For Facility Managers Looking To Save Energy And Money, Four Projects With ESCOs Offer Useful Lessons

By Susan Bloom   Power & Communication
OTHER PARTS OF THIS ARTICLEPt. 1: This PagePt. 2: Building Occupants' Requirements Make Every Energy Project Different

There are plenty of facilities with outdated chillers, boilers, lighting systems and the like. The reason usually comes down to one word: money. To circumvent that obstacle, facility managers can turn to ESCOs, or energy service companies, to provide financing as well as project planning, management and other services.

Those upgrade projects bring heavy-duty engineering challenges. But successful upgrades also require close attention to the softer side of the project.

Effective communication was one of the keys to success of a project in the city of Marshall, Texas. In the face of rising energy costs and outdated HVAC components in its buildings, the city brought in an ESCO to conduct comprehensive energy audits on facility equipment in many city buildings.

Upgrades included lighting retrofits, installation of a building automation system to control HVAC across multiple facilities, and installation of a new chiller and boiler at City Hall. The work was done under a performance contract.

Of course, the project had engineering challenges. Existing energy components such as air handlers in the library and City Hall weren't delivering the airflow they were designed to distribute, and City Hall zones didn't match room configurations. To address these challenges, the air handler coils were cleaned, fan sheaves were changed in two handler units and ductwork was re-zoned to match room configurations.

"When working on buildings that contain outdated equipment and are decades old, design teams should anticipate unexpected issues, costs, and delays," says Chuck Lewis, project manager for Schneider Electric, the ESCO on the project. "Sometimes by just having existing equipment cleaned and re-commissioned as part of the project, you can bring new life to these systems."

The project also yielded insights on technical matters. "When retrofitting the City Hall, replacing the pneumatic actuators on the double duct boxes with electronic actuators proved to be very labor intensive," Lewis says. "As an alternative, we could have taken a second look at replacing the boxes with separate variable air boxes to reduce time spent on this aspect of the project."

But those sorts of engineering issues were only half of the battle. Because the work was being done in buildings such as convention centers that were in constant use, the project team had to ensure that there was no interruption in service or inconveniences to the city. But that didn't mean a leisurely approach could be taken: A chiller had to be installed quickly before the summer heat arrived. Close collaboration between the engineering and construction teams was essential. So was effective communication with occupants.

Communication has also been important in the 12-year, $4.5-million energy savings performance contract that the city of Tallahassee, Fla., is using to improve building operations, boost reliability and comfort, and increase energy efficiency across 45 city facilities.

On this project, communication has been important on two levels. One is traditional person-to-person communication. A working relationship with an ESCO should leave ample opportunities for input to ensure the customer is involved with all decisions.

The city and the ESCO held interactive verification meetings so that Tallahassee officials could see the different project options they had to choose from and how each option would directly affect the overall program.

"They were able to better understand outcomes like payback and savings in order to help prioritize their needs, and this helped get them thoroughly invested in the project," says Ron Blagus, energy market director for Honeywell Building Solutions, the ESCO for the project.

The Tallahassee project involved another form of communication: the transmission of data about building operations. Integration of facility systems is giving Tallahassee visibility into energy use at multiple buildings through a single platform. In addition, meters run though an advanced metering infrastructure system provide near real-time information on a building system level. 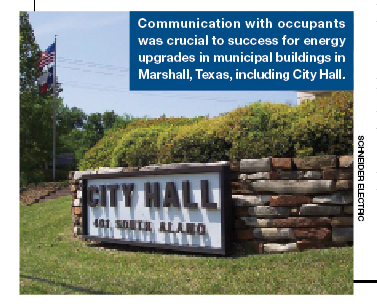 For Facility Managers Looking To Save Energy And Money, Four Projects With ESCOs Offer Useful Lessons