Public restrooms make some people squeamish. But a recent survey from restroom fixture manufacturer Bradley Corp. might help maintenance and engineering managers address those concerns and improve the experience for users in their institutional and commercial facilities.

The Healthy Hand Washing Survey queried 1,062 American adults online Dec. 10-13, 2015 about their hand washing habits in public restrooms and concerns about germs, colds and the flu. Participants were from around the country, were 18 years and older, and were fairly evenly split between men and women (47 and 53 percent). 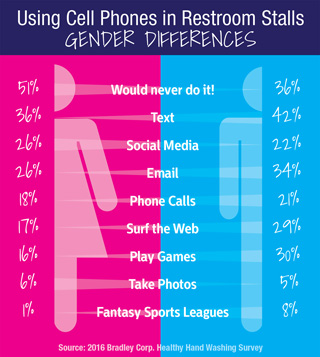 Americans take cell phone breaks in restroom stalls. Using cell phones in restroom stalls is not off limits for the majority of Americans. Texting, checking/sending email, checking/posting on social media and surfing the web are the most common activities. Surprisingly, 6 percent of all survey respondents admit they’ve taken a photo in the stall while 8 percent of men say they’ve checked their fantasy sports league. Since there’s a prevalence of cell phone usage in restrooms, it’s not surprising to hear that London scientists say one out of six cell phones tests positive for fecal matter.

They have an aversion to touching certain restroom surfaces. Americans may not mind handling their phones in restroom stalls, but restroom surfaces are another story. Restroom door handles, stall doors and faucets top the list of surfaces consumers dislike touching the most, followed by countertops, sinks, and soap and towel dispensers.

They use their bodies to avoid touching germs. People go to great lengths to dodge germs in public restrooms. They operate the toilet flusher with their foot, use a paper towel when touching the restroom door and faucet handles, and open and close doors with their hip.

They think poorly of businesses with dirty restrooms. An unclean restroom tarnishes the image of a business in consumers’ minds. Most Americans say that a messy restroom signifies poor management and shows the business doesn’t care about its appearance or its customers.

They report having more negative restroom experiences lately. Almost 70 percent say they have had an unpleasant experience due to the conditions in a public restroom — up from 51 percent in 2012.

They skip the suds …. especially men. While consumers look to businesses to improve their restroom cleanliness, they have room for improvement when it comes to washing hands in these locations. Almost 80 percent say they frequently or occasionally see others leave a public restroom without washing their hands, especially in the men’s room. Men also admit they are less likely to wash up than women — 20 percent disclosed they skip washing because they “didn’t feel the need.”

They identify facility issues that get in the way of washing hands. Of those who acknowledge not washing their hands, most say there was a lack of resources in the wash area — no soap or paper towels. They also blame the sinks, which were either not working or simply appeared too unclean to use.

They have wish lists for restroom improvements. Key enhancements consumers would like to see in public restrooms include more frequent cleaning, access to all touchless fixtures, regular stocking of materials, and lots of paper towels — even if there are dryers. 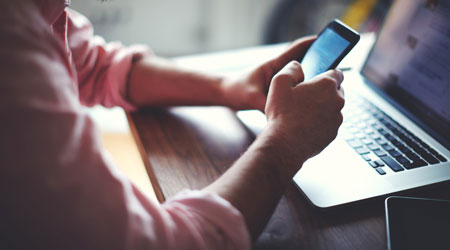 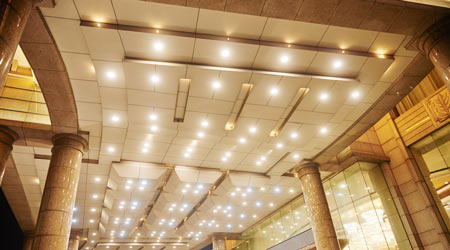