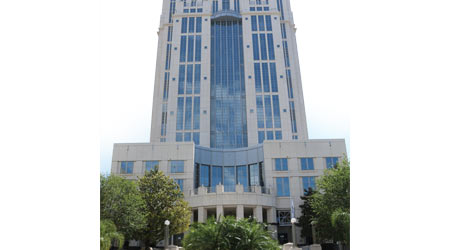 The 23-story Orange County Courthouse in Orlando was among the high-profile county facilities that underwent upgrades in recent years to improve energy efficiency.

With that many facilities over that much space needing so much attention, Steiger and his team faced the task of fully assessing upgrade needs and determining priorities, given their limited resources. They broke the upgrade plan assessment into several components:

Controls analysis. “Are current building automation systems (BAS) operating at peak efficiency and effectiveness?” Steiger asks. “Does the county have BAS specifications that meet the needs of the buildings?”

Certification and compliance. “Is the department working toward Leadership in Energy and Environmental Design (LEED) certification of facilities? Is the county meeting local, municipal and state codes and recommendations for energy efficiency?” he asks.

Costing and recommendations. How much will the initiative cos short- and long-term? Provide a detailed plan for incremental implementation of the recommended actions.

“First, we took on the high-profile districts to make sure they are where they need to be,” he says, referring to county’s five buildings over 50,000 square feet, including its courthouse, administration center and internal operations centers.

“Then last year, the city of Orlando passed a new ordinance that required all buildings within downtown Orlando over 50,000 square feet to report their Energy Star ratings,” he says. “Immediately, we had to come up with a plan to make sure they were above (a) 50 (rating), which is average.”

The department’s upgrade plan assessment resulted in a roster of facility upgrades to Orange County facilities that were designed to maximize the buildings’ energy efficiency while judiciously using available resources. The projects included:

“By 2014-2015, cost savings realizations began to become apparent,” Steiger says. “Return on investment indicators showed up in the form of reduced utility bills, meeting budgeted expenses without requesting additional funding for shortfalls, and the utilization of savings to accomplish additional projects.

The bottom line tells the success of the upgrades. As a result of the projects, building utility expenditures fell from $8.7 million in 2012 to $6.9 million in 2017, Steiger says, adding, “We’re very pleased with the results. You can see those in the utility data that we’ve reduced expenditures.”

The benefits have gone beyond the bottom line, however.

“An intangible realization came by way of increased customer satisfaction due to a decrease in equipment failures,” Steiger says. “And as additional square footage was added to the maintenance inventory, utility costs remained low.”