Here are three options for moving from linear fluorescents to LEDs.
By Lindsay Audin, contributing editor   Lighting
OTHER PARTS OF THIS ARTICLEPt. 1: This PagePt. 2: 8 Tips For Selecting Tubular LEDs

Tubular LEDs with narrow or wide beam spreads may alter appearance and light distribution. In these photos, the camera’s lens was adjusted to highlight differences; all fixtures are brighter than shown. The image is from CALiPER report 21.2, “Linear (T8) LED Lamp Performance in Five Types of Recessed Troffers.”Courtesy of Pacific Northwest National Laboratory, CALiPER Report 21.2, May 2014

Hundreds of products are available for converting linear fluorescent fixtures to use light emitting diode (LED) technologies. While many yield 50 to 60 percent wattage savings, choosing among them may be a daunting task. Some standardization has occurred, but issues exist regarding compatibilities with ballasts, and other concerns.

Some LED devices are being mated with control options such as dimming and occupancy sensing. To get the most out of this technology, envision how your facility’s lighting should look for the next decade (or two) — because it may be that long before LED units start to wear out. Carefully read spec sheets and always “test before you invest.” Buying just what you need for some quick savings could instead leave valuable opportunities unfulfilled.

• Replace each fixture’s lamps, ballast, and lens/diffuser/louver with an LED retrofit kit containing strips of LEDs (sometimes called a “light engine”), a driver (i.e., power conditioning device that replaces a ballast), and new light distribution optics, such as a half-cylindrical lens between angled flat panels.

Many lighting practitioners suggest that — if you’ve got the money — it’s best to buy new fixtures designed to use LEDs. Unlike the other two options, they are optimized for overall efficiency and distribution, with few technical compromises. Where utility or state rebates are higher for new fixtures, making that financial leap may not be as hard as you think.

Nevertheless, many building owners and facility managers prefer to secure the savings offered by LEDs without the costs and hassles of replacing fixtures. That’s where TLEDs come in: The most cost-effective approach may be a simple relamping in which fixture appearance is unchanged, and custodians perform the work. For a few more bucks per fixture, greater wattage and energy cost savings may be available by instead installing retrofit kits. Many offer a fresh modern look, and possibly better light distribution, compared to existing fixtures. Minimal electrical experience is needed, though some jurisdictions may require that an electrician do the work.

Most of the same lighting and efficiency criteria used to measure fluorescent performance apply to LEDs. Due to great work by the U.S. Department of Energy under its Lighting Facts Label program, most LED lighting quality matches or exceeds that of standard fluorescents (www.lightingfacts.com). But there is some new lingo:

• UL has three TLED classifications: Types A, B, and C. Type A uses existing ballasts, making compatibility an issue. Types B and C bypass ballasts but alter a fixture’s internal wiring. Unlike Types B and C, however, UL sees Type A TLEDs as merely a different form of lamp, with appropriately relaxed rules.

• Efficacy quantifies the lumens (i.e., light output of a lamp) per watt of power consumed. Not to be confused with fixture efficiency (proportion of light that escapes a fixture), LEDs are typically much higher than fluorescents, though overlap exists between some low-quality TLEDs and 28-watt T8 (and some T5) fluorescents. The highest TLEDs claim up to 180 lumens per watt, which may be 60 percent higher than comparable fluorescent lighting.

• There’s a new metric specific to LEDs: L70. While lives of fluorescents are based on when 50 percent of lamps burn out, LED chips don’t die, they just fade away. L70 is the number of hours before they fall to 70 percent of initial rated lumen output, after which they may need to be replaced to maintain desired light levels. Many LED chips have L70 of 50,000 hours, with some claiming 100,000 or more. By comparison, half of T8s may be dead at about 20,000 hours, with maintenance relamping needed at roughly 14,000 hours to avoid complaints from burnouts. At 3,000 burn hours a year (typical for an office), a 50,000-hour L70 may not occur before a space has a renovation that includes fixture replacement.

Note that LED drivers may not last as long as the chips they power. Warrantees in LED devices cover both chips and drivers and should be at least 5 years (some now offer 10).

• Beam angle and aperture (also called “beam spread”) vary among TLEDs. While a tubular fluorescent emits light equally in the 360 degrees around its central axis, no TLED does so. Beam angle is the included angle below a horizontal lamp wherein beam intensity is 50 percent or more of its maximum candela intensity (typically directly below it at 0 degrees).

If beam angle is much less than 180 degrees, the foot-candle level on walls or nearby vertical surfaces may be noticeably lower than with fluorescents. Early units (designed for refrigerated cases) narrowly focused their light within about 120 degrees (or less). Better units have beam angles exceeding 200 degrees.

It’s important to understand the difference between beam angle and aperture. Aperture is the angle that contains all light output, with that of better TLEDs approaching (or exceeding) 300 degrees. Tech documents from DOE’s Solid State Lighting (SSL) program note that some manufacturers confuse beam angle and aperture. To be sure, review a unit’s candela distribution curve (often called a “batwing”) found in the unit’s IES file. It shows intensities at all angles around the axis of a bare lamp. If a manufacturer cannot supply such data, move on to another that can.

The image above shows how tubular LEDs with narrow or wide beam spreads may alter appearance and light distribution. (The image is from CALiPER report 21.2, “Linear (T8) LED Lamp Performance in Five Types of Recessed Troffers.”) Tight beam spread is a trick to increase TLED wattage savings. By narrowing it, foot-candle levels on horizontal work surfaces may be maintained with fewer total lumens. Lumens previously distributed elsewhere are not generated, so fewer watts are needed. A 1700-lumen TLED in a standard lensed troffer may provide the same horizontal foot-candle level as a 2500-lumen T8 fluorescent — but nearby walls may look darker, creating a “cave effect.”

That may work with a parabolic-louvered or lensed fixture, but putting the same 1700-lumen TLED into a direct-indirect fixture may cause a 15 to 20 percent drop in horizontal foot-candles. To assess impact, relamp an entire room having the same type of fixture. Higher output TLEDs (up to 2250 lumens for 4-foot units) are available with wide beam angles, and may be necessary to maintain both acceptable foot-candle levels and distribution. Wattage savings may be a bit lower, but nobody will complain about the lighting change.

A recent (2016) innovation responding to this issue is the “dual shine” TLED. It features two rows of LEDs in a single tube, one pointing down and the other upward. Designed for indirect and direct/indirect fixtures, a unit shines all around its 360 degrees axis, though intensity varies significantly if the bulb is not frosted. To assure acceptability, do a side-by-side mock up with fixtures containing TLEDs and existing fluorescents in the same room. 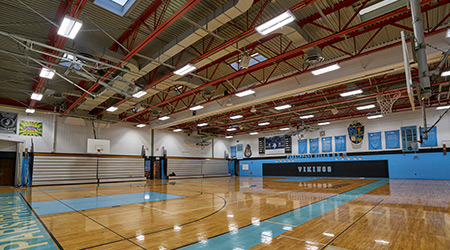 Making LEDs Work at Your Facility