TLEDs are evolving rapidly, and now there are more options than ever before for retrofitting quickly and seamlessly.
By Lindsay Audin   Lighting
OTHER PARTS OF THIS ARTICLEPt. 1: Understand The ABCs of LED Retrofit Kits Pt. 2: This PagePt. 3: How To Future-Proof Your Lighting

A recent (2016-17) development is the hybrid “dual drive” TLED. Type A/B units may be installed as Type A “plug and play” units using fixtures’ existing ballasts, but — if a ballast eventually fails — continue to be used as a Type B, with appropriate rewiring. At least one Type B unit allows its internal driver to be replaced, instead of dumping the entire unit if the driver fails. At least one manufacturer now offers a Type A/C TLED that may be installed as a Type A, but comes with a separate driver that (like standard Type C units) may be installed to replace a fixture’s own ballast when the latter fails.

To address TLED lampholder issues, NEMA issued (February 2017) a standard for a new type of lampholder and lamp base (designated G6.6) specific to TLEDs. It will accept a range of voltages and eliminate other issues, such as replacing a TLED with a standard fluorescent lamp. It is unclear at this time if TLED manufacturers will offer products that fit the new standard.

One issue (which pertains to both TLED lamps and retrofit kits) that has escaped much attention is flicker. Decades ago when magnetic ballasts were standard for fluorescent lighting, some people complained of headaches due to the low frequency non-visible flicker (120 cycles per second, or Hz) they caused (not to be confused with visible flickering when a fluorescent lamp is nearing burnout). Several medical conditions exist (e.g., photosensitive epilepsy) wherein it may cause migraines or behavioral problems. Depending on the intensity and harmonics of such flickering, bar code readers and other types of light-sensitive equipment may also be affected.

Once electronic ballasts made magnetics obsolete, that problem disappeared: electronic units run at 40,000 Hz, far beyond human sensitivity. Unfortunately, no flicker standard exists at this time for TLEDs or retrofit kits. A recent side-by-side test of 6 brands of TLEDs and 3 brands of kits found that 2 of the TLEDs and 1 of the retrofit kits produced detectable 120 Hz flicker. To avoid this issue, a sample (sufficient to work in several adjacent fixtures) should be tested before making a quantity purchase. The flicker may be detected with the same devices (e.g., Discriminator, Flicker Checker) used years ago to check for magnetic ballasts, or a cell phones equipped with a TV camera. In the latter, dark bands will appear to be moving across the screen, the result of the out-of-sync flickering of the LED and camera.

While TLED units maintain the look (good or bad) of existing troffer fixtures, LED retrofit kits may instead improve them and their light distribution, though at a higher total cost per fixture. While kits vary in construction and appearance, each contains: a driver, LED chips mounted on circuit boards, and maybe a different optical distribution system. Some drivers are permanently mounted on the same boards as the LED chips, while others do so in sockets that allow easy replacement if a driver burns out. Existing lampholders are not used, thus avoiding that issue.

Some kits offer built-in control options, such as bi-level output, daylight dimming, or motion sensors. All require bypassing (and maybe removing) existing ballasts. Due to fixture rewiring, any kit being considered should have a UL label to maintain a fixture’s UL Listing.

While kits vary in design, they fall into three categories based on use (or replacement) of existing optical distribution systems, e.g., lens, diffuser, or louver.

1. Those that work with existing optics utilize strips of LEDs mounted on aluminum extrusions attached to the body of a fixture. (See Figure 1 below.) A tubular diffuser slips into slots in the extrusion, producing what (to the unsophisticated eye) may look like a tubular fluorescent lamp.

2. Others replace existing optics with new distribution that may widen beam spread and make an old fixture look new. (See Figure 2 below.)

3. An almost revolutionary version looks like a thick (roughly 1⁄2 inch) acrylic diffuser, which also contains the LEDs, their driver, and a quick connector. In troffers, it replaces the existing lens, diffuser, or louver, while allowing the existing lamps and ballast to remain in the fixture. Doing so avoids labor to remove them and disposal cost, while allowing reversion to the original condition if the LED unit fails. 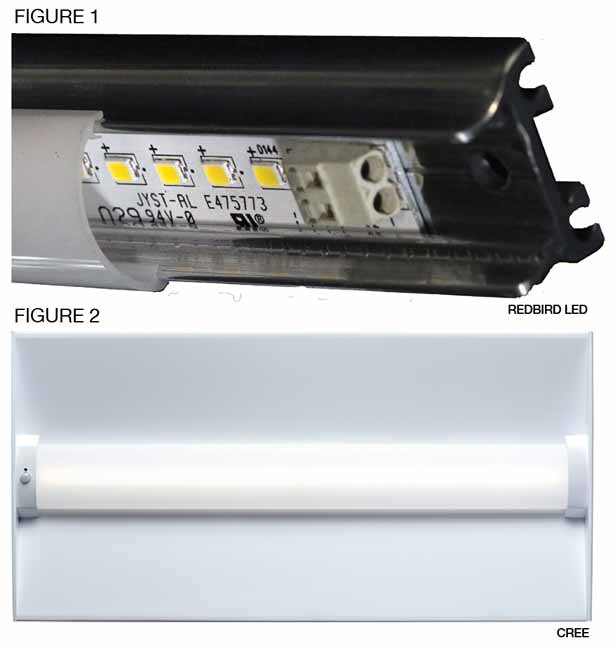 (Figure 1. LED retrofit kits that work with existing optics utilize strips of LEDs mounted on aluminum extrusions attached to the body of a fixture. A tubular diffuser slips into slots in the extrusion. Figure 2. Some LED retrofit kits replace existing optics with new distribution that may widen beam spread and make an old fixture look new. Note infrared motion and light sensors at the left end of the unit.)

All are available with built-in dimming drivers, and versions of the first two may include occupancy sensors. In Figure 2, note the infrared motion and light sensors at the end of the unit. Compatibility with existing or proposed dimmers should be field tested before bulk purchasing. In all cases, verify that beam angle is acceptable via a test in a typical room, and that weight and stability will not compromise the existing fixture’s mounting.

Depending on the wording of local energy codes, retrofit kits may not (like new fixtures) trigger requirements for installation of bi-level or occupancy controls, but utility rebate rules may reward them almost as much. Sharp facility managers may find opportunities by closely reading the wording of both.

Many kit manufacturers claim their units can be installed in five minutes or less. Some involve multiple parts while others are pre-assembled units. Not all will fit into every type of existing fixture, though many are designed to fit those already mounted in standard hung ceiling T-bars. Familiarize technicians with the installation procedure of a proposed kit in a sample fixture while it’s on a work bench, before trying to do so from a ladder. Time how long a sample takes to install, and note any issues or modifications needed to make a kit work. If installation looks problematic, move on to another brand. 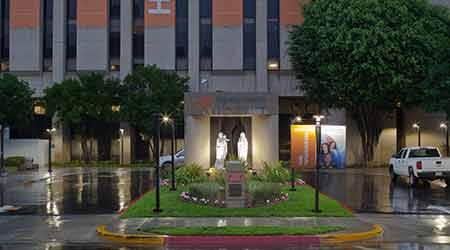