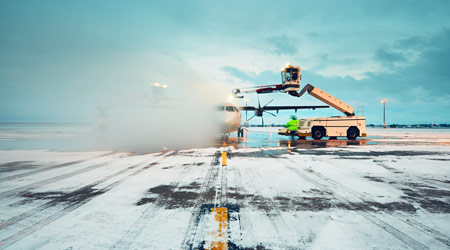 In a finding that could affect the design and performance of external HVAC components in institutional and commercial facilities, researchers at Virginia Tech have determined it is possible to prevent frost formation on surfaces without the use of chemicals or heat.

By patterning untreated aluminum with microscopic elevated grooves, researchers observed that up to 90 percent of the surface remained frost-free. The so-called ice stripes act as sacrificial low-pressure areas where frost forms first, attracting humid air away from the majority of the material's surface, researchers say.

Potential applications of this research include the external components of heat pumps and fans. The HVAC industry already patterns these with micro-fins, but optimizing the pattern would prevent frost from building up inside the systems, researchers say. Airplane wings are another first-use case for anti-frosting materials.

The researchers also found the frost formed more slowly on the ice stripes than on a conventional surface, and the ice formed in suspended state above the surface of the stripes, potentially making it easier to remove, according to the research abstract in ACS Applied Materials & Interfaces.

Though the research was conducted on untreated aluminum, researchers say most materials that could be patterned with raised grooves to create the required pattern of sacrificial ice formation could be made frost-resistant.