But, when it came time to replace the heat-pump water heater at the Hardee’s restaurant at Azalea Plaza in Wilmington, N.C., management knew a like-for-like replacement strategy was not the best choice.

“We are receptive to innovative technologies, especially if they will yield greater energy efficiency,” says Rick Hammock, director of facilities management at Boddie-Noell Enterprises in Rocky Mount, N.C. Boddie-Noell is the largest privately owned franchisee of Hardee’s nationwide, with 306 locations in four Southeastern states.

The search for something new and more energy efficient was not the main factor in Hammock’s decision-making process. The old heat-pump heater was efficient enough but it just wasn’t effective, routinely failing to provide enough hot water during periods of peak demand. The shortfall in performance was glaring in the hour or so following the lunchtime rush, when the restaurant’s staff was busily washing pots, pans and dishes, as well as cleaning the floors in anticipation of evening traffic.

“We often had to wait for the heat-pump unit to recover before we could begin those cleanup chores,” says regional facilities manager Pete Colletti, whose area of responsibility includes the Wilmington Hardee’s.

After consulting with Richard Pettyjohn of RepSouth, the sales agent for Rheem Water Heating in North Carolina, Hammock specified something different: an Eclipse commercial electric water heater. The unit has an input of 24 kilowatts, 85 gallons of storage, a 10-year tank warranty, and a recovery capacity of 124 gallons with an 80-degree rise in temperature.

The 10-year warranty stems from the construction of the unit’s seamless, blow-molded polyethylene tank that resists rust and corrosion that can curtail the operational lives of conventional water heaters. Because it is nonferrous, the tank needs no corrosion-fighting anode rod, which averts any potential odor problems due to the chemical makeup of the local water supply.

“A restaurant offers many challenges where the water heater’s exterior, polymer jacket seems to be more durable than the typical metal exterior,” Hammock says. “With this in mind, I don’t see corrosion being a problem.”

The number one benefit of the water heater is its ability to meet the restaurant’s hot-water demand. Boddie-Noell contracts with EcoSure Audits to visit its restaurants every four months to ensure they are maintaining the highest standards of the restaurant industry, Hammock says. One of the key audits involves measuring the water temperature at certain appliances.

“We expect 160 degrees in our three-compartment pot sink where the dishwashing is done,” Hammock says. “And we maintain 105- to 110-degree water at our hand sinks. The heat pump struggled to maintain those temperatures, but we’ve had no problems running out of hot water with the Eclipse.

“We must ask a lot of a water heater at the Wilmington facility. But we have been very satisfied with the performance of our new Eclipse and would certainly consider it for our other franchise operations.” 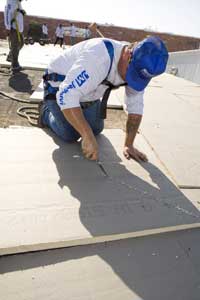 The Maury County School District in Columbia, Tenn., had to replace numerous roofs that received multiple applications and repairs during the past 20 years. The area had sustained a considerable amount of hail, and the original roofing systems, which were installed without a cover board, had been damaged substantially over time.