By Casey Laughman, Managing Editor   HVAC
OTHER PARTS OF THIS ARTICLEPt. 1: Knowing What to Look Out For Critical When Upgrading HVAC SystemPt. 2: For a Successful HVAC Upgrade, Good Timing is EverythingPt. 3: This PagePt. 4: Product Showcase: HVAC

While it's certainly possible to replace one particular piece of an HVAC system and not touch the rest for 10 years, it's not likely. When considering upgrading one piece, take a look at everything else, as well.

"You wouldn't want to replace one piece and not consider the other pieces," Ulrich says. "If you have a chiller that's reaching the end of its useful life, you have to consider the condition of the cooling tower. It's a mistake to replace the component of a system that has an obvious problem and not have the foresight to take a holistic look at it and say, 'the chiller's 30 years old and it has a problem, what else is that old?'"

One good place to start when looking for other areas that might be affected by an upgrade is the control system. If you have a legacy control system, you're running the risk of either limiting your upgrade options or not getting the most out of them.

"I wouldn't limit myself with an old BAS or energy management system and have that tail wag the dog, if you will," Bamonte says. "I wouldn't say, 'since the controls can't handle certain types of equipment, let's not go down that road.' I would start with the main equipment and then work from there."

Other things to consider have more to do with the building's infrastructure than anything else, such as ductwork and piping. And, Bamonte points out, don't just assume that a new piece will fit in its intended spot — or be the right weight to be supported if it's a rooftop unit.

Codes play a part as well. With HVAC components having such long lifespans, codes can change multiple times from the time an HVAC product is installed until the time it is replaced.

"Say I've got an A/C unit in the middle of a 20,000-square-foot floor," says John Fallon, vice president of service for Donnelly Mechanical. "I want to change it, but now the code says I have to have fresh air going to it. It's in the middle of a floor. How am I going to get fresh air to it?"

There's one other consideration before diving into upgrades, says Fallon.

"If you're going to be there five years or longer, then I would be looking at upgrading," he says. Less than that, and stretching a system's lifespan while repairing when needed becomes a more attractive option.

Regardless of how many parts of an HVAC system you're going to replace, how much money you're going to spend or how long it's going to take, one big factor is making sure that everyone's on the same page.

"But even more important is to talk to the occupants of the building. If we've had any slips, if you will, it's when we haven't successfully communicated to customers what we're thinking, what the plans are for the project, what's the timeframe, what are our expectations, what are the expectations for you, the tenant."

And in the end, equipment is important, but so is operating it correctly.

"The fundamental piece of it is the quality of the operating staff," Ulrich says. "How well you take care of (equipment) really has an effect on its useful life. The manufacturers make some pretty darn good equipment that stands up over time." Bamonte agrees, pointing out that a control system is only as good as its operator.

"You can have the greatest energy control system out there, but if it's not properly utilized by property management or facilities management, you'll have wasted the dollars and lost opportunity on the potential energy savings going forward." 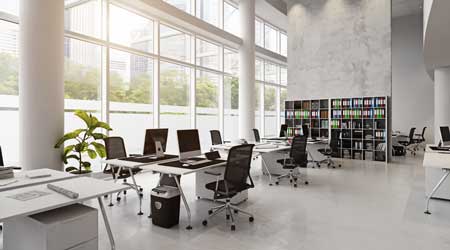