When looking for energy savings in an existing chiller plant, or plant renovation, look deeper than the chiller itself. Though the chiller may have the largest peak load of any component, it may not be the largest contributor to total annual energy consumption. It’s more important to look at how all the components work together throughout the year to achieve the greatest savings. Paying attention to part-load efficiency is key to getting maximum savings.

There are also simple and low- or no-cost operational changes that can be investigated to greatly reduce the energy use of an existing system, without risk to proper plant operation or occupant comfort. Here are five steps to consider.

Many engineers and facility managers compare chiller efficiency based on a single number — peak load kW/ton. Many manufactures also focus on this number in their marketing. However, the typical chiller plant in a commercial building will never operate at these peak conditions. For office buildings, it would be better to ignore the peak kW/ton and instead compare the IPLV (integrated part load value) or NPLV (non-standard part load value) ratings from the Air Conditioning, Heating, and Refrigeration Institute. Even though each building’s load profile is unique, these numbers are meant to be a better metric for comparison since they attempt to simulate a more typical load and operational profile for an office building in a moderate climate. IPLV uses four operating points instead of just the peak. It assumes 44 F chilled water supply temperature, 10 F chilled water delta T, and the following annual operation:

If actual design conditions are much different than these assumptions, chiller manufacturers can provide NPLV values for non-standard entering water temperature and flow rates, which would be a better metric for comparison.

Most chillers, even older ones, can benefit from condenser water temperature reduction during cooler weather. A chiller may be sized based on 85 F water coming from the cooling towers, needed for the very few very hot and humid hours of the year. For the rest of the year, the towers can easily and efficiently provide cooler water. Chillers can use cooler water without risk to save energy.

Constant speed chillers also benefit, but only about 5 percent efficiency gain for every 5 degrees of chilled water relief. Although cooling tower fan energy will increase with a chilled water temperature relief strategy, chiller energy savings normally more than outweigh fan energy increases. Savings depend on climate, load profile, and equipment sizing, so an analysis should be performed to determine the proper control strategy.

The interplay of three factors has a significant impact on chiller efficiency: entering condenser water temperatures, chiller loading, and whether the chiller is constant- or variable speed. The following charts list typical chiller efficiencies in kW/ton for differing combinations of those three factors. 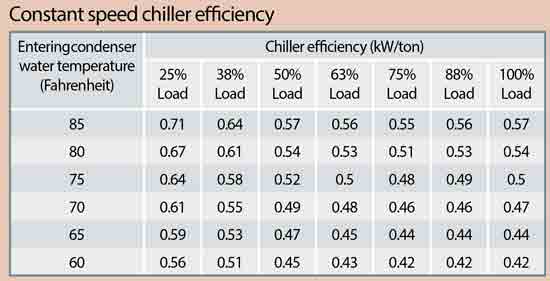 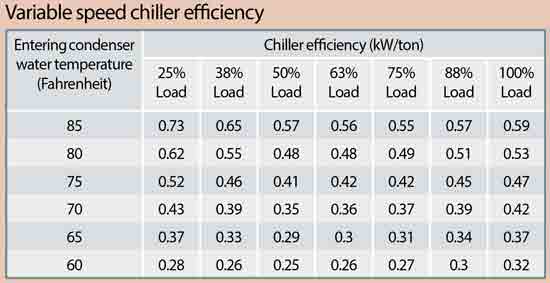 HVAC Systems: To Centralize or Decentralize?