Four-pipe Fan Coil Unit Systems: Is It Right for Your Facility?

When evaluating this option, be sure to consider the type of facility and to incorporate advanced features.
By William P. Ljungquist   HVAC
OTHER PARTS OF THIS ARTICLEPt. 1: With Advanced Features, Fan Coil Unit Systems Can Achieve Today’s Energy Efficiency GoalsPt. 2: Understanding Chilled Beam Systems: Passive and ActivePt. 3: Pros and Cons of VAV and Dedicated Outdoor Air Systems (DOAS)Pt. 4: This Page

The drawbacks of four-pipe fan coil unit systems include:

• Because of the unit fan, the system consumes more fan energy as compared to a chilled beam system, which has no terminal unit fan.

All facilities are unique and their system selection should be carefully evaluated from both qualitative and quantitative perspectives. In many cases, a four-pipe fan coil unit system is an appropriate system selection; in other cases, it isn’t. Facilities where a four-pipe fan coil unit system should be strongly considered would include these characteristics:

• Facilities where most spaces will have high sensible heat ratios (i.e., relatively low occupancy density such as housing/residential or office).

• Facilities with minimal occupied interior space which would require winter cooling (an all air system with economizer is preferred for serving occupiable interior areas).

An example facility that would include all these characteristics is a large student housing facility served by a campus chilled water plant.

To optimize the fan coil unit system efficiency, the following features could be applied:

The graph below represents actual building energy modeling results for a large higher education housing facility using a four-pipe fan coil unit system with many of the features described above. The modeling results demonstrate an energy cost savings of approximately 42 percent as compared to the ASHRAE 90.1 – 2010 Baseline Building. These results exceeded the project’s energy goals and mandates. Similar results have been realized for other projects using a four pipe-fan coil unit system. 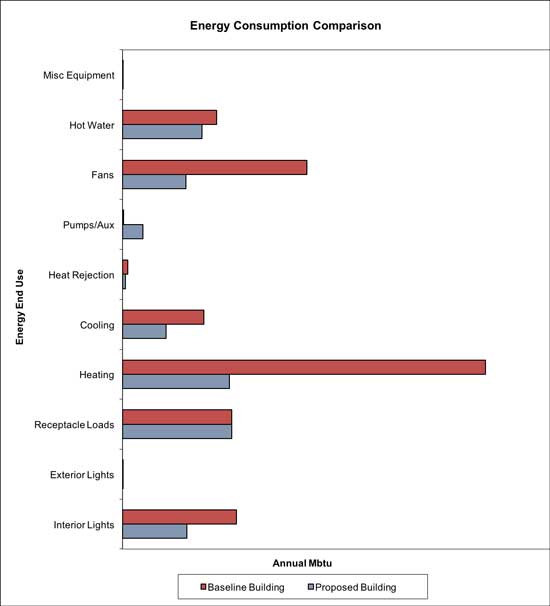 Advances in HVAC equipment design and controls technology, coupled with mandates for increased energy efficiency, have led to HVAC terminal unit designs such as chilled beams and DOAS terminals which are thought of as state-of-the-art systems. The same technologies and design strategies incorporated into these system types can also be applied to a four-pipe fan coil unit system, resulting in system efficiencies that meet and exceed today’s energy efficiency goals and mandates. 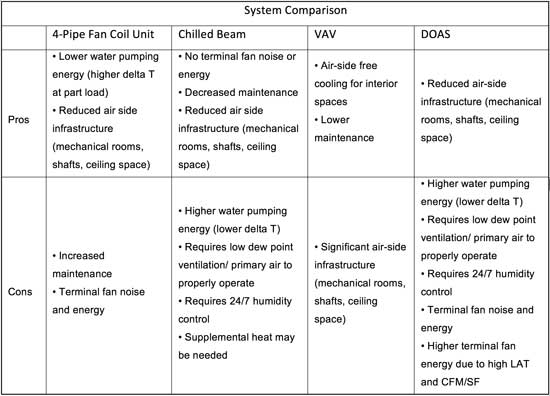 Four-pipe Fan Coil Unit Systems: Is It Right for Your Facility?