The other avenue of attack — setting up the ambulatory sites — is where the bigger challenge lies for Crimmins' team. The thrust has been to take the services that would have been borne out in the hospitals and put them out into the community in medical office buildings and, in some instances, in business occupancy buildings, Crimmins says. And once you move off the known world of the hospital campus, everything from code compliance to management strategies becomes a learning opportunity.

As a sample, over the last five years, four sleep centers have been added. In the western suburbs, there's a 60,000-square-foot building built almost four years ago where Crozer-Keystone holds the master lease. Immediately adjacent is another 60,000-square-foot building — the master lease of which is also held by the organization — that is being built out to house a cancer center.

"We're in the process of building a linear accelerator and a medical oncology suite in an office building that we don't own," Crimmins says. "These are things the typical office building is never involved with."

The linear accelerator, for example, sits just outside the main building envelope. It requires a vault with 5-foot thick concrete walls. The facility will require specialized HVAC and emergency power, significantly beyond that required by a typical office building.

As well, even though you can take a service out of a hospital, you can't take the regulations and level of review out of the facility housing the service. Not only will there be a cancer center in the new building, but also a gastrointestinal lab. Though it is only 4,000 square feet, the lab triggers Pennsylvania Department of Health regulatory review, which was an unexpected turn due to recent changes in what classifies as ambulatory versus business occupancy. In any situation where even one patient is incapable of self-preservation (basically whenever an anesthetic agent is being used), the facility is classified as ambulatory and a whole different level of review, which was totally foreign to the developer, comes to bear. Alterations to the base building had to be made because of different fire ratings required, and fire system and emergency power testing frequencies and procedures are stepped up.

"It adds some complexities to the construction process when we're off the campus," Crimmins says. "With the hospital, you know what you're dealing with. But you get out into these communities, and it's a whole new ballgame for everyone."

Even labor politics get into the mix. The developer typically does not use union labor, while on the hospital campuses, Crozer-Keystone typically does. In these satellite facilities, while Crozer-Keystone is not the owner, as the major tenant their name goes up on the building and that's when the pickets and phone calls start. Just another wrinkle to iron out when you move off campus, Crimmins says. 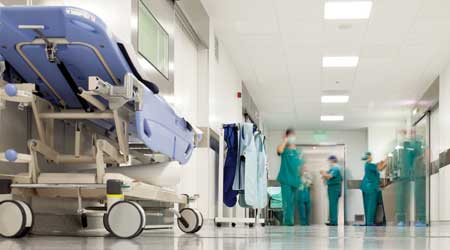