Crimmins began his career in general hospital administration with the Detroit Medical Center. As he trained in two hospitals at that system, he always tried to get placed with various clinical departments to stay on the path of general hospital administration. But he kept gravitating back to the facility side. It ended up giving him a well-rounded perspective on the needs of a health system. Though he's the one to have to make the tough calls, Crimmins' approach is not top-down, viewing his role less as director and more as collaborator with his team.

At Crozer-Keystone, Crimmins operates with a lean team. There are three facilities directors over the five hospitals and 40 satellite facilities. There is also a director of real estate and a team of five in property management that report back to Crimmins.

"For the most part, we all wear several different hats," says Anthony Salvatore, director of facilities services at Taylor Hospital and Springfield Hospital. Twenty years ago, there might have been a director each for facilities, environmental services, and safety and security. Not anymore. It's harder because there's more work. But, he concedes, "it's easier in that you can't have a disagreement between three different departments if one person is running the three different departments. There's more directed vision. You see it one way."

As services move out from the centralized hospital campus to smaller, often less complicated, facilities in the community, it creates more moving parts for Crimmins' team to track and dilutes available resources for operations and management. Recently, on a committee related to Joint Commission standards, all of the off-campus sites and who is doing what were put on one spreadsheet, which was an eye-opening experience. "It's no longer one hospital and you know what you have. We've got stuff all over the place now," Crimmins says. And with 40 and growing off-campus sites, the trick is to know who is responsible for what, especially when the Joint Commission or the Department of Health comes calling.

The number of off-campus sites presents a sheer physical logistics challenge. Currently, the set up is that each hospital's director is also responsible for the sites generally in the hospital's geographic area. For example, Salvatore has eight in his zone. "It's a challenge to give them the time and energy they deserve," he says.

Salvatore, who also sits as a representative on the national board for the American Society of Healthcare Engineers, sees the trend will be more branching out into the community. "We're looking at more outpatient services, more outpatient facilities," he says. "So the idea that these places are going to be strewn around the county is going to continue to grow." A strategy being considered is putting all of the ambulatory sites under the supervision of a single facility director or under the property management department to help keep things from falling through the cracks.

And of course there's the ever-present strategizing of operating increasing square footage with limited budgets. Crimmins has a seat on the hospital's capital allocations committee, where he tries to be impartial and has to make decisions that might not always be popular with his team.

For example, the main data room for the health system has been maxed out in terms of the amount of power and emergency power its facility can deliver to it. So a secondary data room is being built out to relieve the pressure and create some redundancy. "Spending the money to build that data room I'm sure raised some eyebrows with some people," says Crimmins. There's always the need for capital in a hundred different directions: new patient care equipment, new roofs, etc. The new data room will be in a more remote location, isolated from where most of the hospital would see it. But it's Crimmins' job to understand the need where others don't.

"With everything becoming more and more computerized, should (the data center) have a problem, it really cripples the whole system," he says.

When Crimmins looks to the next five to 10 years, he sees a continuation of tuning the health care facilities portfolio to meet the needs of the customers. As inpatient numbers continue to fall at the hospitals, some of the spaces might be converted to outpatient purposes. Some of the smaller ambulatory sites will be consolidated into larger sites, where you can get more critical mass and gain some staffing and operations efficiencies.

"It all goes towards finding the most cost-effective way to deliver the highest quality of care," he says. 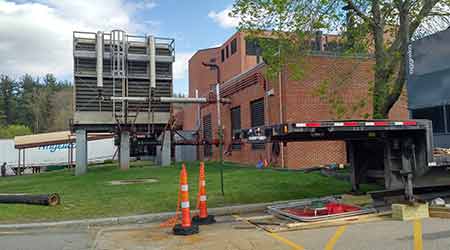 Retrofit Strategy: Managers get Involved from Day One