Never knowing when Mother Nature might strike maintenances and engineering managers need to be prepared for all kinds of weather related scenarios that could harm their commercial or institutional facility — including floods.

Fast-moving flood waters caused mayhem in Ellicott City, Md., on Sunday, triggering an emergency declaration and urgent messages for residents to seek higher ground, according to a report from NPR.

Intense flooding hit the town's Main Street in at least two waves recently, shoving cars down the street and bursting through storefronts – including at several buildings where people found themselves suddenly trapped in stores and restaurants.

Mark Hemmis owns the Phoenix Emporium restaurant on Main Street, which was badly damaged in 2016. Here's how he described Sunday's flood to NPR's Mary Louise Kelly:

"It started out as [water] pooled around the sides of the road, a couple inches deep on the curb. Then it covered the road. Once it came over the curb, we brought all the customers up to the second floor. Then it got bad from there. The water ended up being six, seven, eight feet deep, coming down Main Street."

Images and video from the scene are striking, showing fast-moving water rising nearly as high as the bottom edge of the streets' stop signs and obliterating anything in the torrent's path.

Rain storms in the area have been growing more intense in recent years, according to an expert who also says the flooding is linked to how the area's land surface has changed.

Founded in 1772, Ellicott City's Main Street and downtown have been designated a historic district. After the 2016 flood, the city barely avoided having to tear down any buildings in a long and expensive rebuilding effort. 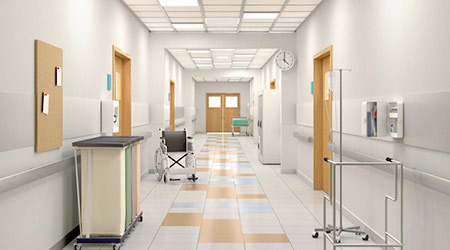 Saved By Signage? App Shows the Way in Hospitals