Options abound for these grounds care workhorses. Which ones are essential for efficiency and success?
By Renee Gryzkewicz   Grounds Management

Grounds care managers have an array of utility vehicles to choose from that feature various functions and characteristics, such as hydrostatic transmissions, hydraulic bed lifts, and diagnostic gauges. Managers also can consider a variety of accessories for these vehicles, such as plows and trailers. A thorough understanding of these options can help managers specify a vehicle that matches their needs.

Besides seatbelts and back-up lights, many of today’s utility vehicles feature rollover protection systems (ROPS). For some individuals, ROPS might not be important, says James Burnside, product manager of utility vehicles for Kubota Tractor Corp.

“For me, personally, I wouldn’t get any utility vehicle without a roll-over protection system. I’ve seen too many of them roll over,” he says.

It is important for managers to specify utility vehicles that feature ROPS certified by a manufacturer or independent organization, says Jerry Sandy, product specialist for Husqvarna.

“Some vehicles on the market have rollover protection systems that are not certified,” Sandy says. “You don’t want to be in those vehicles when they roll over because you don’t know how well the system has been tested.”

Improvements in braking systems also have made many utility vehicles safer.

“Moving to hydraulic-assisted disk brakes that are similar to those used in the automotive industry is a trend in the utility vehicle industry,” Sandy says. Braking is particularly important for today’s utility vehicles because of the amount of weight they are capable of carrying — from 800-1,500 pounds. It is essential to have a good braking system.

“A hydrostatic transmission has a characteristic called dynamic breaking,” Burnside adds. “It holds itself back so you can better control your speed.”

The better performance is thanks to a combination of new battery configurations and energy controls and more efficient motors, Skenes says.

Managers have a range of electric vehicles to chose from to meet their staff’s needs — whether workers want to use it to transport some hand tools or 500 pounds of sand. A vehicle’s run time often depends on the terrain on which it is used and the weight of the load it is carrying.

“The only negative to electric vehicles is that they have to be charged everyday and have a limited run time,” says Brad Haerle, director of sales for Club Car. “You could get 35-52 miles, depending on how the vehicle is loaded and how it’s use.”

Electric vehicles tend to be quieter than their gas and diesel counterparts, and they tend to require less maintenance. The most critical maintenance task is to regularly check the water level in the batteries, Skenes says.

Manufacturers of utility vehicles also are striving to make their gasoline machines more fuel efficient and economical to operate, and users have seen significant improvement in the last 5-10 years in both gasoline- and diesel-fueled vehicles. Diesel vehicles have particularly improved, Burnside says. They tend to be smaller, more compact, and cleaner, and they don’t make as much noise as previous generations of vehicles.

“You might run a third longer on a tank of diesel than a tank of gas,” Burnside says.

When specifying a utility vehicle, managers will need to carefully consider how their workers plan to use the vehicle.

“You’ve got to buy a utility vehicle based on your needs,” Burnside says.

Adds Skenes, “The first thing users need to consider is how they are going to use it. Managers should consider how much weight they want the vehicle to transport. Don’t buy a vehicle that has only a 500-pound capacity if you’re going to expect it to haul 1,200 pounds. I recommend that they do a very careful analysis of how they are going to use the vehicle. That way, they can make sure they’re not under or over purchasing for their needs.”

Many manufacturers allow customers to test out a demonstration unit for a few days.

Says Skenes, “Ask the dealer if you can try it for a few days. That is a good way to find out if a specific vehicle is what you’re looking for or if you need to look at a bigger model or smaller model.” 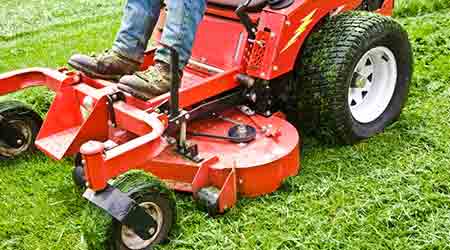 Commercial Mowers and the Sustainability Connection 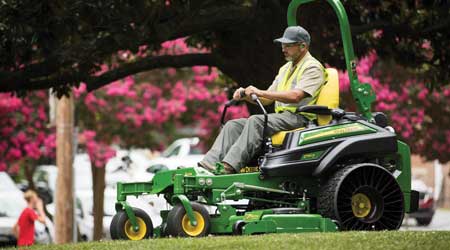