The Legalese of Green

Also in this report

The Legalese of Green

From Somber to Silver

The meteoric rise of the green building industry has given rise to several unintended consequences. One is the question whether or not some of the new strategies used in green buildings open owners and design teams up to greater liability.

So far, there has been little discussion of how owners can address green building in their design and construction contracts to mitigate liability. But it’s an issue all facility executives must consider before taking on a green building project.

Reducing the likelihood of problems is the best way to avoid liability. In green building, this is first accomplished by making the decision to build green at the earliest stages of project planning. Studies consistently show that green building is cost neutral when adopted early.

Likewise, the potential for problems increases when green building is added as an afterthought to an existing design. Most importantly, early adoption enables owners to build a project team that has the requisite green building experience. Solicitations for design and construction professionals should convey the owner’s green building goals, including any desired level of LEED certification, and request detailed explanation and references demonstrating not only the respondents’ green building experience but that of their subconsultants and subcontractors as well.

For public projects and other situations where competitive bidding is required, owners should use a pre-qualification process to provide a field of qualified bidders. Claimed experience should be incorporated into project contracts as representations and warranties.

The experience of any firm is only as good as the people it assigns to manage the project. Owners should require their architects, engineers and contractors to assign project managers or superintendents who have solid green building experience, and they should be identified by name in the relevant contracts. Professional certification as a LEED Accredited Professional is highly desirable.

Problems frequently occur when a contractor or architect changes staffing during a project. That’s because the replacements have no experience with the project or players. This is especially true in green building. Project contracts should prohibit architects and contractors from changing designated project managers or superintendents without the owner’s prior written consent.

As with any construction project, it is essential that responsibilities be clearly assigned among the project team. Contract and construction documents must clearly assign responsibility for each green building element to avoid confusion, especially among subcontractors who often have less green building experience and understanding. This is especially true for projects seeking LEED certification, because the U.S. Green Building Council (USGBC) certifies projects based on submittals that show that each credit was actually implemented.

The LEED scorecard listing each point the project seeks can be a useful tool in this effort. Because documentation is so pivotal, contracts should clearly assign record-keeper responsibilities among the project team in a form that is consistent with LEED requirements.

Contracts should also specify a tracking process to monitor ongoing and timely submission of necessary information. Doing so will help avoid omissions that can be difficult or impossible to recreate after the fact. Such omissions can jeopardize LEED credits and certification level.

Some green building materials and equipment with long lead times may require advance ordering to ensure timely delivery and avoid project delays. Contractors should be required to identify any such items in an early submittal and contract payment provisions should be modified to permit contractor invoicing before such items are used on the project.

Care should be given to ensure that “or equal” clauses in the specifications do not jeopardize green building goals. Appropriate findings should be included in public works contracts to avoid applicable laws that might otherwise permit undesired substitutions.

Project contracts should also include waiver language prohibiting designers or contractors from relying on compliance with green building or LEED requirements as a defense to traditional construction and design claims. For example, the contractor or architect should not be able to escape responsibility for a roof failure by blaming the added weight resulting from the owner’s requirement that solar panels be installed on it.

Instead, require designers and contractors to bring such issues to the owner’s attention before the start of construction so that problems can be addressed early and liability placed on construction and design professionals. Owners should also pursue extended warranties or performance guarantees for experimental or innovative building systems.

Owners should enforce green building requirements by specifying that each project participant’s failure to perform their respective green building obligations is a breach of contract and basis of contract liability, along with appropriate force majeure provisions to accommodate causes beyond the party’s reasonable control.

Prime contracts should define substantial completion in a manner that obligates the contractor to complete building commissioning to ensure that building systems are performing optimally before being relieved from potential liability for late completion.

Design contracts should similarly require their services to continue through project completion and, where applicable, LEED certification, so that the design team is similarly invested in achieving prompt certification and responding to any questions that may arise during the LEED evaluation process. Owners might also consider contract provisions entitling them to hold back some money until the project receives the desired LEED certification.

The carrot is oftentimes more effective than the stick. Owners should consider financial incentives to contractors (prime and subs) who provide successful suggestions leading to improved green building performance or additional LEED points. These create a positive environment where the whole team is encouraged financially to advance the owner’s green building goals.

Finger-pointing among construction and design team participants is common when green building requirements are not met. Owners might consider contract provisions that require the parties to participate in binding arbitration to apportion responsibility that is separate and distinct from the broader claims process. Preference should be given to selecting an arbitrator with green building experience, such as LEED Accredited Professionals.

Finally, many government incentives (see “Understanding Green Building Incentives,” below) are issued before the project has been certified, so permitting authorities often include the applicable green building or LEED eligibility criteria in project conditions of approval. Developers and owners should ensure that the local policy or permit documents specify the consequences if the building does not actually achieve the specified green building goal. Otherwise, they risk an unpleasant situation where they have little bargaining power.
Green building is the natural progression of construction. Owners and developers seeking to maximize their investment are wise to build green. But like everything else, new ways of doing necessitate new ways of thinking.

Donald Simon is a partner at Wendel, Rosen, Black & Dean, LLP in Oakland, Calif., where he advises clients on transactional and litigations matters surrounding construction, green building and real estate. He is president of Build It Green and co-founder of USGBC’s Northern California Chapter.

“Green business has shifted from a movement to a market. But there is much, much more to do,” says “State of Green Business 2008,” a 64-page report that focuses largely on the extent to which green building practices are being adopted. The report, by Joel Makower of Greenbiz.com, begins by highlighting the top green stories of 2007 — from climate commitments becoming more important to the trend toward zero emissions and zero waste.

The heart of the report is the GreenBiz Index, which is used to gauge the state of green business. The index includes 20 indicators — green power use, carbon intensity, employee commuting, and paper use and recycling, for example — and rates each indicator as “swim” (making progress), “tread” (holding their own) or “sink” (losing ground).

According to the study, eight indicators are swimming, including clean technology investments, which soared to more than $48 billion in 2007. Green office space was also an indicator deemed soaring, due in large part to the 500 percent increase in the amount of LEED-certified space between 2005 and 2007.

The report says that 10 of the 20 indicators are treading and two indicators — carbon intensity and e-waste being recycled — were categorized as sinking. Even though carbon intensity has declined the past few years, the report argues that it hasn’t declined enough and total carbon emissions are not on pace for the 80 percent decrease in total carbon emissions many scientists have said is needed by 2050 to stave off dramatic climate change.

To read in-depth analyses of each indicator, download the report for free. 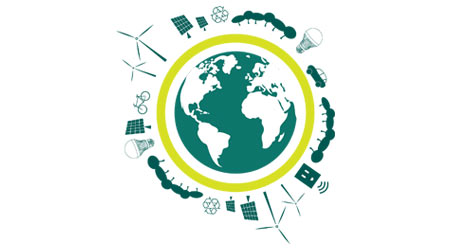