For Envelope, Target Durability, As Well As Energy


By Michael Waite and Sean O'Brien
Green
OTHER PARTS OF THIS ARTICLEPt. 1: This PagePt. 2: LEED Pilot Credits Target Certified Products, Demand ResponsePt. 3: Healthy And Green With LEED For Healthcare

Many cities and states have recognized the huge opportunity for energy savings in existing buildings, and have begun initiatives specifically targeting existing buildings. Though more slow to develop, approaches such as removing energy code exceptions for existing buildings or loopholes based on construction costs have made their way to the state level. And despite the lack of a comprehensive national energy policy, the federal government has targeted energy use in its own existing buildings.

These energy efficiency efforts have tended to focus on improving the efficiency of energy-using building components, such as HVAC equipment and lighting systems, whereas the dominant factor in thermal loads for most buildings — building enclosure performance — is often neglected. Building enclosure upgrades, which often require months of planning and construction as well as a higher level of disruption to building occupants and operations, can seem expensive and daunting. Nevertheless, building enclosures should be considered as they can provide significant energy savings.

The primary challenge to building enclosure upgrades is that modifications targeting energy performance often change the environment to which the existing components are exposed. The building enclosure, rather than providing an absolute barrier between the exterior elements and the interior environment, typically acts more as a buffer. It allows some air in and out, some solar gains and daylight through openings, and some amount of water vapor to migrate through all constructions. Modifying building enclosure systems can produce unintended effects and lead to an unfavorable balance between energy efficiency and durability. Thoughtful modifications, however, can produce long-lasting benefits.

A building is fundamentally a shelter, and the roof is primarily responsible for performing this function. Recently, the idea of using cool roofs to limit solar heat gains has gained prominence. However, the roof also has to keep water out and achieve an acceptable lifespan.

There are significant energy savings possible from bringing an uninsulated roof up to a level consistent with the ASHRAE 90.1 energy code. Though there are some challenges to increasing insulation levels above the deck, such as flashing heights and door curbs, it is beneficial from an energy perspective when replacing a roof. Many energy codes no longer exempt roof replacement from compliance.

Insulating below the roof deck to achieve energy savings may cause durability concerns not present in an above-deck insulation project. If vapor-permeable insulation (e.g. fiberglass batts or open-cell spray foam) is installed below the deck in cold climates, moisture from a humid interior environment may migrate to the underside of a cold roof membrane and condense. More significantly, if the insulation layer is not airtight (as with batt insulation), humid interior air may reach the underside of the roof deck and condense. Cool roofs with light-colored membranes may exacerbate these problems and cause them to occur even in warm climates because they absorb considerably less solar energy, and thus remain colder than traditional gray or black roof surfacing.

Much of the existing building stock, particularly in cold climates, has solid uninsulated walls made of brick or other masonry materials. Architectural trends immediately before the advent of building energy codes also produced large numbers of uninsulated solid concrete-walled buildings.

Solid masonry walls perform very differently than modern, lightweight wall systems. Masonry materials are generally more porous than materials used in modern lightweight walls. With high storage capacity for both heat and moisture, thick masonry walls function by absorbing, storing and gradually releasing heat and moisture to both sides of the walls. Despite the buffering effect on heat flow, in many climates the lack of insulation makes these walls inefficient from a building energy use standpoint.

Reflecting the potential for significant energy savings, building owners are more often looking to insulate inboard of exterior walls. The addition of insulation alters the manner in which a solid masonry wall functions by lowering overall temperatures in the masonry, often leading to freezing conditions in parts of the wall that were previously kept relatively warm. The reduction in heat flow also reduces the ability of the wall to dry, leading to higher moisture levels within the masonry. The introduction of a vapor retarder can significantly exacerbate these issues.

Recently, overcladding of masonry walls has gained some traction. Installing insulation on the exterior of solid masonry walls is much less likely to affect the masonry if proper water management is provided. Exterior insulation is often an unacceptable solution to architects and owners as it changes the appearance of the building. However, adding exterior insulation may be acceptable for renovation projects in which the building has no historic significance or appeal. The ongoing movement of architectural design away from the aesthetics of the 1960s may cause further acceptance of overcladding, but it remains a more expensive option than interior insulation and may not be practical in some applications. That said, it typically allows for continuous exterior insulation — generally more thermally efficient than interior insulation interrupted by framing and floor lines — without moving building occupants or otherwise altering interior activities.

Despite the lack of insulation in many existing buildings, considerably more heat can be lost through single pane windows with non-thermally broken metal frames than through solid walls. Further, solar heat gain through the glass, which was not generally a concern before the high interior loads caused by computers and similar office equipment, increases air conditioning requirements for many building types in all but the coldest climates. Despite these thermal inefficiencies, however, keeping historic windows in place is often very important to building owners.

In many cases, the potential for energy savings from a window or glazing-only replacement can outweigh the benefits of more invasive or potentially risky modifications such as adding wall insulation. However, when considering replacement windows, an accurate analysis of the effects on thermal performance is needed.

Standard industry methods for calculating window thermal performance ignore the effects of the window-wall transitions and assume a perfectly insulated frame perimeter. Window replacement schemes are often considered for buildings with solid masonry walls. The masonry can "short circuit" the thermal break in the window, mitigating its effects. Combining this with other effects, such as the increased surface area of modern window frames and the higher conductivity of aluminum compared to steel, the thermal improvement associated with a thermally broken frame may not materialize in practice. That said, replacing single-pane glass with an insulating glass unit with a low-emissivity coating can produce significant reductions in energy use. This may be possible in existing frames or with replacement frames similar in appearance to the original windows.

Michael Waite, P.E., CEM, LEED AP, is a senior staff I at Simpson Gumpertz & Heger Inc. He specializes in the design and evaluation of building enclosures and the interaction between the building enclosure and mechanical system.

For Envelope, Target Durability, As Well As Energy

Healthy And Green With LEED For Healthcare 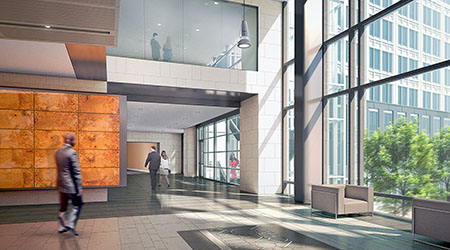