Charettes: Meeting of the Design Minds

With green building and LEED certification becoming more important in new building construction, and an integrated design process essential to a truly sustainable building, one of the biggest challenges is how best to coordinate and communicate needs, questions and decisions throughout the entire design and construction process. This is where design charettes can play an important role.

Charette — the French word for cart — is used by the design services community to describe any intense, on-the-spot design effort that takes place over a short period of time.

There are different types of charettes that can be used for different phases of the design and building process: master planning, architecture, construction and cost estimating, for example.

Charettes are particularly useful when many constituencies are involved in a project because they facilitate communication and collaboration, which are keys to efficient green design and construction.

One of the essential aspects of an effective team for green design is a coordinated focus. The entire team, from owner and occupant to designer, contractor and facilities executive, must understand the impact of the green design effort all the way through. The charette is a key tool for achieving this objective.

The type of charette to be held determines who will attend, but the facility executive, design team, consultants, cost experts, financial and construction personnel are usually involved. The facility executive brings the key decision-makers involved in the project, while the design team includes architects, engineers, planners and any other important personnel.

The most effective charette takes place very early in the design process. The teams involved set the parameters for what kind of decisions can be made. Typically, a charette works at a high level: setting the direction, laying out priorities and making it clear who has decision-making ability when things need to be done quickly.

Having all key personnel together in an open forum, sharing ideas and talking them out produces a creative atmosphere that promotes group brainstorming. This helps develop solutions and solve specific problems in a short time. New concepts are much more effectively introduced in this setting, as everyone is exposed to the same explanations and priorities.

Charettes usually take two to four days. The length of the charette depends on where it is held and the type of project being undertaken. For most private buildings, a three-day session is ideal. This allows for a full day of brainstorming, a day of work and design development by the architects, and a third day to review potential changes and ideas. The key issue with scheduling is to allow time for the group to meet and formulate the problem, time for the design team to create a response, then time for the whole group to reconvene to agree on changes.

There are some obstacles to scheduling a charette, but the benefits will usually outweigh the difficulties. Planning and bringing together all the necessary people can be tricky. Because there are often many people from different organizations, arranging a time and place can be difficult. This is another reason to schedule the charette as early in the process as possible and also speaks to the importance of upfront planning and collaboration.

Cost can be an issue as well, particularly on larger projects. With large architectural, building and consulting teams, travel costs can be significant. If the venue is not already equipped, getting the necessary equipment there, such as computers and models, is another issue. When the charette is not held in the architects’ offices it is important to obtain a large, flexible space.

When a charette is undertaken correctly, the benefits — including improved planning, communication and collaboration — can significantly outweigh the costs. Every project is different, but when the people who make decisions know one another and all have a good understanding of project parameters, decision-making down the road is faster and easier. The project will move more quickly with fewer interruptions when a charette is held to lay the groundwork.

When working on a green building or trying for LEED certification, collaboration is imperative. A charette ensures that key members of the building team make decisions that will enable a facility to be green, decide what materials are to be used at what cost, and ensure the process is being documented. Having the give and take of the charette enables stakeholders to know the costs and what kind of trade-offs might be involved. This enables the entire green building process to work as smoothly and effectively as possible.

The charette process was recently used in the Dallas-Fort Worth areas in two different cases. In one, a new church was being planned and a master planning charette was used to initiate the process. The Gateway Church in Southlake, Texas, with a quickly growing, though relatively new, congregation of 8,000 had outgrown its current building and needed to plan and construct a new facility. The church had virtually no experience with new facilities. The architect organized a charette to plan the church’s needs on a new site that had just been purchased.

This particular charette involved about 40 attendees and took place over two days at the architects’ offices. Those attending included the Church’s development committee, master planning professionals, an acoustical consultant (frequently involved with churches) and the architects.

During the first day, the team members reviewed the church organization, its facility needs and architectural styles. The participants agreed on what they liked and let the architects retreat to work on samples for the evening.

On the second day, the teams reconvened to review what the architects had come up with and work out a course of action. Participants left at the end of the day with an understanding of the master planning process and how to proceed. They had an understanding of the architectural style that would be used. And, perhaps most importantly, the lines of communication had been established for all to use when necessary.

Consider, too, a second charette that was focused on green design. The Hunt Oil Company was planning a new headquarters in downtown Dallas, and wanted the building to be LEED certified.

Because the goals were clearer at the beginning than they were for the church, this project only required a single day charette. All the major personnel attended, including the architects, engineers, and other consultants, as well as the contractors and representatives from Woodbine, the development company representing Hunt Oil. The issues, including costs, schedule and design aesthetics, involved in green design and sustainability were discussed.

By working through all the major points, the parties agreed on what should be included, what cost increases would be considered and who would have the final say on decisions. The charette led to many elements of sustainable design being included in this project. The building is scheduled for completion in October 2007.


Betsy del Monte is a registered professional architect (AIA) and a LEED-accredited professional. She serves as an architectural principal and the national director of communications for The Beck Group, an integrated design and construction firm headquartered in Dallas.

Cambridge, Mass. The Cambridge City Hall Annex, a 33,216-square-foot facility built in 1871, is the oldest building in the world to receive a LEED certification. The renovated structure, which is also the first LEED-certified municipal building in Massachusetts, received a LEED gold certification in September 2005.

The building closed in 2000 after indoor air quality testing found elevated mold spore levels. A challenge for the designers during the $11.76 million renovation was maintaining the building’s historic charm while implementing green strategies that would get the building its LEED certification. The building reopened in 2004 after extensive renovation.

“We combined energy efficiency with adaptive reuse, and, because of the importance of the building, we also used best practices in historic preservation to guide the redesign,” says Bill Hammer of HKT Architects.

The building uses approximately 56 percent less energy than conventionally designed buildings. A roof-mounted 25.5-kw solar photovoltaic (PV) system will provide 10 percent of the building’s electricity. The city received a $337,500 grant from the Massachusetts Technology Collaborative, a development agency, to purchase the PV panels. The designers also used a ground source heat pump system in three geothermal wells — as deep as 1,500 feet — to provide the building’s heating and cooling. An Energy Star roof, low-e double-glazed panes in operable windows, and a displacement ventilation and heat recovery system in public meeting rooms are other energy-efficient measures the designers used.

The designers carefully planned ways to make sure the renovation would maximize daylight. They located work spaces so that more than 90 percent of spaces have outside views. Daylight and occupancy sensors adjust lighting levels, supplement natural light on cloudy days and shut off lights in rooms that are empty.

To help ensure the building’s indoor air quality problems are solved for good, the designers specified all low-emitting materials, including paints, adhesives, carpets and wood products. Carbon dioxide sensors are used to make sure the building’s air is always fresh.

Other LEED credits were achieved by recycling about 85 percent of the construction waste, using recycled materials — including steel framing, carpet and ceilings — and using wood certified by the Forest Stewardship Council.

Boston Artists for Humanity let its mission as a nonprofit arts education organization guide the design of its new 23,500-square-foot facility, called EpiCenter.

James Batchelor, president of the architecture firm Arrowstreet, invited the high school students that would use the building to participate in a series of workshops during the project’s programming and design stages. In addition, students were given a chance to design and install some of the railings and interior partitions used in the building.

For that effort, EpiCenter earned a platinum LEED rating, only the 11th such designation handed out.

The multiuse arts education facility, which includes offices, art studios and gallery space, is a steel-and-glass building that was destined to be a highly sustainable building from the earliest stages of the project. The building’s roof is pitched to optimize the collection of solar energy through a 49-kilowatt, grid-connected photovoltaic array, the largest in Boston.

Glazing on the facility’s north and south facades, as well as unobstructed interior spaces, maximize daylighting. Dimming and automated controls limit lighting loads. In addition, operable high-performance windows reduce heating and cooling loads, so much so that the building has no air-conditioning system. The mechanical system makes use of a heat recovery system.

Those involved with the project view the facility as an extension of Artists for Humanity’s programming. Founded in 1991, the organization employs high school students to create paintings, photos and other visual artwork that is sold to commercial consumers and to the general public. Work from the students has been on display at Fleet Bank, Boston Public Library and the Nielson Gallery.

The organization seeks to bridge economic, racial and social divisions by giving urban youth to chance to achieve self-sufficiency through paid employment in the arts.

The owner-occupied facility is typically occupied by 25 people who work 40-hour weeks and is frequented weekly by 100 visitors who spend an average of 10 hours each in the facility. 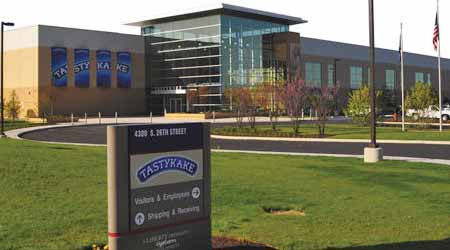 USGBC Perspective: A Look at the Green Industrial Sector 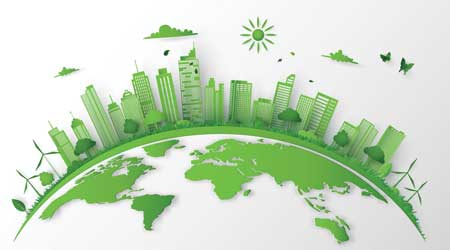