The Alachua County Family and Civil Courthouse is a 101,000SF facility which was constructed in 1978. This facility houses 9 judges, magistrates, attorneys, hearing officers and a host of administrative and support staff to carry out the day to day operations of the Alachua County Eight Judicial Circuit for Florida as well as all functions for the Clerk of the Circuit Courts.

The Problem: Major air flow, distribution and air quality issues and out dated and very inefficient equipment.  We had equipment that had exceeded its life expectancy. There were still fifteen of the original AHUs in this facility.  The existing chiller and cooling towers were installed in 1996. But due to limited funding several critical HVAC components were not replaced. These components were old, inefficient and in dire need of replacement.

The building was originally designed for the majority of the floor space to be open space with modular partitions, which were approximately 4-5ft in height.  With the exception of the judge’s suites and the court rooms all other spaces were essentially open.

As the civil and family court operations and the Clerk of the Courts operations expanded and the need to offer additional services was relevant.  There had been countless additions and modifications to the original floor plan, which added full partition walls throughout the facility. This is when our problems began. Though there were attempts during the design phases of several of the renovations to correct the air flow deficiencies.  After the installation of full partition walls throughout the building, air and heat flow was restricted immensely and caused many areas within the building to have extreme cold spots and air quality issues.  Facilities continued to receive cold and air quality complaints from the occupants.

This occurred due to the original HVAC system was designed to meet the demands for open spaces by supplying limited reheat  to and through the magnetic light fixtures and the  perimeter of the building only.  The magnetic ballasted fixtures were later replaced with electronic ballast linear slot diffusers, offering no heat load to these areas and failed to properly supply adequate air flow.  For years there has been countless heating and cooling complaints from occupants in the courthouse.  Year round the building occupants would augment poor heating and air flow with high energy consuming space heaters.  Upon a thorough investigation by Facilities’ staff and a hired consultant, it was determined that major components of the HVAC system needed to be replaced and controls upgraded to improve the air circulation and distribution throughout the facility.

In 2011, Facilities included this project in the County FY 2012-2017 CIP Program.   While facing a declining budget the BOCC and Courts allocated funds for the project.  However we still did not have adequate funding to replace the chillers, cooling towers and the main two AHUs that service the building.

Particular Course of Action:  After the schematic design phase, it was determined that we didn't have adequate funding to replace the chiller plant or the two main AHUs. This course of action was simply due to budget constraints. However we were confident that we would be able to achieve the goal of air quality and distribution deficiencies as well as replacement of old and inefficient equipment.  (See attached Project Scope).  This project was started in April of 2013 and completed in May 2014.

How We Overcame and Achieved Success: 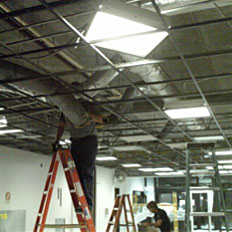 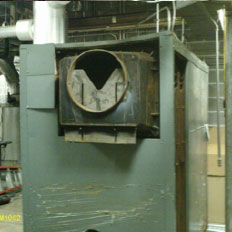 Old boiler being disconnected and ready to remove 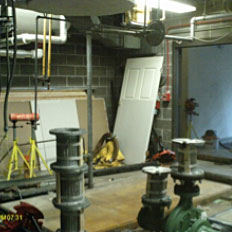 Old boiler removed and the location for new boiler 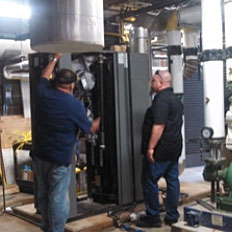 New Boiler installed and being prepped to go online. Online 11/4/13 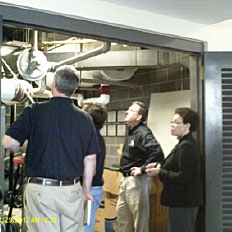 Discussion with the Engineers about boiler connection issues 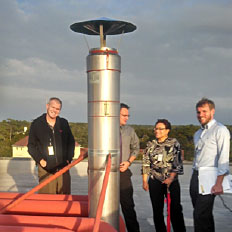 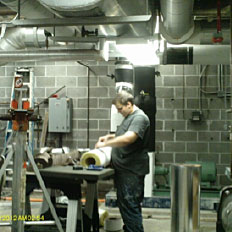 Pipe insulation being prepared to install