It's impossible to predict all the ways that an emergency might proceed, but if occupants have practiced their roles and considered potential contingencies ahead of time they're more likely to act rationally and effectively. Training and robust emergency communications can help ensure your facility's fire safety plans work.

A first step is knowing the fire emergency plan. "Part of new employees' HR orientation should include information on this," says Robert Solomon, building fire protection and life safety division manager with the National Fire Protection Association (NFPA). When new employees move into their workstations, they should take a few minutes to identify the nearest primary and secondary exits, as well as the rally point at which to meet outside, if they need to evacuate the building. At NFPA's headquarters, signs in the parking lot indicate the areas where each department is to gather in an emergency.

Solomon notes that it's easy for people to assume that their safety depends on the building structure itself — whether it's up to code and contains proper emergency equipment in good working order. While these attributes are critical, they're not enough. "Even with all the code compliant features, there's still a role for personal responsibility," Solomon says.

That can be especially true in buildings that regularly see large numbers of visitors, as many will rely on the building staff or other workers to help them figure out what to do, Jelenewicz says. He points to an NFPA study of the 1977 fire that occurred in the Beverly Hills Supper Club in Southgate, Ky., which shows that the staff played a key role in helping some visitors safely evacuate. Interviews with the survivors found that "staff consistently took actions to assist patrons, whereas patrons followed or took a more passive role," the report states.

For people to act as responsibly and rationally as possible in an emergency, they need information, Jelenewicz says. "What's the problem? What am I supposed to do? How do I do it?" Communication systems that can provide this information in a clear, intelligible manner help protect occupants, especially when many are visitors.

When a fire alarm goes off, it's rare that everyone responds immediately, Jelenewicz says. Visitors may not know it's an alarm or what it means, or even hear it. Even long-time tenants may decide to wait for more detailed instructions before leaving. That's where emergency communication systems can come in.

The better the information occupants are provided, typically the better they'll make decisions in providing for their own protection, Harper says.

Most emergency communication systems are installed in buildings that are at least seven stories high, Solomon says. In many high-rises, rather than evacuate the entire building during an emergency, it often makes sense to evacuate the floor on which the emergency is occurring, as well as the floors above and below it. The other floors should know that an emergency is underway, but to stay put. An emergency communication system can help convey instructions to occupants on all floors. 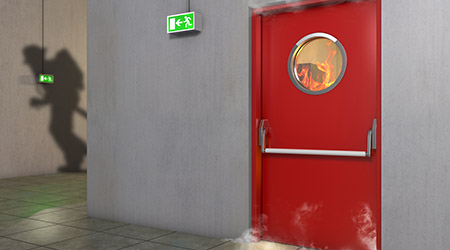