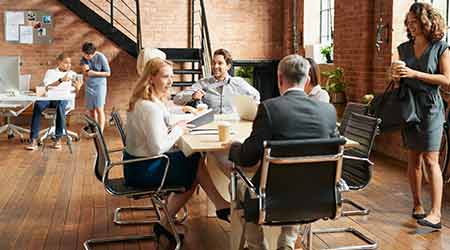 If you’ve had trouble finding new employees lately, you’re not alone — the U.S. labor shortage is reaching critical proportions. And that’s not good news for the economy or for commercial real estate.

Shortages are especially acute in technical fields and the skilled trades, including those that are vital to construction and facility management.

As of March 2018, roughly 6.6 million positions remain open — a record high. U.S. companies have been creating jobs at an impressive rate, averaging 150,000 to 200,000 net new jobs per month in recent years. And labor force growth is barely keeping pace. The new tax law may increase the pressure too, especially if companies use their tax savings to expand their operations and hire more workers.

A labor shortage is hard on employers, and it’s not good for commercial real estate, either. A slow-growing labor force means a slow-growing economy, which means less demand for commercial real estate. If employers hire workers with lesser skills than desired, the result is reduced productivity, reduced business growth and a drag on the economy. In short, labor scarcity means higher vacancy rates, lower asking rents and landlord concessions.

Meanwhile, the shortage of skilled trades and craftspeople is having a direct impact on the cost of property. The average hourly wage for construction workers began outpacing average general wage growth several years ago, and rose by 4 percent in 2017 alone. The fierce competition for talent has led to costly delays on many projects.

Where Did All the Labor Go?

Is the labor shortage really that bad? The short answer is yes. The workforce participation of prime-age workers (ages 25 to 54) peaked in January 1999 and has generally been falling ever since. While the participation rate of this group is currently rising, it is still below levels of the last 20 years.

One reason is the decline in the male workforce. Since 1949, male workforce participation has fallen by more than 18 percent. Many lower-skilled men have been displaced by technology, automation, and offshoring and lack the qualifications for the higher-skilled jobs that remain open.

Many women, meanwhile, may have qualifications, but are temporarily out of the workforce because they’re raising children or caring for aging parents. Women hold the majority of bachelor’s degrees in the United States, but that doesn’t mean they’re looking for work. Given the lack of affordable childcare, staying out of the workforce may make the greater economic sense.

Adding to the labor shortage is “credential creep,” in which companies require job applicants to have bachelor’s degrees or more — even when workers without college degrees are already performing in similar positions. Ultimately, credential creep limits opportunities for employers and workers alike.

Another aspect of credential creep is occupational licensing, in which regulatory authorities require workers to acquire a license to work in a particular field. Whether licensing requirements benefit consumers is debatable, but the requirement restricts entry in certain professions — a boon to those already working in the field.

The final factor? Geography. Jobs are growing mostly in the major cities, while unemployed people are more likely to be found in rural areas or smaller cities in decline.

Policymakers, employers, and workers alike can consider their options for realigning jobs with workers. More options and financial support for technical and vocational training in community colleges and trade schools could go a long way toward addressing skilled trades shortages and reskilling displaced workers.

In the pink- and white-collar professions, employers shaping the future of work could adopt policies and workplace strategies that make it easier for women to remain in the workforce while caring for their families or aging parents. Paid maternity and paternity leave, closing the gender wage gap, and more flexible schedules are among the policies that can help attract and retain talent. Convenient and affordable childcare would help, too, although bringing it to reality would likely require public and private initiatives.

Finally, it’s safe to say we need public policies that help people move from areas with few job opportunities to those with growing economies. Public or private subsidizes for cross-country interviews, moves and, most critically, housing could incentivize workers to leave communities that offer few prospects.

Companies and local governments could pursue these potential remedies to address critical labor shortages. Doing so would benefit employers and workers alike, along with the larger economy as a whole — and that would be good for commercial real estate too.

By Ryan Severino is chief economist for JLL.