Des Moines Public Schools has more than $300 million in unfunded work, so Bill Good is working diligently to petition lawmakers to allocate funds, while remaining creative with existing money.

One item Bill Good wants solved is funding. Good and his team have identified $300 million in needed building renovations, and the district doesn’t have that money. The state legislature is funding education at a rate that Good says is not sustainable: 1 percent annually, although it was 2 percent last year. However, costs increase more than that each year, so the rate needs to be at least 3 percent annually, Good says.

“I’m hopeful that the state will fund us better,” he says. “We can’t be sustainable and do the things we’ve been doing. We can’t have as many buildings or small class size because of inadequate funding.” 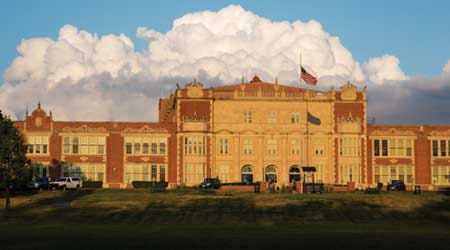 The district is looking to reduce building inventory. In October, it put its former administration building up for sale and is moving operations to five different sites to better optimize existing square footage. Doing so will reduce operating costs and the proceeds will help offset the $74 million budget deficit the district will have in the next two years, Good says.

With $300 million in unfunded work, Good tells school administrators to prioritize their needs. Prioritizing is one of the lessons Good learned early in his career.

“I’ve learned how to be creative in an environment where there will always be funding restrictions, how to put students first,” Good says. “I’m an ornery son of a gun, but I don’t try to apologize for that because sometimes you have to be. Sometimes you have to have spirited discussions with contractors for whom students aren’t their first priority, so I’ve had to bring people back to what’s most important. Students are at the head of the line and not the back end.”

Principals Derrick and Panek say they’re grateful for the passion that Good brings to his job every day, and they appreciate his understanding of how what happens outside the classroom affects what happens inside it.

“Sometimes you get people from outside of a school building and they think that operations are separate from learning, but they’re not,” Panek says.

Good, who thought he’d retire when he was done in Davenport, says the fact that he’s directly involved in making opportunities for students is what drives him. The adults, however, are another story.

“I’ve told people close to me that what will drive me away is when the adults finally get to me because the students aren’t doing that,” Good says. “They’re the ones keeping me here.”