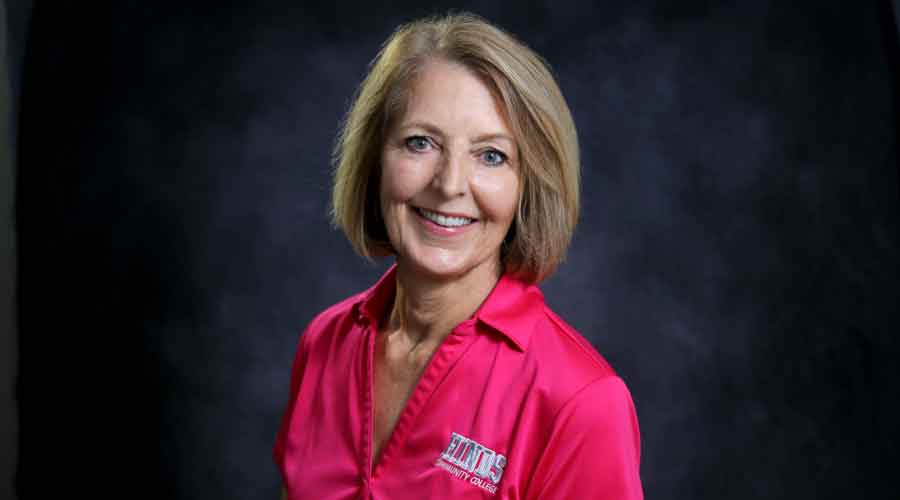 Then there’s Mindy Stevens, Sustainability Director for Hinds Community College in Mississippi. Her story might eclipse all of them.

Stevens was a bookstore manager for Hinds, which has six campuses hosting 13,000 students in Central Mississippi. But when the college created the Department of Energy Conservation and Sustainability and was looking for internal candidates to lead it, Stevens applied and earned one of the two leadership positions.

“I’ve always been a recycler,” says Stevens. “I’ve always been someone that thought energy consumption is important, and the job seemed to fit me. It sounded like something I would be interested in.”

Fourteen years later, Stevens and Hinds have proven to be a perfect match. The combination has resulted in a win for energy savings.

As the bookstore manager overseeing operations at all six Hinds campuses, Stevens saw examples of energy waste all over – lights staying on in unoccupied areas and desktop computers remaining powered up when nobody was using them. Small things can add up to big energy costs, and observing all the wasted energy was disturbing.

“It was the wastefulness,” Stevens says. “We’re funded by the state of Mississippi, so it’s all the taxpayers’ money – my money. It was an eye opener on how we were running things, from 6 in the morning until 10 at night, and a lot of times no one was even in the rooms.”

It was 2008 when Hinds President Dr. Clyde Muse decided he had enough of the energy waste, which was not only an environmental issue but was also becoming an economic concern.

“The biggest budget at the university is the salaries, and then next comes the utilities,” Stevens says. “We don’t want to cut salaries or people, so we’ve got to cut the utilities.”

When the college started taking applications for the newly created positions, another college leader knew Stevens was the perfect candidate to fill one of them, even though her resume may not have matched the job requirements. 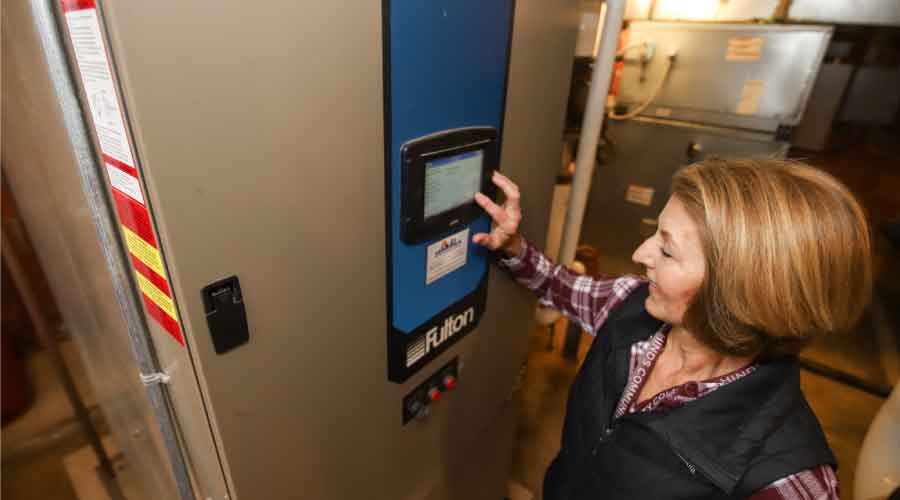 “I knew from having observed Mindy in other capacities at Hinds that she would be the best candidate for this new position,” says Thomas Wasson, then vice-president of Physical Plant and Auxiliary Services. “Despite her dedication to her new task, she had a tough job ahead of her because recycling and conserving energy were not on the minds of the majority of those with whom she was charged with educating.”

Stevens and Jason Pope took over as energy managers in the Energy Conservation Department in 2008 and immediately got to work. They were responsible for more than 200 structures across the six campuses and started to achieve real savings.

The new program was an immediate success. When Stevens and Pope took over, they had a goal to eventually reduce the college’s energy consumption by 20 percent – a feat they accomplished within 12 months thanks in part to a $5 million investment in new systems. Adding the ensuing years, the energy savings have climbed to 33 percent.

The savings also included reducing water use and demonstrated Stevens’ dedication to her job. After seeing an abnormally high water bill, she walked the entire campus and listened to every storm drain until she heard running water. Maintenance then went out to the site to correct the leak.

“This equates to a savings of over $20 million for the college,” says Pope, who recently started working for the state of Mississippi as director of Energy and Natural Resources. “We had a department of two and worked together on a daily basis to create an energy conservation policy and move the plan forward across our institution. She was a key player in sharing the information and making sure our employees followed the new policy. This was not an easy process due to the culture shift that it entailed.”

In 2015, the Energy Conservation Department evolved into the Office of Sustainability, a department that Stevens currently leads as its director. The sustainability office started overseeing environmental programs such as energy conservation, recycling, waste management and other green initiatives.

Nobody associated with the position knew it would be easy to reverse the momentum and getting the campus to think sustainably.

“Changing the mindset of all the employees to be conscious of energy savings, that takes a skill. It’s not like buying a new piece of equipment,” Muse says. “That’s getting people to do it. That, to me, was one of the greatest aspects of this energy conservation, which she and Jason were able to get done for us.”

One of the first steps to success was to get employees and students on board. One example of Stevens’ leadership happened when an honors program oversaw a campus recycling program but was short on resources and time to keep the program active.

Instead of letting the program fail, Stevens worked to find a way for it to succeed.

“Mindy immediately took the recycling program over and started growing the program across Central Mississippi,” Pope says. “At times, the recycling center processes over 100,000 pounds of material a month. She operates the only in-house recycling facility at a community college in Mississippi. They literally sort materials, compact and bale materials, and ship materials to local mills throughout the state.”

Stevens describes one aspect of the recycling program further, saying “we recycle cardboard and we collect it from the cafeteria and from the organizations around the area and from all of our campuses.”

She also took advantage of the school’s trucking education program to transport the cardboard to recycling facilities across Mississippi, saving the college thousands in labor and transportation costs. The money generated from the recycling program provided scholarships for prisoners who worked as part of the program.

“We put the bales on an 18-wheel truck trailer and we have students go through the truck driving school, and those students drive to Meridian, Mississippi, with the load of cardboard,” Stevens says. “They get experience on how to drive with a full load and how to weigh things. From (the recycling center), the goods are taken to a roofing company where it’s incorporated into tar paper that’s on roofs before you put shingles on. It’s processed here in Mississippi and people from Mississippi get to use that product.”

Other solutions, Stevens has realized, aren’t as complex as that recycling program. Dating back to her days in the bookstores, Stevens saw lights and computers constantly being left on when people were leaving rooms empty. To achieve the maximum savings, Stevens needed to reach out to students and faculty and get the message across.

“We’ve gotten everybody on board, and part of that is trying to get the mindset of when you walk out of the room, you turn the light out. You turn your computers off,” she says. “Computer lamps were left on all the time. They were never shut down so now we added signs that say there are three computers on, use more if we need more and we can turn more on. It’s that type of mentality you have to try and foster. There was pushback at first – we can’t turn anything off and it’ll mess everything up. But computers run differently now than they used to.”

Wasson says it was Stevens’ personal touch that put the finishing touches – or perhaps a Hershey’s Kiss – on the program.

“Mindy left a chocolate treat on the desks of those who complied with her computer shut down mandate,” Wasson says. “It didn’t take long for departments to begin discussing who got treats and who didn’t. Slowly but surely, faculty and staff began shutting down their computers every night.”

Thanks to the savings achieved, the college was able to give two pay raises to staff.

As climate change and facility managers do what they can to help adapt their buildings to become more resilient, smarter and energy efficient, the sustainability world continues to grow and evolve.

Stevens and her staff are currently in the process of modernizing equipment by designing HVAC systems. The sustainability team is working with Hinds’ physical plant staff to provide more flexibility and scheduling options for system run times. Thanks to federal funding provided by COVID-19 relief, Hinds is replacing the older HVAC systems with more modern and efficient systems, hoping to achieve a goal of 50 percent savings.

Two more programs near and dear to Stevens’ heart are a new composting program, and the adoption of reusable takeout containers for the dining halls. The college planned on replacing Styrofoam shells for takeout before the pandemic set in, but those plans were delayed. Hinds plans to start that program in Fall 2023, but they are already full-steam ahead on the composting plan.

“We’re doing about 100 pounds a week of organic material that we’re putting on our compost pile,” Stevens says.

Muse retired from Hinds a few years ago, but still keeps an office at the college and sees first-hand Stevens’ efforts in action. Students are growing increasingly more aware of recycling and sustainability efforts, and staff and faculty are embracing it knowing their work atmosphere will be a better place. Fourteen years after changing the campus for the better with the hiring of Stevens and Pope, Muse’s gamble on hiring Stevens has paid off. The proof is in the energy savings.

“When we say we saved something like $20 million, for a small college like we are, that’s a tremendous success,” he says. “We decided to give her a chance, and she’s done gangbusters.”