In health care, evidence-based design is usually associated with new construction. But the approach is inherently well-suited to facility operations. "It's probably a better fit for existing buildings," says Marcel Harmon, built environment analyst with ME Group. "You have the lab right there."

The problem is that people don't think of buildings as an experiment, Harmon says. They don't consider that there may be adjusting or adapting that can be done.

But, as any facility executive can attest, there's plenty to tweak. In a building, 80 to 90 percent of the complaints stem from indoor environmental issues, says Steve Orfield, principal with Orfield Labs. The indoor environment encompasses everything from air quality to the amount of glare coming from a task light.

In 2002, the U.S. General Services Administration (GSA) launched an extensive effort in applying evidence-based practices in its operations with the WorkPlace 20-20 research and development pilot. The pilot projects had the goals of improving collaboration and communication, space use and efficiency, environmental quality, and employee engagement and well-being.

One significant result GSA found was a decrease in stress by improving workplace conditions. In a study of the GSA PBS Regional Headquarters in Denver, Colo., a research team monitored occupants for physiological evidence of stress, independent of self-reported perceived stress, and found the new workspace caused less stress. Lighting, ventilation, air quality, and access to daylight and views had been improved.

In a larger study covering several GSA projects, 49 percent of respondents said the new workplace was better for their stress levels and 55 percent ranked the new space as better for individual productivity.

Evidence-based design is not rocket science, but it is science. And at its heart is human outcomes. Unfortunately, humans are notoriously unreliable.

People can know that they're uncomfortable, but they're not necessarily aware of why, says Orfield. To overcome the unreliable nature of opinions, Orfield tries to measure pre-verbal information. Rather than ask occupants what they like, Orfield runs "perceptual juries," showing people images of their building and other similar buildings, studying what they seem to find good or bad about them.

This might start to seem costly, but Orfield recommends spending 1 to 2 percent of the cost of the project to do research. "You'll save at least as much," he says. The idea is that if you treat people better and give them more, you'll probably get more out of them. "There's nothing you can save as much money on as treating people well," Orfield says.

Evidence-based thinking in operations entails first doing research on what the performance attributes of the facility should be — from thermal comfort to light levels to furniture layout — and then working to find solutions that will meet those metrics.

"In terms of evidence-based design, if you don't know what your goal is, then you'll never get there," says Patricia Cheng, program analyst, Applied Research, GSA.

Over time, GSA has come up with a toolkit to use to improve workplace quality. In order to remain sensitive to the individuality of each facility, it's not a checklist, Cheng says, but rather a collection of available strategies. These include time/space utilization surveys and occupancy surveys covering indoor environmental quality, productivity and workplace image, among other issues. They also do post-occupancy studies to review how effective the project was.

Developing the toolkit was a long process, Cheng says. GSA started in 2002 by bringing in several noted consultants and brainstorming on best practices, which were then modified to the needs of government clients. Over the years, these have been adjusted.

At Orfield Labs, when they look at buildings, they ask two things: What are the building performance values and what do people think about being there? They survey organizational quality, work task quality, compensation quality and the environment quality of the facility down to the individual workspace.

"Know what's wrong," Orfield says. "If they don't like the organization or their pay, the best building in the world won't fix that."

Orfield points out that often when professionals think about evidence-based design, they read a study and simply transplant whatever was done into their facility. But facility executives will have to gather data, do research and test out strategies in order to employ evidence-based thinking in operations.

One way to make the process of testing out solutions more manageable is to set up a few test areas, says Harmon. That way if it doesn't work, you've only spent a small amount of money and effort, rather than rolling out the concept enterprise-wide. Statistically, the larger the sample size, the more representative the results will be, but that doesn't mean that a small experiment is bad.

Perhaps more importantly, evidence-based operations will encourage facility executives try novel approaches and really push the performance of their facilities. By testing out new concepts first and studying how they work (or don't) in a particular facility, facility executives can gain the confidence to embrace innovation, rather than sticking to the same-old operations just because they're known. "Doing research protects your ability to take interesting risks," Orfield says. 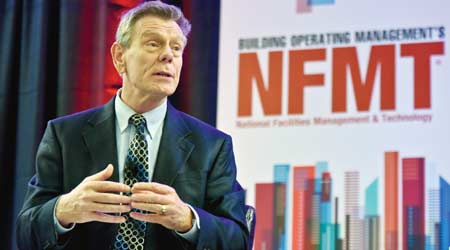