Facility managers have recognized that the facilities they own and operate have an impact not only on their occupants’ environment but also on the environment in which we all live. It is this recognition that has given rise to green buildings. Designers, owners, and facility managers strive to reduce the environmental impact of their buildings by applying more resource-efficient construction, renovation, operation, maintenance and demolition practices.

Perhaps the most often considered environmental impact of windows is how they can contribute to reducing a building’s energy use. Windows have long been recognized as a major source of energy inefficiency within buildings. During the heating season, poor windows are a major source of heat loss. During the cooling season, not only do they allow heat to be conducted into the building but they also permit solar radiation to enter, further heating interior spaces. Year-round, they allow air to infiltrate between the frames and the glazings, and between the frames and the building walls. And as windows get older, their performance deteriorates.

Careful selection of replacement windows can result in major reductions in energy use and environmental impact. For example, facility managers can select glazing that can limit the amount of light that passes through, either in total or by selected wavelengths. By limiting the amount and type of light that enters a facility, the cost of air conditioning can be reduced while occupants’ comfort in spaces with large areas of glass can be improved.

Tinting can be added to the glazing material to reduce the total solar radiation transmitted by the window by between 10 and 90 percent. Tinting is best used in applications with large glass areas that result in large cooling loads in a building’s perimeter. There are two potential drawbacks to tinting: It reduces the total amount of light passing through the window, including visible light as well as infrared radiation, and it changes the appearance of the building.

An alternative to tinting is low-emissivity or low-e coatings. These coatings act as a selective filter, allowing visible light to pass through the window while blocking long-wave infrared radiation. Unlike tinted windows, units with low-e coatings are almost identical in appearance to conventional windows. They offer the additional advantage of blocking between 60 and 80 percent of the ultraviolet light that strikes the windows.

The window frame can also have a significant impact on the energy efficiency of the window. Common materials used in window frame construction include wood, metal and vinyl. All three are available in a number of variations including natural, painted, or baked enamel finish, or aluminum or vinyl clad. All can be recycled at the end of their service lives.

Of the three materials, wood offers the lowest thermal conductivity. Wood has good thermal stability and can be easily milled to a wide range of patterns. Its biggest drawback is its susceptibility to damage from moisture. To protect against moisture, units are available with painted finishes or with aluminum or vinyl cladding.

Metal frame windows have a much higher thermal conductivity than wood ones. To reduce heat loss or gain through the frame, a thermal break is placed between the interior and exterior portions of the frame. Typical protective finishes include paint and anodized coatings. Metal frames offer the advantage of high strength, particularly in applications with high structural or wind loads.

Vinyl window frames, long used in the residential market, had been resisted until recently in the commercial and institutional market. Advances in frame designs and durability have finally led to wider acceptance. Vinyl frames offer the advantages of low maintenance and high resistance to moisture penetration.

Although facility managers are aware that replacement windows can improve a building’s energy efficiency, some facility managers may not realize that components from old windows can be recycled. For example, a portion of the glass that is used in making new windows is recycled. The most common practice used in manufacturing window glass is the float process. In the float process, the raw ingredients used to make the glass are mixed together and melted. As part of the process, recycled glass is added to the mix. For most manufacturers, at least 30 percent of their glazing is recycled glass.

Continue Reading: What Makes For A Green Window?

The Cost of Poor Window Maintenance 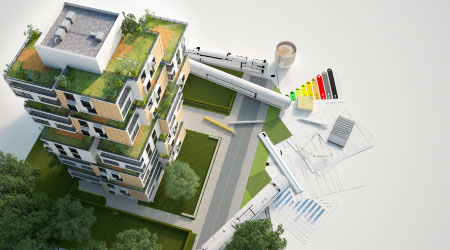