Use your BAS and IoT devices to create a pseudo-demand-response program in your building. The savings can be substantial. Here's how.
By Greg Zimmerman, Executive Editor   Energy Efficiency
OTHER PARTS OF THIS ARTICLEPt. 1: This PagePt. 2: How to Take Specific Steps to Slash Energy Costs

Call it load shedding, emergency curtailment, or just good old fashioned demand-response — whatever the term, in the past, it would work like this: A utility realizes it’s nearing its generation capacity, so it puts out a call (or an email) to its big customers who have signed up for demand-response. Those customers turn things off, raise setpoints, and perform other operations to cut electricity use. And in return they get an incentive on their bill.

Because BAS, Building Internet of Things (IoT), and controls technologies have improved, demand-response events have the capability to be automated. That is, when the utility needs to shed load, you can simply program your system to perform the demand-response actions automatically. (In some cases, though this is more common in residential applications, the utility can actually control a web-enabled thermostat, and reduce the setpoint on its own during a demand-response event, in exchange for a nice incentive for the customer.)

According to the 2017 Utility Demand Response Market Snapshot  published by the Smart Electric Power Alliance, of 13,629 enrolled megawatts of demand response programs, about 13 percent (1,050 MW) is fully automated. So there’s much work to be done.

Another potential disincentive to demand-response is that utilities don’t always renew those programs from year to year. “It’s more likely moving into the future that utilities will see more economic benefit from charging real-time energy prices,” says Rob Knight, senior associate and controls engineer with Environmental Systems Design. “They’d raise the cost when demand increases and they’ll allow customers who are so equipped to save that money.”

But those limitations of some demand-response programs don’t mean that the idea of cutting load, especially at times of high demand, isn’t a good one. “You’re not going to get a lot of payback from an occasional demand-response event, but you will get payback from lowering your total kilowatt-hours,” Knight says.

So what if you could do a pseudo-demand-response event in your facilities, based on when real-time prices are high or when demand peaks? Are there potential energy cost savings benefits without impacting occupant satisfaction? This strategy is happening more and more these days, especially with the capabilities brought about by Building IoT technology and smart grid’s ability to allow for real-time pricing. But you need to establish a few technological and operational baselines before embarking on such an initiative.

To be most effective in slashing energy costs, a few technologies need to be in place. “The big one is a smart meter you have access to,” says Joseph Aamidor, senior product management consultant and managing director, Aamidor Consulting. “You need to be able to connect directly to your smart meter to get data in real time.” Whether or not your utility has real-time pricing capability, simply knowing your peak demand for the month can be the first step to lowering it. 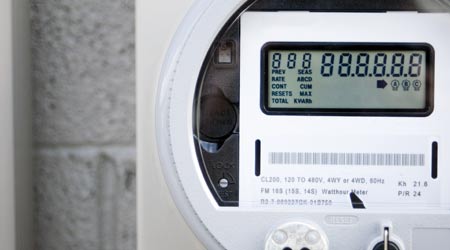 (A smart meter plus the ability to act upon real-time energy pricing equals a massively impactful way to slash energy costs.)

“The goal is to take small dips out of the peak,” says Knight. Doing so reduces the total number of kilowatt-hours, of course, but also lowering your demand charge can have a significant effect on your utility bill. “If you’re doing load shedding, you need to know what your peak for the month is, and reduce that,” says Aamidor. “If you’re over your peak, you’ve set a new peak. And the whole goal is to stay away from that.”

A BAS or Building IoT network that can provide a sophisticated degree of intelligence, analytics, and management must also be in place. Building IoT has the advantage of being able to “spread the pain least impactfully,” says Knight. That’s because IoT allows for “better granular measurement, so you can really drill into the relationship between HVAC and energy and what’s happening with cost,” he says.

Beyond the brain, though, a system should include “end devices that are capable of operating at part load, instead of simple on/off,” says Knight. This means variable frequency drives and dimmable networked lighting and controls, as two examples.

How Special Rates, Deregulation Can Save FMs On Utilities Costs