Part 1 of a 2-part article offering tips and advice for how to apply for and receive rebates for energy efficiency upgrades from utilities.

By David Lewellen
Energy Efficiency
OTHER PARTS OF THIS ARTICLEPt. 1: This PagePt. 2: How To Cut Risk In Getting Utility Rebates

Everyone wants to cut their energy bills, but for facility managers it often takes money to save money. Facility managers who propose energy upgrades need to be able to make the case for an efficient investment, and often those investments will look more alluring if the utility company is offering a rebate or incentive to make the improvement.

The process of getting a rebate can be complex, however. That is why, industry experts agree, facility managers applying for rebates or incentives need to do their homework thoroughly.

“The minute you think you might do something that might get a rebate, put in the application,” says Lindsay Audin, president of Energy Wiz. The utility’s pool of money could run out, but the application establishes your place in line, and there is no penalty for withdrawing it.

Richard Lubinski, president of Think Energy Management, says that some utilities’ rebate programs open for applications on Jan. 1 and have committed all their money for the year by March 1, so he advises facility managers, metaphorically at least, to “be there with paperwork in hand by 8 a.m.”

Even if a facility manager has not filed for a rebate early, it’s always worth checking to see if a utility rebate is available. For one thing, a utility may have extra rebate money to get rid of by the end of the year, says Doug Bloom, CEO of RealWinWin. He says that’s at least as common a scenario as a utility running out of money in the rebate pool.

Follow the Rules
One reason to file early is to find out what requirements must be met to qualify for a rebate. For example, some utilities require onsite inspections before or after a project begins, and sometimes both, Lubinski says. “If you don’t get pre-approval, your likelihood of getting a rebate is somewhere between 25 percent and never,” he says.

Lubinski’s advice — “Always, always get pre-approval,” plus “Have a good understanding of the program, and make sure your paperwork is 100 percent correct” — amounts to best practices for facility managers.
But a facility manager who violates either rule may luck out and still be able to land a rebate. A great deal depends on individual utilities and programs. In fact, sometimes it’s possible to put in an improvement and file for the rebate afterward, Bloom says.

Wayne Robertson, an engineer with Energy Ace, has generally found that “utility companies err on the side of leniency.” He remembers a case in which a facility did not have all of the paperwork to document its spending on a major efficiency upgrade, but the utility still granted the rebate. 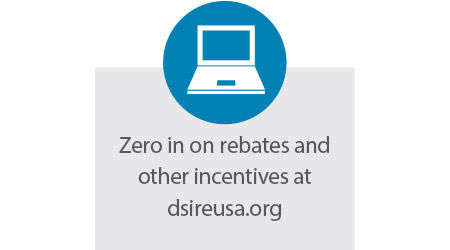 Still, late filing or incomplete paperwork can cost a facility manager a chance at a rebate. And that, in turn, could doom a proposed energy efficiency project. A rebate can be a big boost for a project that lands on the margins of what the organization will typically accept for paybacks. Most commercial real estate has a horizon of no more than three years; schools or governments, which expect to own their property much longer, often have longer payback windows, but even they may expect payoff within five years.

Using a rebate to justify a project is another reason to make rebate homework the first step when applying within the company for funds to do a project. But facility managers can’t just assume that they’ll get a rebate and then factor that amount into the financial justification for the project.

“Don’t count your rebate until it’s hatched,” Audin cautions, meaning that the facility manager shouldn’t factor the rebate into the project justification numbers until the utility says in writing that the money has been reserved. Until the utility has given its OK, it’s important to indicate in the internal project proposal that rebate money is a possibility but not a certainty, or to say that any rebate would be a bonus for doing the improvement. However, Audin says, “You could put the application in (to the utility) two months before the presentation (within the company). I’ve done that more times than I can count, and it works every time.”

Even if a project pays for itself quickly, a rebate can be a nice bonus. Lubinski remembers one case in which a city in New England had money to use up by the end of the year and wound up paying for two-thirds of an improvement that a company would have undertaken anyway.

“You’re definitely going to have people who would make the investment anyway and see a windfall,” says Philip Henderson, a senior financial policy analyst with the Natural Resources Defense Council.