With limited opportunities for energy efficiency in its data center, an insurance company turns to other sustainable measures.


By Douglas B. McCoach
Energy Efficiency

Data centers were once viewed simply as large concrete boxes that housed massive amounts of equipment, most of which consumed vast amounts of energy. Leading companies are changing their outlook.

One such company is Highmark, a health care insurance provider. Its recently completed 87,000-square-foot data center demonstrates that even data centers, as unusual as it seems, can incorporate sustainable design techniques.

The two-story, $27.5 million structure, located on a sloped 11 acre site near Harrisburg, Pa., houses more than 50 employees. It also processes more than 500,000 claims and responds to 33,000 customer inquires per day by using a sophisticated electronic network connected to more than 100 hospitals and 15,000 health care practitioners around the country.

Every step of the project — from site selection through construction — focused on building a facility that would be secure, sustainable and serviceable to ensure continued operations. Built with precast concrete with a roofing system capable of withstanding sustained winds in excess of 110 mph, the facility is equipped with dual electrical power feeds from dual power substations. Backing up the electrical utility is an uninterruptible power supply and twin 2-megawatt diesel generators capable of running the facility for 72 hours if power were lost from both substations. It was also designed with a backup water source to allow for continued water chilling during a disruption of water service.

Incorporating sustainable concepts into the structure enhanced the reliability of the building systems and reduced operating costs. For example, Highmark’s design collects water from the roof and stores up to 100,000 gallons, which is filtered, treated and made available in the event of a shortage.

The water is stored under a concrete apron on the loading dock. Essentially a large plastic egg crate, the storage system provides the structure for the road surface on top.

Treated water from the center’s storage cistern is used in the building cooling system and provides greywater for toilets and an irrigation system.

Other features include enhanced environmental controls within individual work areas, all of which are equipped with temperature controls, lighting controls and carbon dioxide monitors that tie to central controls.

Pursuing a LEED silver rating forced the project to balance the incremental cost of sustainable design elements against one another to develop a program that fell within the project budget. This goal presented a series of trade-offs.

Some criteria to obtain a silver rating were easier to accomplish than others, particularly for this type of facility. For example, construction waste management is relatively inexpensive. Light pollution reduction, which involved reducing the number of exterior lights and aiming them downward, was a simple criterion to meet.

The most expensive measure — the rain water harvesting system — involved the most complex set of solutions; however, it reduced the facility’s use of the city’s water supply, making the structure almost self-reliant for its supplemental cooling needs.

While most data centers are located on flat sites, Highmark’s was located on a hillside. The land was located in an emerging office park, home to the local police dispatch system. In addition, dual substations and power supply meet near this site. As a result, what would normally appear as a major disadvantage offered a number of advantages and opportunities.

The hill itself drove the single-most important aspect of the design — the creation of a two-story structure. This allowed the design team to locate the data center above the space for critical infrastructure components such as chillers and generation. Typically, this would add costs for exit stairs, elevators and steps involved in moving materials to the second floor. But the slope provided access to both floors independently.

The key was to develop a strategy for not only building into the hillside but retaining the grades necessary for the two-story structure.

This design also offered cost savings. Because each floor exits to grade, fire stairs were not needed. Because each level has a loading dock, freight elevators weren’t required.

The site didn’t increase the cost of the structure significantly. The hill forced the footprint of the building to be reduced, resulting in a more economical roof. It forced the design team to retain grade, but generated a solution that requires less exterior cladding, no stairs and no extra requirements for elevators, all of which offered cost savings.

What’s more, the site highlights the structure’s design elements. Indeed, the dynamic appearance is a response to the slope itself.

The hallmark of good data center design is the capability to expand and to house new technology. In Highmark’s case, the ability to expand as requirements increased was critical, as was the scalability. To provide the best design to accommodate expansion, Highmark hired a network design consultant to assess its current and future data center requirements. A growth profile, which identified where expansion would be required, was completed.

Often, data centers become obsolete because needs of an organization outgrow the data center. With Highmark, extra space for expansion was included in the initial plans. For example, the current UPS systems support the entire equipment load today and should be able to do so in the future as well. Rooms have already been built to allow for easy installation of additional UPS systems, emergency generators and other equipment in the future. Space and conduits are already in place.

From a cost standpoint, this allowed Highmark to defer the capital expense of installing expensive equipment infrastructure. The initial cost of building an empty room with some of the distribution network was about $90 per square foot. This is an inexpensive cost compared to the financial requirements of retrofitting the entire facility in the future.

In addition to housing technology, this facility receives visits from community members, auditors and vendors. Consequently, Highmark incorporated a marketing component designed to demonstrate the technology mission of the building and its value to the company.

Specific attention was given to the visitor experience. The entrance is clad with glass and metal in a cantilevered design to portray a technology-driven appearance, yet remain inviting and warm to those approaching the structure.

Visitors are then guided into a tour aisle with a multimedia experience that includes graphic displays and other elements that choreograph the visitor experience. This includes communications devices that connect people on the floor using wireless headsets.

Data centers are not known for their energy efficiency. However, as a building type, they are critical in keeping America’s corporations functioning efficiently and effectively. Paying attention to the principles of good design and sustainability are crucial to changing the perception of how these structures can best fit into the urban landscape.


Douglas B. McCoach, AIA, is a vice president in the Baltimore office of RTKL Associates Inc., an international architectural and engineering firm. 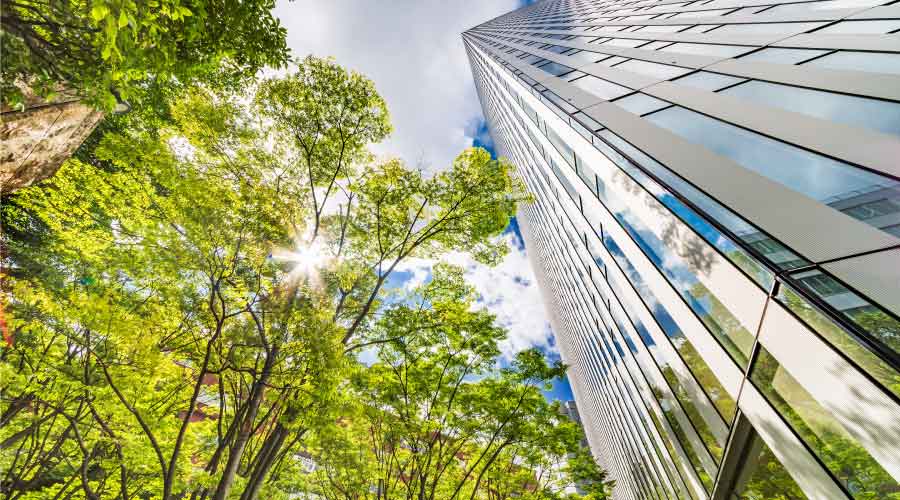