As mandatory energy use benchmarking becomes more common in the United States, cities are using it in a number of different ways. Among them are promoting energy efficiency and designing more effective energy rebate and incentive programs.

Most of the mandated energy benchmarking programs in the U.S. have been in place for just a few years. However, such programs have been up and running for longer periods of time elsewhere, including the European Union and Australia, says Andrew Burr, director of building energy performance policy with the Institute for Market Transformation, a Washington D.C.-based nonprofit promoting energy efficiency, green building and environmental protection.

Several factors are driving interest in mandated energy benchmarking in the U.S. For starters, given the tight budgets within which many cities and states currently are working, energy efficiency can be a means of cutting operating costs in their facilities, Burr says.

Moreover, few cities have any idea how the private buildings in their areas consume energy, Burr adds. That can hinder their ability to craft effective energy rebate or incentive programs. "This information allows the government to develop smarter policies and incentives," he says. 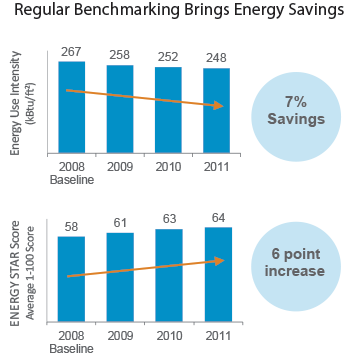 And, while some have expressed concern that making Energy Star scores public might limit the market for buildings with lower scores, energy is just one of many factors a potential buyer, lender or tenant considers when entering into a transaction, says Burr. "We hope that disclosure makes (energy efficiency) more a part of the conversation, but it doesn't supplant location or price." Moreover, building owners can take steps to improve a facility's low Energy Star score.

Of course, benchmarking is a starting point, as Duer-Balkind says. "It's not an audit." The Portfolio Manager score doesn't reveal how a building is using energy inefficiently, or which efficiency investments might be most useful.

Benchmarking does require gathering data on energy use — a process that can be time-consuming under the best of circumstances, and even more so when a building owner has to try to obtain this information from a tenant. To alleviate this challenge, some municipalities have worked with local utility companies to ensure they can provide the owners with the information they need, Burr says. "The goal is not to require a process that building owners have a lot of trouble complying with," he adds.

Automated benchmarking services, offered by some utilities and other firms, supply energy use data to Portfolio Manager automatically, without the need for manual data entry.

As to the charge that evidence of the benefits of energy benchmarking programs is limited, some respond that this simply means the programs are too new to evaluate. It doesn't support the notion that the programs don't work.

One example comes from San Francisco, whose energy benchmarking regulation dates to 2009, when a city task force found that ratepayers were investing about $1 billion annually in energy reduction incentives, says Barry Hooper, green building program coordinator. The goal was to use the information to take better advantage of the programs.

Commercial buildings now report annually their Portfolio Manager score, their energy use intensity, or EUI, which is total BTUs per square foot, per year, and their level of greenhouse gas emissions, Hooper says.

The benchmarking mandate was phased in over several years, starting with the largest buildings. About 65 percent of owners of private buildings have completed the benchmarking, and Hooper and his colleagues are working with the rest to bring them into the program. To that end, the city and the local utility, Pacific Gas and Electric (PG&E) have hosted dozens of training sessions. Once most facilities are in the program, the data collected will be published online.

The reception so far has been largely positive, especially once building owners understand the intent behind the regulation. Industry representatives helped craft the regulation, and facility owners appreciate the fact that Portfolio Manager is available at no cost, Hooper says.

Moreover, the benchmarking already is having a positive impact. The city's own buildings — about 300 in all — have been benchmarking energy use for several years. Analysis of this data revealed that their cumulative energy use declined 1 percent between 2009 and 2011.

How To Capitalize on the Value of Long-Term Energy Planning
Energy Benchmarking: Avoid Costly Fines For Failing To Comply