In the best cases, a facility manager has advance warning that a disaster is about to strike. That warning starts a race against time.

Deciding whether to call in the buses is the first in a series of decisions Moore and his team have to make when faced with a tsunami warning that looks potentially serious. What they do from there could determine whether students, faculty and staff are able to get home quickly or have to stay at the school's evacuation site for a substantial period of time. And, because in the interest of avoiding congestion parents are told not to try to come get their children, that decision could lead to families being separated during a potential time of crisis.

"There's generally a fair amount of pandemonium in the time between the declaration of a tsunami warning and an hour before the expected arrival time when they basically close all the roads," Moore says. "Do we call the buses and risk the students getting stuck in traffic somewhere? Every one of those schools has a physical evacuation site, so if you're at School A on the coast, there's a place where the whole school goes," as opposed to sending kids home on the bus.

Regardless of the type of disaster, any advance warning can allow facility managers to prepare more for the initial event in hopes of limiting the damage.

Jay Leone of Jones Lang LaSalle, who manages the Southeast Financial Center in Miami, says that it's critical to take advantage of that lead time. If you have multiple days advance notice, such as with a hurricane, then it makes sense to have checkpoints during preparations.

Time is critical in helping limit the damage created by a disaster. But the other side of the coin is that advance notice can lead to disaster fatigue. In Mia mi, hurricane warnings are a relatively common occurrence. But, if three hurricanes peter out early in the season, it can lead to complacency when No. 4 comes along. What a hurricane is going to do when it makes landfall can't be predicted with complete accuracy, so how to react is often a guessing game.

So, to be adequately prepared, facility managers have to use that time to assume the worst, even if it means taking some grief after the fact. Leone's attitude is that there's no such thing as being too careful.

"I'd rather have the tenant mad at me because I prepared too much than not enough," he says.

Of course, not all disasters offer early warning. When one of those arises, the human element looms especially large.

"The biggest challenge of the emergency that happens suddenly is the pressure," Bryant says. That pressure lands squarely on the shoulders of the facility manager.

Drilling the staff, tenants and others involved repeatedly will help increase the odds that they'll respond positively in a real-life situation, but it's no guarantee. After all, nobody's life or wellbeing is on the line during a tabletop.

Leone points out that it's impossible to know for sure how any member of the facilities or security staff will react in a crisis until they go through one. While more experienced or less excitable members of the staff can help keep everyone on an even keel during 48 hours of preparations for a hurricane, that goes out the window when there's no time to prepare.

"It's tough because it becomes a little bit more of a personality question for each of the people that are going to be involved in it," Leone says. 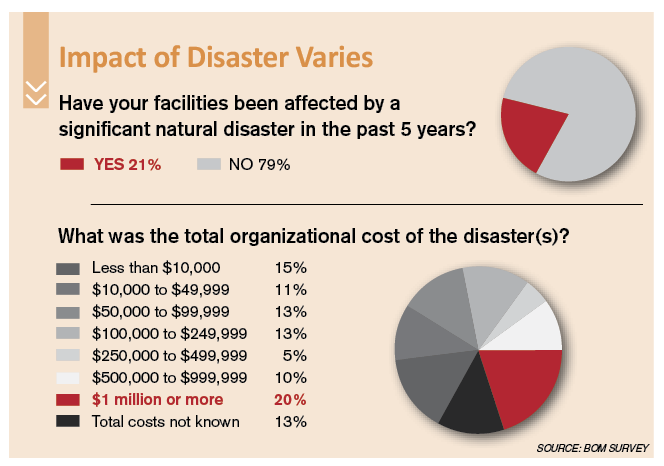 After a Disaster, Generator Fuel, Vendors Are Important