At the University of Alabama, New Laboratories Are Designed For Collaboration

By Patrick McIntyre   Educational Facilities
OTHER PARTS OF THIS ARTICLEPt. 1: This Page

The design of academic research laboratory spaces for the different fields of engineering has in years past focused on both individual departments and researchers/principal investigators doing independent research in their own individual laboratories. Over the past decade, however, this concept has increasingly given way to a new design paradigm. A recent and excellent example can be found in the new laboratories at the University of Alabama’s College of Engineering, which are designed to encourage interaction and collaboration.

The college needed to expand due to the growth of its education and research programs. Ten years ago, existing engineering spaces on the University of Alabama campus in Tuscaloosa were spread out in older, smaller, and ill-equipped buildings. An evaluation of the situation determined the need to bring together the researchers and students who inhabited these buildings — the majority more than 50 years old — in four new academic buildings to be constructed on a new engineering quadrangle. The planning and design of the College of Engineering’s third and fourth buildings, known as the South Engineering Research Center (SERC) and North Engineering Research Center (NERC), focused on multidisciplinary education and research.

Our firm created a building program and design for those two buildings where researchers and graduate students from different departments in the College of Engineering could work in a collective group referred to as “Thrust.” Thrust would allow students and researchers to interact, collaborate, share intellect, and work on multidisciplinary research projects with grant funding from federal, state, and private sources.

The design of building and spaces in both SERC and NERC was aimed at locating offices away from research labs and grouping them together in separate areas intended to encourage interaction and impromptu gatherings among principal investigators. Graduate students’ work areas would no longer reside in laboratories near equipment and away from other students, greatly reducing the potential to interact. Instead, they now work together in an open workstation area near the labs. This arrangement encourages them to gather and discuss research, which creates a community to network among themselves and faculty members.

The core laboratory spaces in the two buildings — one completed in 2012 and the other in the summer of 2013 – include: Automotive Combustion and Energy; Electromechanical Systems; Structures; Dynamics; Embedded Systems; Composites and Nanocomposite; Tribology and Surfaces; Materials Processing; and Manufacturing and Electronic and Photonic Devices Cleanroom. These spaces provide needed support systems and equipment based on the type of research being undertaken. For example, the Automotive Combustion and Energy spaces were designed to provide a controlled space to perform research using test equipment, with requirements to address noise, vibration, high temperatures, and delivery of combustible fuels. The resulting research space facilitates gathering of researchers to discuss the ongoing research.

Another example is the cleanroom suite, in which equipment with very specific environmental requirements is kept and managed in a controlled area. The cleanroom’s core laboratory space allows researchers to share equipment and develop research that may assist others. While the space itself may not encourage interaction due to defined protocols for its use, locating the office and meeting areas near the cleanroom enables researchers and graduate students to meet and discuss issues associated with activities that take place in the cleanroom. (See diagram below: cleanroom = yellow; offices = green; interaction = blue.) 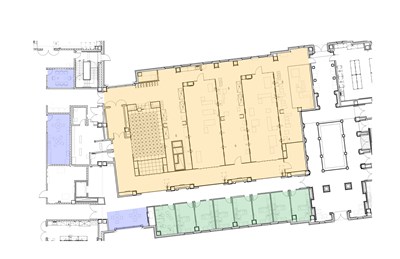 The approach used at the University of Alabama is similar to other newer research laboratory facilities, where there are plenty of spaces for meeting formally or informally to interact and collaborate with others and where people are grouped in spaces around types of laboratory functions. The Thrust concept for groups has led to additional thinking about grouping people and spaces around types of laboratory functions and spaces.

Patrick McIntyre, LEED AP, is a laboratory planner in the science and technology practice area of architecture, design and planning firm Lord, Aeck & Sargent. He can be reached at pmcintyre@lasarchitect.com. Lord, Aeck & Sargent was laboratory architect for University of Alabama’s South Engineering Research Center and North Engineering Research Center. The architect-of-record was Davis Architects for SERC and Williams Blackstock Architects for NERC.