From Codes to Climate, Many Factors Can Swing Product Selection

At first glance, it would seem that choosing the doors and accompanying hardware that make the most sense for a facility would be a fairly straightforward task. Not so.

“A door opening is fairly complicated,” says Mike Tierney, standards coordinator with the Builders Hardware Manufacturers Association. “You have to know the size of the door, the swing of the door, and the preparation required for the hardware.” In addition, the facility executive needs to estimate how often the door will be used and how much punishment — whether from would-be intruders, fire or the elements — it will have to endure. The facility executive also should be aware of any building codes with which the door will have to comply.

It makes sense for facility executives to focus on the types of doors and hardware that will be needed for a building early in the construction planning process. Even though the products won’t actually be needed until construction is well underway, planning ahead can save time and money later on.

Facility executives who put off their analysis may end up having to rush through the buying decision as construction begins winding down. Or they may find that their first choice of door products isn’t available when needed. That means they will need to find an alternative, says Claude Hollyfield, architectural hardware consultant and director of training with ASSA ABLOY Door Security Solutions.

In the worst cases, it becomes necessary to rip out work that’s already completed. This can happen if the door hardware requires access to electricity, but this fact doesn’t come to light until the walls surrounding the door already are in place, says Sean Ahrens, senior security consultant with Schirmer Engineering.

For instance, if a particular doorway will require a “request-to-exit” device, which allows someone inside the room to leave without setting off security alarms, it’s best to plan for this early on. It typically costs more to install a single device at a time. Facility executives should plan ahead, and pull additional cables to support future technologies and sensors. This will minimize the need to go back and rip out walls already in place, says Ahrens.

Before deciding which products to purchase, the facility executive needs to know whether the doors and hardware will have to meet any building codes, says Val Brushaber, first vice president of the Door Council of the American Architectural Manufacturers’ Association, and director of product management, certification and architecture with Hurd Windows & Doors. Most codes cover several hazards, including design pressure and structural load, air filtration, and water penetration, Brushaber says.

Doors installed in high-rise buildings, as well as in facilities located in coastal areas, are most likely to have to meet building codes. For example, because of the hurricanes in the past few years, Florida has some of the toughest codes in the country. “If I’m in Florida, working on a major hotel, my design will be different than in Kansas City, because of hurricanes and corrosion due to salt water,” says Jim Blakely, vice president with Certified Testing Lab.

Many municipalities also have local fire codes that require, for example, doors and locks to enable occupants to exit the building in emergencies. Most codes also specify that any doors installed in a firewall be rated for fire protection, Hollyfield says.

Facility executives need to balance the need for security with the need for life-safety, says Ahrens. Occupants need to be able to quickly exit a building during a fire or other emergency. This can be accomplished in several ways. An office building may be secured with traditional electronic locks that de-activate when a fire alarm sounds. “Effective security in an emergency is when people can’t go in, but they can get out,” Ahrens says. However, some areas, such as stairwells, can never be locked. These areas of the facility should be identified.

Most doors also need to comply with codes that limit the height of the threshold or sill, Brushaber says. These regulations are designed to allow wheelchairs to easily traverse the doorway and to minimize the chance that people will trip over a protruding sill.

for doors and door hardware in the planning process can have serious consequences when construction is done. If the doors and hardware installed in a facility fail to meet applicable codes, the building code official or fire marshal may “red tag” the building. That is, the official can refuse to let occupants inside until the deficiencies are corrected, Brushaber says.

Another attribute to consider is the exterior finish. Some facility executives choose a certain type of door — solid wood, for example — because they like they way it looks when first installed. But it is also important to consider the impact of the outside elements on the door’s appearance. Wooden exterior doors can quickly degrade when exposed to sun, snow and extreme temperatures. While this doesn’t mean that they shouldn’t be used, facility executives should consider the upkeep required to maintain their appearance.

The finishes on doors and hardware in coastal areas also are vulnerable to degradation from salt spray. The hardware should be stainless steel or coated with a corrosion-resistant finish. “Otherwise, it will rust and lock up,” says Brushaber.

It’s not just the elements that put doors to the test. Many doors must withstand frequent use and even abuse. For instance, door levers installed in schools are at the mercy of students who often jump up and repeatedly pull on them.

Even in locations where security isn’t an urgent concern, facility executives should carefully plan door hardware that can deliver results. For example, facility executives often place lightweight locks in restroom stalls. Given the wear-and-tear that these locks experience, it can pay to invest in heavier locks at the outset.

For an entry that requires greater security, a facility executive may choose a 16-gauge, rather than 18-gauge steel door, Hollyfield says. A door on a detention facility may be heavier yet, at 14 gauge.

Not surprisingly, a heavier door requires heavier hinges, says Brushaber. “You want to make sure the hinges can handle the weight of the door over the long term.”

The choice of lock also contributes to door security. Locks come in two grades: 1 and 2. According to Schlage Commercial Security Products, Grade 2 locks typically suffice when the goal simply is to keep most people from entering a room. However, Grade 1 locks are stronger and do a better job of truly securing a building or room. In addition, Grade 1 locks that meet American National Standards Institute (ANSI) / Builders Hardware Manufacturers Association (BHMA) requirements typically have shown in tests that they will hold up for a higher number of door closings and openings.

Often, locks that offer more security are multipoint, says Brushaber. When locked, they connect the door to the frame at several points, including the lock itself, and at the top of the frame and at the sill. “This will give the best seal,” she says.

Of course, it doesn’t make sense to focus all one’s attention on secure doors and hardware, and none on the surrounding materials. “If you have a solid oak door with access control and a deadbolt, but the adjacent wall is just drywall, a determined criminal will go through that,” says Ahrens. “It’s the path of least resistance you need to consider when applying physical security countermeasures or controls.”

It’s helpful to think about security when choosing the door and hardware design, rather than later in the process. For instance, Ahrens says he regularly receives calls from architects who’ve purchased solid glass doors for the front of an office building because of their aesthetic appeal, and then they have to try to secure them with electronic access control. The need to create an attractive facility should be balanced with the need to create a secure environment.

Bring in the Experts

Given the myriad considerations that go into the purchase of doors and door hardware, and the fact that many facility executives are not experts on the topics, engaging an independent door expert can be worth the cost, says Tierney. “It pays to have people that know this.” An example would be an architectural hardware consultant certified through the Door Hardware Institute.

During the construction process, the facility executive should regularly meet with the designer and contractors to discuss the doors and door hardware to be installed. Tierney recommends developing a schedule that identifies each door and doorway in the facility under construction or renovation. The schedule should list the door’s location, its characteristics — for instance, does it open to the inside or outside — and any special requirements. For example, does the door in a specific area need to be fire-rated?

Along with a door schedule, a master key schedule is helpful, Tierney says. This document identifies the master keys and change keys associated with all the doors in a building. A master key can open several locks; a change key opens a specific lock.

Because most purchases of door hardware are special orders, facility executives need to be accurate when specifying products. “If you order the wrong thing, you’re out the cash you paid for the equipment,” says Ahrens.

Finally, it makes sense to avoid the temptation to specify doors and hardware on the cheap. After all, these devices are charged with securing both the occupants and equipment inside a building. “If you scrimp on price, you’re typically scrimping on quality,” says Brushaber. 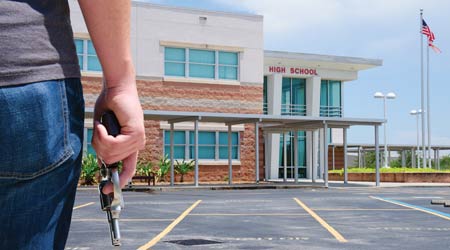 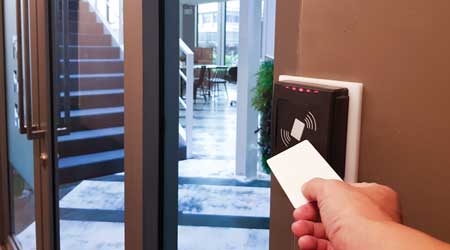 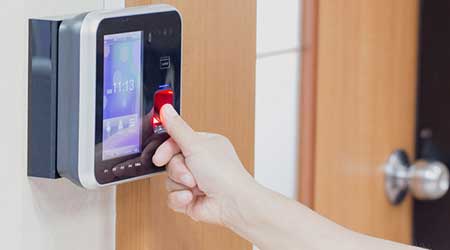