After five years of pre-development, construction on a 1.2 million-square-foot high-end condominium and mixed-use development at 440 N. 42nd St. in New York City began in mid-2008. In December of that year, due to the deepening recession, the construction budget for the project was slashed from $500 to $400 million.

Conventional wisdom is that a 20 percent budget cut midway through a construction project would result in a building that is at least 20 percent less good than the original design. Any bells and whistles would be immediately yanked and the scope would be altered to reduce square footage. Not so on this project.

After a bit of hand-wringing, the project team led by owner and developer The Related Companies, calmed down, got together, reworked contracts, reworked design details, and came out on the other side with a project that meets its new budget, didn't lose any of its scope or program, and is still on target for its LEED Silver certification.

As the Great Recession has wrought havoc on new construction, the traditional cut and slash strategy has been the fate for many buildings — those that even get built, anyway. The recession certainly has exacerbated the notion of Murphy's Law during construction — that anything that can go wrong, will. But even the steepest challenges can be opportunities.

What follows is a look at several projects for which the recession caused problems — problems, though, that forward-thinking project teams were able to overcome. These success stories show how owners and project teams collaborated in far-from-optimal conditions, how they eschewed traditional notions of design and construction, and how the strategies they've used can be applied in similar ways to just about any construction project — in a recession or not — that meets with budget and other challenges.

The one commonality of all budget-addled projects seems to be a need to do extensive value engineering. But value engineering can look decidedly different depending on who's doing the engineering and where that person is adding (or subtracting) value.

"Traditional value engineering strips value, but doesn't always involve engineering," says Charlotte Matthews, vice president, sustainability, for The Related Companies. When budget was cut on the 440 N. 42nd St. building, Matthews and the project team wanted to ensure they reconstituted the project in a way that didn't detract from the original goals. "We just had to design a lot smarter," she says. "We really looked at the project. We had our entire team look at every aspect. What you learn is that normal development has a lot of fat in it. The process of bringing a project back to budget will help you cut out the fat and put meat in its place."

What Matthews describes is an integrated re-design process she says allowed her team to reduce redundancies — combining two mechanical rooms into one, in one instance — but maintain the scope of the project.

"You can't just put things in a bucket, assign value and cut that way," says Matthews. "With integrated design, we'd tweak one thing that would affect the whole building, and eventually, through an iterative process, each change added up to a better building."

For Matthews, a better building also meant one that could turn out to be more energy efficient than its initial design. The integrated design/value engineering process simply provided a better understanding of how systems work together. "It's rare to see a redesign that actually improves efficiency," she says. "What we learned is that real energy efficiency isn't 15 strategies and a microturbine. It's a series of big and small decisions about planning, distribution and systems."

Another victory on the project was simply maintaining the original scope —which includes a theater, a subway stop, luxury condos, apartments, a hotel and retail space. Matthews says working with all the stakeholders on priorities was challenging, but communicating with them to ensure that everyone was still getting want they wanted within the parameters of the new budget helped the team learn important lessons about how to be smarter and more efficient with design.

Maintaining the scope of the project is one of the most difficult things to do when money or the timeline is tight, says William Harris, principal with Signer Harris Architects. The key for owners, he says, is to make sure the designers understand not just the program, but the purpose behind the program.

"It's an excellent strategy for addressing cuts," he says. "If we understand why space is needed, we can apply creativity and hit purposes in a different way."

For instance, in a major renovation project Harris worked on for Brown University, he says that he — working in conjunction with the university's facilities team, with whom his firm met once a week — was able to redesign an old library space as a multipurpose room, avoiding the need for six separate rooms for each of the six types of spaces needed.

Especially in a recession, Harris says it's also important to make sure the scope doesn't widen, as is sometimes the case. On the Brown project, it became clear that a vestibule in the building really warranted a renovation as well. In other years, it would've been added to the scope, but not so in a down economy with budget-conscious owners.

"There is definitely a heightened awareness of scope creep," he says. As advice to owners, he adds: "Make sure you have a clear understanding of ‘must-haves' vs. ‘nice-to-haves' and never use contingency budget on ‘nice-to-haves.'"

Getting creative with a project's timeline can also help maintain its scope — especially when funding is an issue. At Marquette University, original plans for a $100 million academic building called the Discovery Learning Complex were altered to break the project into two phases. In January 2009, as the recession deepened, donations were beginning to dry up with only about $70 million raised, says Tom Ganey, university architect for Marquette. So the project team took stock and decided to move forward with a first phase of the project, a $35 million, 115,000-square-foot building.

Because goals had already been set for the project as a whole, the challenge was to decide what would be included in the first phase. "The original planning for the project informed how we programmed each phase," says Ganey. "We identified the two key lab spaces that would have the biggest impact." The five-story project, which broke ground in March 2010, will only be built out on the first two floors, which will be occupied in August 2011. The remaining three floors will be built out and then occupied in August 2012. And the second phase of construction, which will be a 150,000-square-foot building that will be directly linked to the first phase for a total building size of more than 260,000 square feet, will be completed after that — assuming funding becomes adequate to continue the project.

The project team for the new $417 million Columbia St. Mary's hospital building in Milwaukee, Wis., also amended its timeline to ensure recession-related funding issues wouldn't sink its project. In January 2009, owners decided to slow the timeline to delay opening about 10 months. The reason: To conserve cash in case the recession worsened. "Instead of running their horses as fast as they could go they decided to run at a slower pace," says William Wahle, senior project manager for HOK, the project's lead architect. "They were hedging against the market." Because contracts only contained minimal penalties for delays, the hospital was able to conserve its cash for very little cost. The 312-bed hospital opened in September 2010.

Continue Reading: Lessons From the Recession 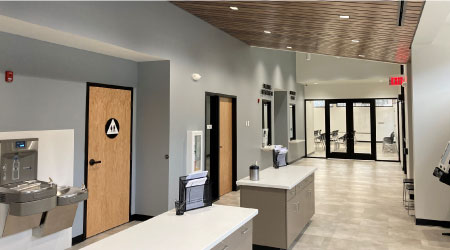 How to Solve Facility Challenges Due to Community Growth