By Karen Kroll   Design & Construction
OTHER PARTS OF THIS ARTICLEPt. 1: Optimize the Acoustics of Open Offices Pt. 2: This Page

The cubicle partitions that frequently show up in Dilbert cartoons can play a role in helping to mute the noise between workers. "The closer you place people together, the more you need to think about partitions," Patel says.

Many offices are moving to increasingly lower partitions to introduce an even more open feel and allow daylight to travel as far as possible through the building, Trask says. In fact, it's not unusual for some to be only three or four feet high, or for just one or two sides of a workstation to be higher. "The market has spoken and no one wants heights of five feet or more," he says.

But the lower heights also reduce the panels' ability to absorb sound. To mitigate this effect, some panels have glass panes running along the top. These allow daylight to make its way further into the building, but also help control sound, Trask says.

Another option is to use hanging wall panels, says Joiner. These run about two-by-four-feet, and can hang from the ceiling or on walls. Along with adding a decorative element, the panels also absorb sound, he says.

The walls themselves can provide some sound absorption, which is especially important when offices need to be located near air handling units, Schwob notes. "You want to design the walls to attenuate the noise." For instance, fiberglass can be placed in the cavities to absorb the sound. Gypsum board also can block sound by adding mass to a partition. Staggered studs will break the connection between two sides of the wall, also helping to block sound. Reducing fan noise and air velocity in the ductwork, and improving the fittings that cause turbulence also will help reduce sound levels.

The final letter of the acoustics ABCs stands for "covering." That's the role of soundmasking systems. Soundmasking systems consist of multiple speakers that emit a constant background noise, reducing the intelligibility of voices and the distractions from remote sources, Merrill says. Workers still are able to understand people talking next to them.

There are two general types of soundmasking systems: in-plenum and direct field.

In the former, speakers are placed in the plenum above ceiling tiles. Ideally, the speakers are evenly spaced between about 10 and 12 feet apart to minimize differences in the level of the sound from one part of the office to another, Joiner says. In addition, some ceiling tiles have a Mylar backing, which helps to disperse the sound more evenly.

Direct-field systems use small speakers attached to the ceiling grid or lights or installed in the tiles. They can also be designed into furniture and partitions. With a direct-field system, an enclosed office can be set up as its own sound-masking zone.

While soundmasking systems tend to be used most frequently in office areas, they also can be placed in hallways and conference rooms, but at lower volumes, Merrill says. The reason? "You want the sense of sound everywhere; otherwise, you draw attention to the system."

While the tools that acoustical engineers can use to create a productive and pleasant open office environment are valuable, managing expectations often is just as important, Merrill says. Employees who have been working in closed offices and then move to open offices may find themselves more distracted by the noise and activity around them. Getting through the adjustment period often requires someone from top management setting the proper tone. "Change management is the biggest thing,'" he says.

With effective change management and a properly designed environment, private-office holdouts may eventually come to appreciate the benefits of open office environments. 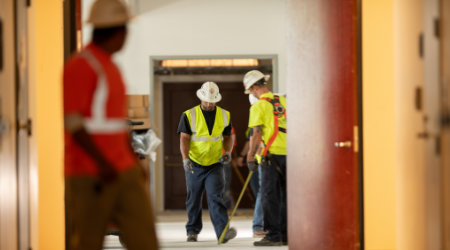