The following fundamental design considerations must be taken into account for a successful metal roofing or wall project.
By Craig A. Hargrove and Russell M. Sanders   Design & Construction
OTHER PARTS OF THIS ARTICLEPt. 1: Metal 101: Understanding Best Use Cases for Metal Roofs and WallsPt. 2: This Page

Although aluminum is the most common material used in metal systems, a range of other choices is available, including steel and copper as well as zinc, which is used in the project shown here.Hoffmann Architects

Whether it’s a prefabricated metal wall system, roof system, or both, certain fundamental design considerations must be addressed during design.

1. Structural integrity. The initial consideration for building enclosure assemblies is their structural integrity. Façade and roof cladding systems must have the ability to resist a variety of forces to which they may be subjected including gravity, seismic load, wind load, deflection, and inter-story drift. It’s important to remember that every component of the system, from the substrate to the fasteners to the panels themselves, must be considered when designing the cladding to meet the necessary structural requirements.

2. Weather integrity. The ability of the roof and façade assemblies to resist the infiltration of air and moisture is also essential. As noted earlier, these systems can be either closed (hydrostatic) or open (hydrokinetic).

In prefabricated metal façades, closed or face-sealed barrier systems rely on a primary seal between joints — often seam tape or an elastomeric sealant system — to provide weather integrity. These primary seals between panels have a shorter life expectancy than the panels themselves and are therefore the first part of the system to fail. Consequently, they present an ongoing maintenance concern.

In open façade systems, the substrate behind the panels (often exterior grade sheathing with a water-resistant coating or cladding over metal studs) acts as the primary protection against air and water infiltration. In such cases, water that finds its way behind the metal panels must be channeled to the exterior of the building through a system of flashing and weeping. Even with such protection, the volume of water that can infiltrate behind the panels should be limited.

Hydrostatic roof systems rely on the pitch of the roof and the integrity of the panel seams (often enhanced with seam tape, sealant, or solder) to keep water from infiltrating the building. Hydrokinetic systems also limit water infiltration through roof pitch and the integrity of seams, but do not eliminate it. In such systems, an underlayment consisting of, for instance, 30 pound felt paper and a slip sheet (building paper), must be applied to the substrate to protect the building interior. In certain climates, membrane protection at the roof perimeters extending at least 24 inches onto the building must also be considered to limit the deleterious effects of ice.

Steep-sloped roofs must include adequately sized and configured gutters, leaders, and downspouts to remove water that collects on the surface or substrate. Gutters can be external or concealed.

Lastly, weather integrity includes not just resistance to moisture, but to air. Most governing authorities now have specific requirements limiting the flow of air through the building enclosure. As with moisture protection, closed systems rely on the metal panel system to resist such air flow, while open systems depend on a substrate barrier for such protection.

3. Thermal performance. Building enclosures must meet increasingly stringent requirements regarding energy and thermal performance. Metal systems benefit from having a low thermal mass; however, they are not very good insulators. Therefore, the use of insulation within the assembly must be considered.

Energy performance requirements vary depending on climate zone and the model building code adopted in a region. In New York City, for instance, roof assemblies must include at least R-30 of insulation. Metal framed walls must include R-7.5 of continuous insulation plus an additional R-13 of insulation between the sub-framing studs.

Linear and point transmittances (thermal shorts that transfer energy from the interior to the exterior of the building) should be considered and eliminated to the greatest extent possible. Such measures also help reduce the potential for condensation within the assemblies.

4. Expansion and thermal movement. In general, metals have a high coefficient of expansion, meaning that they will expand and contract significantly in accordance with temperature changes. While some metals, such as aluminum and zinc, have a higher rate of expansion than others, all metals will expand and contract in reaction to changes in surface temperature. Accommodation for such movement must be built into the design to avoid issues such as buckling and deterioration of system integrity.

5. Combustibility. The use of certain building materials within a prefabricated metal panel enclosure system (such as foam plastics as insulation or a core material in composite metal panels) may present issues relative to combustibility. The design professional should reference the applicable code for requirements governing the combustibility of such assemblies, and keep in mind that it is not just the assembly itself that must conform to these requirements. Detailing of the transition to adjacent building systems (such as between floors, at windows and doors, and between walls and roofs) must be considered to ensure that the required protection is maintained. 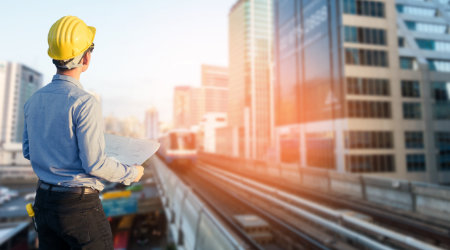