Even when they are run well, energy-rich data centers offer a special challenge to protecting data center employees and electrical workers against arc flash dangers. But according to some experts, two types of “culture problems” at some data centers can create additional risk.

The first is the pressure to keep the mission-critical data center operating at all costs, rather than de-energizing to allow safe electrical repair. The second is the inadequate background of some data center managers that makes them ill-equipped to properly appreciate arc flash hazards.

“Probably the biggest risk to data centers is the culture of,  ‘No matter what, you can’t turn it down or turn it off or de-energize it to work on it safely,’“ says Doug Tellin, of Electrical Safety Specialists.

The amount of live work in data centers — i.e., working on equipment that has not been de-energized — “occurs at a much higher rate than you would see in other industry,” says Jay Smith Jr., executive vice president of Lewellyn Technology, a company that specializes in electrical safety and arc flash risk assessments. “Data centers typically have facility changes and equipment updates or modifications that occur frequently. This presents a problem when it comes to working safely around energized electrical equipment.

“At many data centers, ‘live work’ occurs because the facility feels it is unfeasible to de-energize the equipment — the facility simply believes they cannot shut it down. However, most of the time it is more of an inconvenience, and OSHA will not allow live work to occur just because it's inconvenient to de-energize it. We tend to see that data centers try and justify live work; however, OSHA will not agree with them.”

Tellin provided an OSHA finding in 2011 that cited The Hartford Financial Services Group Inc. and its maintenance contractor with serious violations of workplace safety standards for exposing workers to electrical hazards at The Hartford’s corporate headquarters and data center in Hartford, Conn.

OSHA said it found that “The Hartford's data center policy required electricians employed by its maintenance contractor, Grubb & Ellis, to perform work in live electrical panels for computer equipment without first de-energizing the panels, as required under the agency's standards. Grubb & Ellis, for its part, failed to de-energize the electrical panels before having its employees perform installation work and grid upgrades on them.”

In the wake of that finding, OSHA’s area director in Hartford, Paul Mangiafico, stated, “What employers must understand is that they or their contractors must first de-energize electrical equipment and circuits before employees work on them. Working on live electrical equipment needlessly exposes workers to potential death or disabling injury from arc flash, arc blast or electric shock. Proper and effective safeguards must be in place and in use at all times."

Tellin says the infrastructure for some of the older data center systems is not set up properly. “What should happen,” he says, “is that they should set up the data systems with redundancies, to where you can shut down, say, the A side, while you work on it, and the data center will operate off the B side. That's where you start running into issues of where the equipment isn’t properly designed for maintenance shutdowns or scheduled shutdowns, so they tend to take risks and work things energized. Versus having some kind of redundancy in place.” 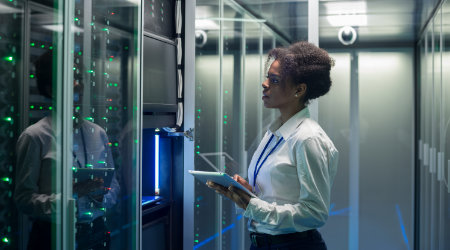