Bruce Thorpe works closely with NVIDIA's product teams to deliver the testing spaces they need quickly and on spec.

By Greg Zimmerman, Executive Editor
Data Centers
OTHER PARTS OF THIS ARTICLEPt. 1: How To Team Up With IT To Manage Data Centers, Critical EnvironmentsPt. 2: This PagePt. 3: NVIDIA's New Facility: High-Tech FM

Partnerships and trust with NVIDIA’s product teams are just as critical to success for Thorpe. A very simplified version of how he collaborates with product teams: A product team comes to Thorpe to ask for a lab. Thorpe moves heaven and earth to build out that lab as quickly as possible, making sure it meets their needs.

Thorpe says one of the fun parts of his job is working with some of the most brilliant engineers on the planet. But even so, there’s a bit of hand-holding when it comes to critical environment needs, he says. “Although we have a huge number of the brightest engineers, it can be hard for them when they come to me and ask about power supplies, for instance,” he says.

The benefit of working with product engineers, he says, is that they never tell him, “You should do this with your data center.” Instead, they ask, “Why do you do this with your data center?” That’s refreshing, he says — especially as he’s always being asked to go as far as he can. “They let me do some crazy things,” he says. “Our CEO tells me ‘Push it, Bruce. Just don’t break it.’”

He and his boss, John O’Brien, the senior director of real estate and site services, have a running joke. It involves President Kennedy’s speech in 1961 about going to the moon.

Kennedy said the country’s goal was not just to “land a man on the moon” but also “returning him safely to Earth.” That last part, says Thorpe, is the hard part. It’s often easy to get the infrastructure up and running, but will it work as it’s supposed to, long-term, and to the requirements of the product team that requested it?

“We’re pushing the envelope in a lot of ways from a critical environments perspective,” says O’Brien. “The challenge is not just to build the environment that can handle their requests, but to make it work successfully. It’s not just getting the machines to work, it’s to get them to work well and efficiently.”

And, in many cases, quickly. “The work here is very fast-paced,” says Thorpe. “The environment is: We need it now.”

Because of the trust and partnership O’Brien, who has also been at the company for about six years, and Thorpe have built with both product teams and IT, communication about needs and realistic timelines has improved.

“When we got here, we’d literally be notified when a piece of equipment arrived on the dock,” says O’Brien. “So we’d plug it in, and it wouldn’t work. But now, we can show how to value-add on a project. We’re involved early, and this helps the project go much more easily.”

Thorpe discusses one recent project that required redesigning the cooling system for massive emulator machines. These new machines have a temperature rise of 15 degrees across the heat exchanger, as opposed to 10 degrees on the previous generations. “The system has to be ready when these costly emulators arrive on site,” says Thorpe. “We had to move very quickly to redesign the cooling system to work with existing systems and the new system and be able to cut over without interruption. It’s a very fast-paced design process, which leaves the traditional design process behind.” The entire process took only eight months — from initial meetings when the product team informed Thorpe what they were up to, to the implementation.

“Bruce has to stay nimble because what we’re working on now wasn’t even on the drawing board two years ago,” says O’Brien. 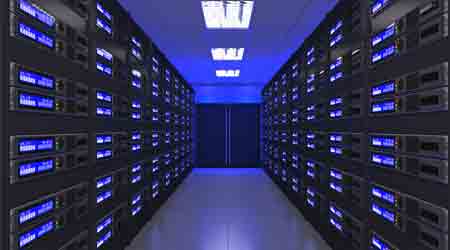