Part 2 of a 3-part cover story on how and why owners are investing in repositioning.
By Naomi Millán, Senior Editor   Commercial Office Facilities
OTHER PARTS OF THIS ARTICLEPt. 1: With Hot Commercial Office Market, Repositioning Buildings Is On The RisePt. 2: This PagePt. 3: Photo Gallery: Before and After Photos Show Value of Building Repositioning

Given that a good chunk of existing office buildings was built in generally the same time frame, the structures share in common crimes. Again and again, an utter lack of street presence, ugly and empty lobbies, and bad entrance sequences come up as areas that needed urgent attention. “Buildings are like people,” says Perruzzi. “You get one opportunity to make a good first impression.” And when you have prospective tenants touring multiple facilities in a day, you want to be memorable, but for good reasons.

At one of his firm’s projects, 101 Station Drive, a three-floor, 208,000-square-foot, formerly single-tenant office just outside Boston, the building was making a poor first impression. When it was repositioned as a multi-tenant building, a major issue was the wide-open and dead lobby and the entrance sequence, which just dumped people from the building’s drive into the front entrance. The vehicle and pedestrian entrance sequence was completely changed, making it roomier. Doing that made it possible to create an attractive plaza in front.

The lobby was enlivened with multiple opportunities for gathering, food, and other activity. “People who are looking at buildings in the suburbs want an urban experience, but they don’t want to give up their suburban location,” Perruzzi says. “They want the best of both worlds, and so what we try to do is create an urban lobby by creating a lot of activity so it’s not a blank space all day long.”

The lobby was also the first area of attack for a downtown Boston office tower, 53 State Street. The 40-story glass tower adjoins the Boston Stock Exchange Building with a seven-story atrium, and when it first came on the market in 1985 was celebrated as a showpiece for the city, with its blend of old and new, says Pandya. But times change, and by the time new ownership decided to reposition the building, the 11,000-square-foot lobby came across as cold. “There was no furniture, no sense of gathering, no announcement of what the value of the building really is,” he says. A big chunk of space was shortly to become available in the building, so the ownership wanted to get in front of the market and make a splash, he says. 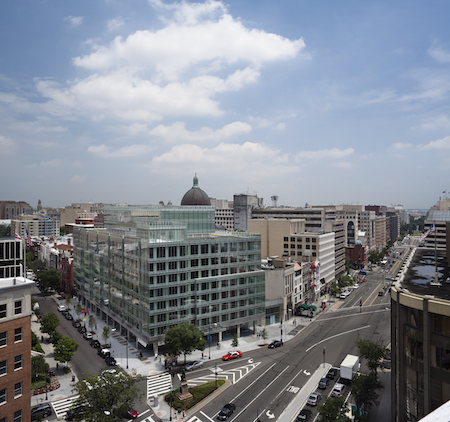 Photo caption: In the 1960s, a historic church was torn down and replaced with a drab office building at 1225 Connecticut Ave. NW, and the resulting public outcry helped catalyze the preservation movement in Washington, D.C. Working closely with the city’s Historic Preservation Office, the design team included in the facade of the repositioned office building an element, culminating in a partially enclosed space on the roof (left front corner of building), echoing the original church’s belltower. The building earned a LEED BD+C: Core and Shell Platinum designation. Credit: Paul Warchol

Brighter finishes, local art telling the history of the building, and a small cafe were installed to activate the lobby. Plus, the small cafe brings in a little more rent. The building was able to attract the Boston Globe, and has become a big draw again. The success of the work in the lobby led the owner to install a conferencing facility on the 12th floor, and to start looking at doing a roof deck and fitness center. “The building is starting to change dramatically to stay competitive in the market,” says Pandya, whose firm was the architect for the project.

Sometimes, it can be a little painful to give a building what it needs to perform better in the market. The Brill Building is an 11-story, 175,000-square-foot office building built in 1931 at Broadway and 49th Street in Times Square; it is where many American songs from the 1950s to 1980s were written and recorded. In its heyday, the building housed well over 150 music businesses, leading to floors filled with small offices and music studios. The building is nearing completion of a reposition, which has changed the existing floor plans to full-floor tenant spaces geared to today’s entertainment companies.

Due to its individual landmark status, all changes to the building had to undergo extensive review by the New York City Landmarks Preservation Commission. The building’s original lobby was a feature prized by Carl Omark, senior asset manager with Allied Partners, the building’s owner. While beautiful, it opened onto Broadway, creating a hectic entrance for the office tenants and forcing them to go through the crowds coming for the retail spaces on the lower floors. As part of the reposition, the office entrance was moved to 49th Street, and the lobby completely separated from the retail space. “As much as I cringed when we had to give up the old lobby — a fantastic art deco lobby — we gained about 15,000 square feet of leasable square footage on Broadway, which is very valuable on a per-square-foot basis per year,” says Omark.

Changing Times
Repositioning is really a continuous process. Building owners need to stay on top of market trends and understand where they should be aiming their efforts, says Brian Harnetiaux, BOMA International’s chair-elect and senior vice president at McCarthy Cook. “Real estate is changing,” he says. “It used to be a very landlord/tenant relationship, and now it’s much more of a partnership. The landlord is a partner with the tenant to help recruit new talent, to create an environment in a building where their employees will enjoy it.” Leases are long-term decisions for tenants, and it’s not easy to just pick up and move somewhere new. “They’re looking for a partner that will provide the office location that they want to be at for however many more years,” he says.

And even though the majority of repositioning projects occur when a building has changed owners, there’s no reason to wait until that transition to do something to maximize its value. What does it take to get an existing building owner or facility manager to adopt the same mindset as a new owner, to look through their existing building to see if there’s any way to find more value, wonders Eugene Flotteron, principal with CetraRuddy Architecture. “It’s not a lot of money to spend to do a little bit of a study and come up with a plan,” he says. “You’d be surprised what’s in these buildings. Don’t let the next guy be the one to find it. You should be the guy that takes full advantage of your building.” n 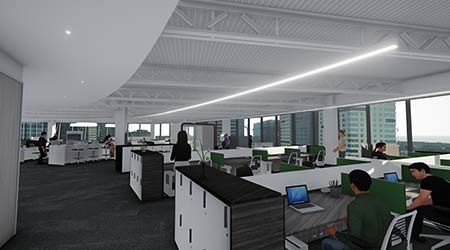