By Karen Kroll
Ceilings, Furniture & Walls
OTHER PARTS OF THIS ARTICLEPt. 1: This PagePt. 2: Open Plenums Gain Popularity, But Be Careful

Ceilings have become crucial elements in the design and acoustics of many commercial spaces. If you haven’t looked up lately, you may want to take a gander. The unrelenting, albeit functional, grids of two-by-two acoustical panels that have comprised many commercial ceilings are being replaced with open plenums, colorful baffles, ceiling clouds in varying shapes and sizes, and perforated wood and metal panels, among other interesting, aesthetically pleasing materials. “We have more tools in the tool box,” says Anthony Colciaghi, principal with architecture and design firm Francis Cauffman.

“You can really influence the fit and feel of a space when you use the ceiling plane as a design element,” says Deb Barnes, director of interior design with HGA Architects and Engineers.

Changing tastes account for some of the greater attention and larger budgets now focused on commercial ceilings. Open plenum designs often are seen as edgier and newer, and even an indication of the occupants’ creativity or innovativeness. A start-up or creative firm may not be interested in a typical Class A office building, says Christopher Goggin, principal and design leader with Gensler.

Another driver is the continued evolution of open office arrangements. Increasingly, even partial cubicle walls are being eliminated. That can leave large, open spaces with no visual barriers. Without office walls and cubicles to provide breaks in the ceiling plane, a traditional closed ceiling can stretch for thousands of square feet. “It looks like a pancake,” says Dave Madson, principal with CBT Architects.

Acoustics is another concern. When offices and cubicles are eliminated, more employees can fit into a space. That increases the noise level.

When office designs do incorporate walls, more are made of glass, says Bryon Sutherly, senior project architect with Hixson Architecture, Engineering and Interiors. Rather than absorbing sounds, as most drywall or cubicle walls do, glass reflects it. Small amounts of sound are amplified. “What used to be an acceptable level of noise, now is too much,” Sutherly says.

The result? Ceilings are being called upon to play a greater acoustical role in many offices. “While a sound-absorptive ceiling has been important to control noise and absorb sound, it’s now even more important because we’ve lost some of the other components,” says Ioana Pieleanu, a senior consultant with Acentech, an acoustical consulting firm.

In addition, even as many companies reduce or eliminate individual offices and cubicles, they’re adding conference rooms of all sizes, as well as casual open areas in which groups of employees can meet to discuss projects. The ceiling design can help delineate different workspaces, Colciaghi says. So baffles or clouds might be placed to distinguish a collaborative area from private work areas. 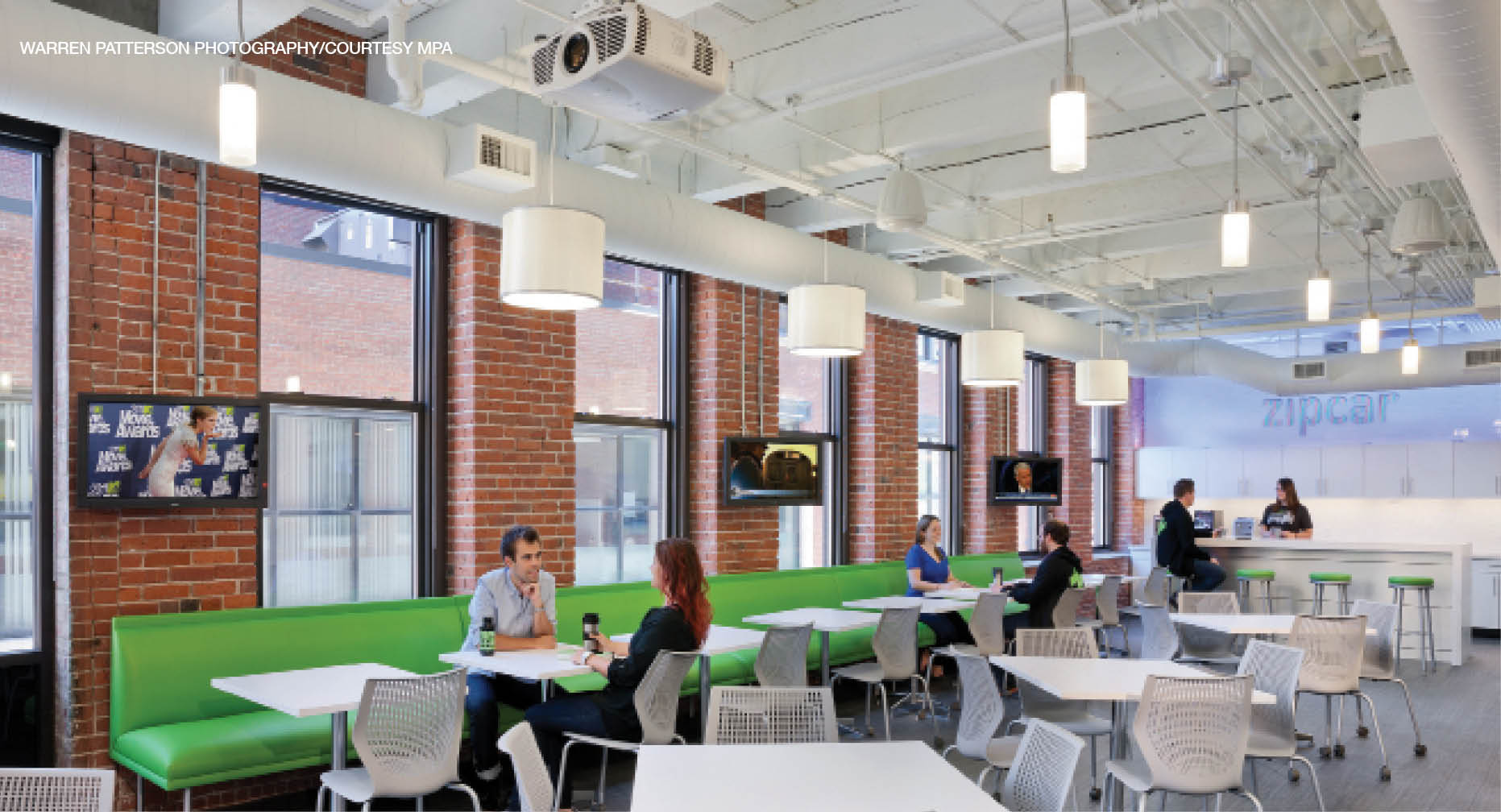 Photo caption: The open plenum at Zipcar was designed to enhance the visual appeal of the space, located in the Innovation District in Boston.

One of the most popular ceiling designs is the open plenum. “The volume you can create by opening the ceiling is really desirable,” says Barnes. Some firms like the way an open design embraces, rather than disguises, the functional elements within a ceiling, she adds.

To be sure, it’s unusual to have a space in which the ceiling is completely open, Goggin says. Instead, a building may incorporate “different levels of design refinement.” An open ceiling may cover much of the work area, while closed ceilings in conference rooms add interest and provide speech privacy.

One way to add interest to an open plenum is through the use of clouds. These panels, often made of sound-absorptive fabric, foam, or fiberglass, are suspended horizontally or vertically from the ceiling. While many are white, a variety of colorful options are available. Either way, they help break up a space and add a third dimension to the ceiling plane.

Clouds also “soften the acoustics,” Bailey says. Not surprisingly, they’re often found in call centers and other areas with higher noise levels. To boost their sound absorption capabilities, spray-on cellulose insulation is sometimes applied to the backs of clouds.

One note: While clouds can obscure some mechanical or other building systems suspended from the ceiling, designers and facility managers still need to make sure anything above them looks presentable, Barnes says. The systems will remain visible.

Another design option is a baffle. “It’s trendy, new, and has sound-absorptive properties,” Pieleanu says. Baffles are typically made of felt or another fabric, such as recycled cotton. In food-preparation and other areas that must stay sanitary, baffles can be covered in a film that withstands frequent high-pressure, hot-water washes.

Like clouds, baffles can hang vertically or horizontally from the ceiling, joists, or the underside of the floor above. Vertical baffles can give a sense of height, Madson says.