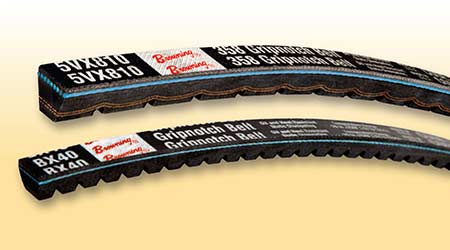 “These belts will set a new standard for the industry,” says Don Sullivan, marketing manager for Browning. “Many technicians fail to account for the fact that a belt may reach 110-115 degrees while simply running in the sheaves at 72 degree ambient temperature. If this heat is concentrated under a solid metal guard and the ambient temperature rises, it does not take long to approach the 140-degree limit for common polychloroprene belts. On a rooftop in summer, even in northern climates, a V-belt drive can easily reach this critical temperature. The EPDM formulation gives a 79-percent wider temperature window than polychloroprene. The original belts expanded the offering to all notched belts and further developed the temperature range to 250 degrees. This heat rating will be valuable in all applications and industries, but particularly in warmer climates.”

EPDM is a synthetic rubber compound formulated for superior strength, flexibility and resistance to heat, decay, ozone, oxidation and humidity.

The V-belt styles can also improve drive efficiency 2-3 percent over wrapped style V-belts, saving about $300 per year on a 20 horsepower/15-kilowatt drive at 12 cents per kilowatts per hour.

“U.S. Department Of Energy DOE/GO-102005-2060 makes this recommendation, because in a typical commercial application with 20 identical air handling units of this size, a 3 percent energy savings at 12 cents per kilowatt/hour is about $6,000 per year,” Sullivan says. “All these belts utilize a proprietary design that includes high fiber loading for long life, multiple plies of a unique tubular-woven knit fabric in the overcords for maximum flexibility, and wider notch spacing to increase rigidity and stability for lower stress at the cord line. They meet Rubber Manufacturers Association (RMA) standards for matched tolerances right off the shelf and are static dissipating, as well as oil and heat resistant. Coupled with the precision-ground edge for smooth, quiet operation, these raw-edge belts demonstrate how 21st century engineering and manufacturing can revolutionize a time-proven concept like the V-belt.”