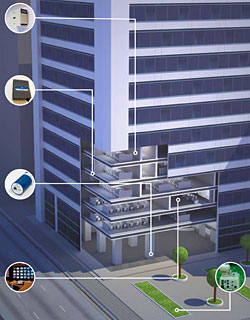 CBRN Detector features a layered approach to facility security, emphasizing the use of widely distributed, low-cost detectors combined with a smaller number of identifiers. ThreatSense sensors are strategically placed, allowing for rapid detection that is independent from the location of the release. Radiation source identifiers are located at choke points in the traffic patterns, such as security checkpoints. Once a potential threat is detected, sensors send an alert to the ThreatSense monitoring personnel via its command-and-control system, and confirmation testing as well as alarm adjudication begins.