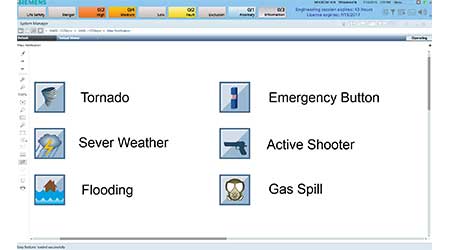 Siemens released the next generation of its Desigo Mass Notification System as part of the Building Technologies Division’s overall Intelligent Infrastructure Solution for the market. This multi-layered alerting system can be used in a single building or across a large campus to communicate a series of emergency and non-emergency messages via visual, audio, and digital notifications. Using a combination of message delivery methods that includes visual warnings, audible alerts, and text messages ensures that the right message reaches the right people, no matter where they are.

“The latest system modifications let operators move swiftly and efficiently when an important message needs to be communicated to people,” says Brad Haeberle, vice president at Siemens’ Building Technologies Division. “The Desigo Mass Notification uses multiple communication methods to ensure your message reaches its intended audience, in a way that it is received, understood, and acted upon. It is part of an intelligent infrastructure for the future of buildings.”

First released in 2014, the communication system can be used as a standalone mass notification system or in combination with fire safety systems, video monitoring, access control, intrusion detection, building automation, and lighting to build the foundation of a smarter building and an intelligent infrastructure. The Desigo Mass Notification System is a module of Siemens’ Desigo CC building management station, which is the physical foundation of Siemens’ Intelligent Infrastructure Solution.