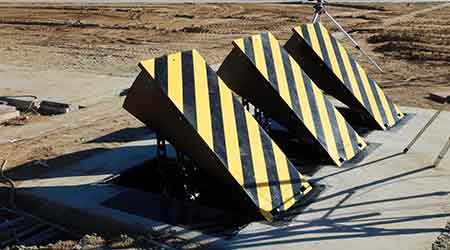 Delta Scientific's HD2055 barrier will stop a 15,000 pound vehicle traveling 50 mph and has met the criteria of the United States Department of State for continuous operations of 1 million cycles. The HD2055 was tested from February 2016 through July 2016, outside, exposed to full sunlight and the effects of climatic conditions. Cycle rate on the barrier was four per minute.

According to the report by the independent test facility, "The barrier system was found to be capable of 1,000,000 continuous operations without failure of any component necessary for continued barrier operation outside of scheduled maintenance."

Upon impact, the barrier remains in its foundation and the opening stays blocked, providing a multiple hit capability. In its M50 crash test, the HD2055 completely disabled the test vehicle, causing severe damage to the occupant department and power train. The maximum penetration recorded was less than zero. The P1 penetration rating was given because the penetration beyond the protected side of the barrier was less than 1.0 m at the lower leading edge of the test vehicle's cargo bed.

With its 24-inch shallow foundation, the HD2055 obviates the concerns of interference with buried pipes, power lines and fiber optic communication lines. The shallow foundation also reduces installation complexity, time, materials and corresponding costs. The HD2055 is perfect for high water table locations and areas with corrosive soils. It provides low maintenance as all components are accessible from the sides or top of the barrier.