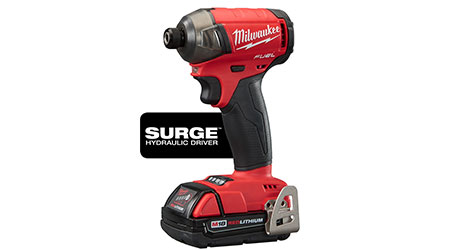 “Due to their versatility, compact size and high speed, impact drivers are easily one of the most prevalent tools on the jobsite, and we continue to drive innovation in this category. From the revolutionary performance delivered through M18 Fuel in 2012, to the major productivity enhancements delivered through One-Key in early 2016, Milwaukee has always been on the forefront of fastening technology. We are excited to once again bring this category to the next level with Surge,” says Cole Conrad, Group Product Manager for Milwaukee Tool. “With the combination of M18 Fuel technologies and fluid-drive hydraulic powertrain, Surge provides a better user experience through quieter operation and less vibration, while driving small to medium diameter fasteners equal to or faster than a standard impact driver.”

The new Surge operates 50% quieter than standard impacts, which not only makes it an excellent option for quieter work environments such as maintenance in an occupied building, it also provides inherent hearing benefits. The new tool can be used for an 8 hour day in most common applications while remaining below the Occupational Safety and Health Administration (OSHA) requirement for hearing protection.

With up to three times less vibration, the smoother performance of Surge provides more control and creates less fatigue and strain on the user. The exclusive Fluid-Drive hydraulic powertrain design essentially replaces the traditional hammer and anvil mechanism found in standard impacts with a hydraulic mechanism that generates the power necessary to create torque. Because there’s no metal-on-metal contact, the net result is smoother performance, with a decrease in noise and vibration, as well as longer sustained torque.

“In our testing, users were blown away when we told them this tool had 450 in/lbs of torque because it is common for ¼” impact drivers to have up to 1800 in/lbs,” says Conrad. “The difference is peak torque vs sustained torque. In a standard impact, the tool reaches peak torque very quickly but only holds it for a brief period of time. With the longer sustained torque delivered in Surge, peak torque is reached faster and maintained for a longer period of time, allowing it to do the same amount of work at a lower torque rating (see graph below). The result is a superior fastening solution designed specifically for small to medium diameter fasters, which make up the vast majority of applications performed by MEP trades.”