Employing a large translucent canopy made of CPI Daylighting’s Quadwall  system across the entire interior perimeter of the new building enabled the school to do just that, while also meeting California’s stringent architectural requirements, using a Class B fire-rated roof construction. In addition, the bi-color panel design showcases the school colors.

The canopy lets in daylight and blocks out heat and glare from the sun, allowing  the shade shelter in the entry atrium, as well as the second-level walks, to provide protection while still being bright and open. The cross-bracing patterns of the steel supporting structure also cast shadow patterns on the covered walks to add another layer of depth to the building, while maintaining clean, simple lines.

In addition to the skylight and fire-rated canopy that was integrated with the school’s roof system, translucent wall panels with integrated vision glass in the classrooms combine to create the appearance of a single system. In total, 7,200 square feet of translucent panels were installed. The Quadwall system is made up of independent translucent insulated panels, resulting in one integrated daylighting system. The system can be configured with additional insulation, sound reduction, dynamic shading, additional structural performance, military forced-entry resistance, or Class A and B fire-rated roof assembly (as employed at Costa Mesa).

Joined by a mechanically interlocking connection, the dry-glazed Quadwall system eliminates the need for adhesives, adding both durability and even light distribution via the system’s tight-cell technology.

The ability to customize the interior and exterior panels in ice white matte interior and green exterior in coordination with the school’s colors was an additional selling point. Should the school ever opt to change the exterior color, the panel’s removable skin technology would enable this at a minimal cost. 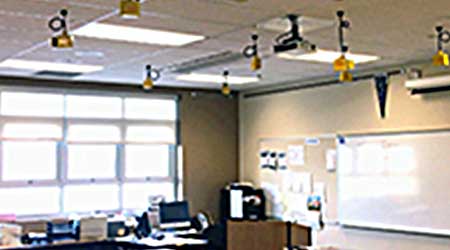 When Clark County in Kentucky replaced its circa 1960s high school with a 30 percent larger facility, monthly utility costs actually dropped by up to 35 percent, in part because of the new school’s HVAC design.

After a half-century of constant 80-degree relative humidity and chlorine processing inside Chicago’s James W. Jardine Water Filtration Plant corroded roof channels, it was time for a total makeover. 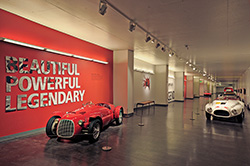 To prepare for its 2012 opening, the LeMay Museum's lighting needs received particular consideration, as exposure to natural sunlight can severely damage automotive finishes and interiors.