If facility executives weigh their options carefully, replacement windows can pay off in long-term energy and maintenance savings.

It’s not often that window replacement tops a facility executive’s to-do list. After all, many windows last for decades. And replacing them is expensive. Most commercial windows start at several hundred dollars each; from there, prices can hit four figures — not including installation.

However, retaining a facility’s existing windows also can be expensive. Many older windows are single-pane and lack tints or coating. As a result, they can drive up energy bills by letting in heat during the summer and allowing ambient heat to escape during the winter. There is also the cost of maintenance for older window frames, especially wood ones.

Although new windows can pay off in energy and maintenance savings, it’s nearly impossible to state the typical payback a window replacement project might generate. That’s because of the number of variables — window type, weather, shape of the building and HVAC system — from one job to the next. “The return on investment is specific to every job,” says Robert Holcombe, window product manager with Kawneer.

Facility executives should understand the costs and benefits of different types of windows and replacement methods, and evaluate those in light of the condition of the building, the heating and cooling system, the climate, and the state of the existing windows. It’s often helpful to involve the building’s HVAC engineers in the discussion, says Chuck Lawrence, staff architect with Moduline Window Systems. Those engineers can calculate the amount and cost of energy lost through the windows and compare it to the improvement with replacement windows.

Two measures indicate how much energy is escaping through the windows. The U-value measures the rate of heat transfer through the window. In other words, it indicates the amount of heat lost or gained based on the temperature difference between the interior and exterior. The lower the U-value number, the better. The R-value is the inverse of the U-value, so the higher the R-value, the more the window resists heat flow.

One way to reduce energy loss is with insulation. Most windows today consist of two panes of glass with a pocket of air or an inert gas between them. “That buffer helps minimize heat loss and gain,” says Patrick Hooper, product marketing manager with Jeld-Wen Inc. When gas is used, it’s typically argon, which is nontoxic, clear and odorless.

The cost of windows with an air-filled gap typically is 3 to 7 percent less than argon, says Lawrence of VistaWall. However, air also is a less effective insulator than argon. In a few cases, krypton is used. It is more expensive but offers better thermal performance. Krypton may be a better choice when the space between the panes is very narrow.

Most commercial windows are either tinted or coated with a low-e metallic layer to improve thermal performance. Tinting and coating the window glass will also reduce visible light transmittance, says Holcombe.

Tinting, as the name implies, means applying a light color, often of bronze, grey, green or blue, to window glass. Tinting blocks a certain amount of the entire spectrum of sunlight entering a building. The amount depends on the color and density of the tint.

A low-e coating has another advantage: It allows daylight to enter the building. A building that makes greater use of daylight can see a payoff in lower lighting energy use. A tinted window, by contrast, will likely increase lighting costs. Between 20 and 55 percent of the energy costs in a building may go to lighting, depending on building type, Ziemetz says.

On the other hand, for some buildings in warmer climates, the shading provided by a tinted window may help keep the interior comfortable. There’s a price difference between the two methods, as well. Tinting typically adds about 10 percent to the cost of the window, while a low-e coating may bump up the price by about 33 percent, says Lawrence. The upshot? Facility executives should determine which methods will reduce energy and heat transmittance for their buildings most cost-effectively.

“It’s really driven by geography and aesthetics,” says Michael Klahr, Marvin’s business development manager in the Northeast with the firm of A.W. Hastings. “The decision to use a tint for energy purposes is more common in the south. A tint in the north is usually more of an aesthetic issue. Low-e coatings are fairly standard everywhere.”

Three types of aluminum finishes offer different levels of performance, says Arnold. Acrylic finishes are the least expensive. However, the color may fade or bleed into the surrounding brick over time. Depending on the climate, this can occur in less than a year, he says.

Fluorocarbon finishes — sometimes referred to as Kynar or polyvinylidene fluoride (PVDF) finishes — come in two varieties. The first is composed of a 50 percent fluoropolymer resin material. While more expensive than acrylic, it’s less prone to chalking and fading. The second, which contains 70 percent fluoropolymer resin, is even more resistant to chalking and fading. When choosing the finish, “think about how well you want to retain the integrity and color of the finish,” says Arnold.

Vinyl frames also are growing in popularity in the commercial market, says Hooper. One reason is their pliability, which makes them useful in custom-designed windows.

For some projects, facility executives prefer the look of wooden window frames. Today’s wood frames tend to be more durable than those installed decades ago, as they’re treated to resist rotting, mold and termites.

“Wood frames if properly maintained, such as painted every three to five years, will hold up well and will even take some of the abuse an aluminum frame will take,” says Marvin’s Klahr.

Facility executives will want to check whether the replacement aluminum window frames are thermally broken. This means that the metal that’s exposed to the outside is separated from the metal exposed to the interior of the building by a layer of insulating material, such as plastic or polyurethane, says Holcombe. If the window frame isn’t thermally broken, any metal frame will conduct heat.

Another feature to check for is an “edge spacer.” These are made of low thermally conductive materials and are placed around the perimeter of the windows to separate the panes of glass and reduce heat loss, says Tom Mifflin, research and development manager with Wausau Windows. The spacer also will prevent moisture from entering inside the window system.

Finally, windows can be engineered to reduce the transmission of sound to the interior. While it’s difficult to put a dollar benefit on this quality, a quieter building can enhance occupant comfort. To gauge how well a window reduces noise, facility executives should examine its sound transmission class (STC). The higher the number, the more sound a window blocks.

Two methods are used in window construction to reduce sound transmission, says Hooper. In the first, the manufacturer presses a sheet of PVB (polyvinyl butyral) between the two panes of glass to alter sound waves as they come through the window.

In the second method, the manufacturer installs two sets of two windows that are housed within one frame; this is known as a “quad-hung” window. The installation is similar to that of a standard window, although the opening needs to be thick enough to accommodate the four panes.

The costs of new windows also will vary with the method of window replacement chosen. In general, facility executives can choose from three processes, says Ziemetz. “The worse shape the window is in, the more you have to do,” he says.

The most extreme is the complete tear-out, in which everything — window, frame and sash — is removed. The window is stripped to masonry, and a new one is inserted. Not surprisingly, this has the highest price tag. In addition, it may be impossible to do without disturbing existing walls.

A less-invasive approach is to leave the frame in place, but recover it with a panning system or trim. The operable part of the window is removed and the new window is set into the panning system. This way, the existing wall isn’t disturbed, yet the look is that of a new window.

Finally, if the existing frame is in good condition, the building owner may decide to continue using it and just replace the window itself.

Of course, cost is always a concern when a window project is under consideration. Facility executives have several options besides replacement. One is keeping the existing windows, but adding a film to cut the amount of energy lost through the window.

Many facility executives install solar control film, says Joe Chernov, spokesperson for Madico Inc. These films, which are applied to the existing glass, can reduce the amount of infrared and ultraviolet light, as well as light transmittance.

Solar-control film costs between $5 and $7 per square foot installed; the final price tag will vary with the color and thickness of the film. Facility executives will want to check with the building’s energy provider, as some offer rebates when owners install solar-control film, Chernov adds.

Safety and security film is designed to hold the glass if the window is broken. “It’s a powerful adhesive on the glass so the shards don’t fall out,” says Chernov. It costs between $7 and $12 per installed square foot.

Another option to complete window replacement is to install a storm window — that is, an additional glass pane that is placed next to the existing one. “This is an insulating panel to save energy and reduce sound,” says David Martin, president of Allied Window Inc.

Sometimes referred to as “performance panels,” storm windows can be installed either inside or outside the original glass pane, says Martin.

The units are spaced with a 1- to 2-inch gap between the storm window and existing window. The greater the distance, the greater the energy efficiency and the better the sound reduction. The single glazed units can cut sound transmission by 50 percent.

Facility executives working on redeveloping historic buildings also may want to consider storm windows, as they can help preserve the original look of the window while cutting energy loss. That can be important if the building owner is trying to qualify for federal tax credits by completing the renovation according to The Secretary of the Interior’s Standards for Rehabilitation, which typically requires the building to maintain its original appearance.

Duerkop says storm windows s are available for sliding, double-hung and fixed window installations. “Units are typically custom built to match the existing window, which is important in historical restorations,” he says.

The existing window frame needs to be in reasonable shape, or adding a storm window probably won’t make sense. If the frame is rusting or deteriorating, it may be necessary to repair or replace it before adding the storm window.

No matter which strategy facility executives choose, they’ll want to enlist professional help. While window replacement may seem like a straightforward task, “windows and doors are areas for water and wind to infiltrate the building,” says Hooper. When that occurs, the result can be painful and expensive repairs or higher energy bills. 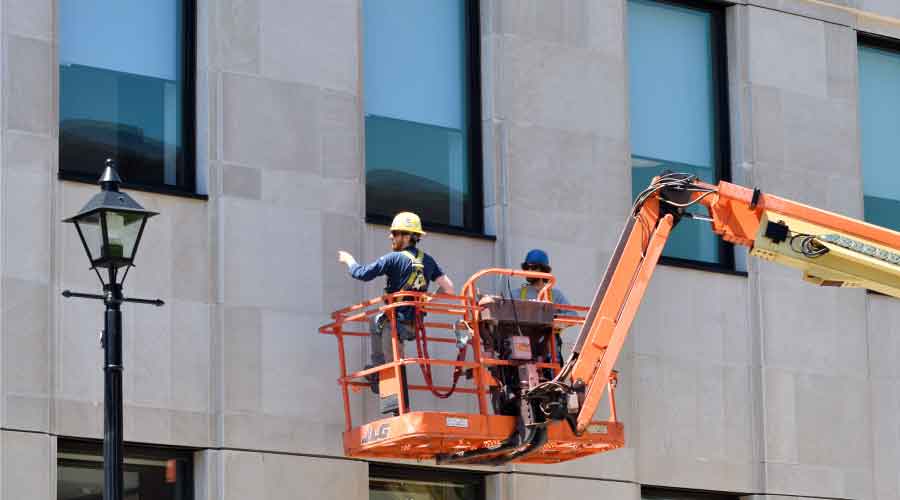