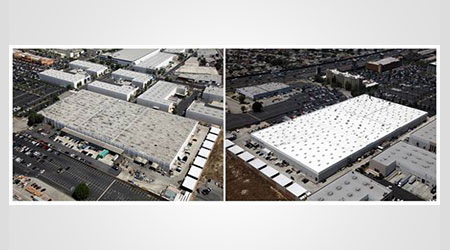 A before and after look at the 210,000 square foot American International Industries cosmetics manufacturing facility roof, reroofed by Highland Commercial Roofing.

The facility, built in 1968, is a multipurpose commercial building broken down into three segments with offices in the front, manufacturing in the center and a warehouse in the back.

"There were several specific challenges that we faced on this project with this being a multipurpose commercial building," said Ernest Orchard, owner of Orchard Roofing & Waterproofing Consultants, who was contracted by American International Industries to help evaluate and value engineer the best course of action for reroofing the facility. “One major concern was that we could not have a speck of dust or water fall into the manufacturing segment of the building during the reroofing process. This meant we couldn’t be caught with the roof open, especially during inclement weather.”

Orchard worked with Rick Cunningham, president, and Eric Linzmeyer, senior project manager and director of business development, both of Highland Commercial Roofing, to come up with a plan to reroof the facility without affecting the manufacturing segment, or the operations in the office or warehouse.

“Rick and his team went in and corrected the obvious deficiencies,” said Orchard. “They cut and patched the blisters in the existing roofing system and built up low areas in the roof to minimize standing water. Then they applied a Western Colloid Roofing System consisting of 2-plys of polyester reinforcement imbedded in asphalt emulsion at ambient temperature and protected with a bright white UV reflective elastomeric surfacing, providing a seamless ‘Cool-Roof’ roofing system for the facility. As part of the project, they brought in TuffWrap® to install a flame retardant suspended cover on the underside of the roof deck to catch any water, dust or dirt that might have entered the building during construction so the building could be kept in operation. Overall it was quiet, it was clean, and it was very efficient.”

In addition to reroofing the entire 210,000 square foot roof, Highland Commercial Roofing also installed 295 polycarbonate dome UL Listed SKYCO smoke vent skylights with a VORTEX louvered base, a redesigned version of the older louver systems that were prone to leaking. These skylights not only allow smoke to vent and reduce heat buildup in case of a fire, but are also designed to help reduce heating and lighting costs.

“Besides providing ample daylighting, these smoke vent skylights help to reduce safety liability as well,” said Cunningham. “They double as lifesaving devices, as each smoke vent is designed with two thermal triggered fuses that automatically open up in the event of a fire. Fire marshals and insurance companies often require UL Listed smoke vent skylights, and the polycarbonate domes exceed OSHA fall protection requirements by four times that of acrylic skylight domes. During the reroof planning phase we knew it was important to replace the old acrylic skylight smoke vents that were less efficient so that American International Industries could maximize their reroofing investment.”

To learn more about Highland Commercial Roofing and their services, visit http://highlandroof.com/.