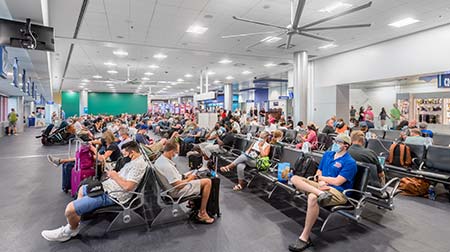 During the early stages of the COVID-19 pandemic, numerous government agencies along with professional institutions issued guidance regarding the operation of circulating fans. This guidance recommended that building owners and occupants avoid operating circulating fans based on an assumption that the circulation generated by the fans would lead to increased transmission rates within a building if an infected individual was present. This recommendation was not rooted in research or prior practice for other airborne diseases. As temperatures reached record highs in 2020 and 2021, this guidance further increased heat stress and the frequency of heat-related illness among essential workers in challenging work environments. A significant number of quantitative and numerical studies have been performed regarding the performance of circulating fans and the best application of the fans in a typical installation in a large industrial space. However, few to none of these studies have examined the potential effects of fan operation on airborne disease transmission in these spaces. This knowledge gap became all the more noticeable and led to premature guidance regarding the use of circulating fans.

In response, Air Movement and Control Association (AMCA) International commissioned a numerical computational fluid dynamics study of particle and aerosol transmission in a typical warehouse space with large diameter ceiling fans (LDCF—fans greater than 7 feet in diameter). These midsize warehouse spaces are the backbone of manufacturing supply chains and e-commerce fulfillment systems, both of which have been important in responding to and weathering the COVID-19 pandemic. These facilities are also often under-conditioned in the summer months and can expose workers to significant heat stress and heat illness risk.

To ensure the integrity and accuracy of the study, AMCA formed one team of experts across the HVAC industry to ensure the proper selection and application of the products and another team of experts in airflow modeling, infectious disease transmission, and indoor air quality. Members of these teams include leading academics, members of the ASHRAE Epidemic Task Force, and notably, engineering leaders from Big Ass Fans, a proud member company of AMCA International.

The modeling environment is based on the U.S. Department of Energy (DOE) reference warehouse building for energy modeling studies. The building measures ~50,000 square feet and is 28 feet tall. Two 20-foot diameter AMCA-certified LDCFs are modeled as they would be installed near the docks and prep areas in a typical warehousing application. The building is modeled in Chicago, Illinois with TMY3 climatic data.
Simulation results are reported for both the whole warehouse breathing zone and the breathing zone in a defined work area where workers are present. Most of the results are focused on a work area with six occupants, one of which is presumed infectious, arranged in two sets of three across a conveyor from each other as seen below. LDCF operation covered three speeds (100%, 20%, and 0% of max RPM) in both the downward and upward blowing configurations. All variable combinations resulted in 223 unique parametric CFD simulations, representing more than 3.2 billion unique data points and more than 1,300 hours of supercomputer computing time. 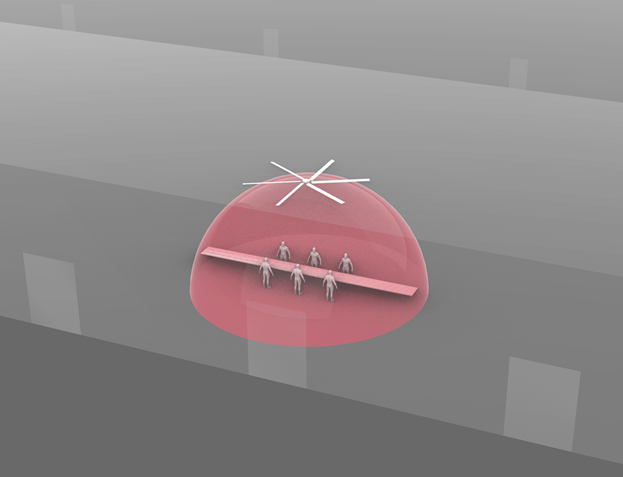 A model of six workers in the breathing zone underneath a large diameter ceiling fan.

In the model, one of the six occupants at a conveyor belt is presumed infectious.

The results of the study show a clear relationship between two study variables (fan speed and direction) and infection risk. The mechanics of this relationship are based in both limiting the residence time of high concentrations of infectious particles in the occupant breathing zone and utilizing the air mixing provided by fans to dilute localized concentrations of particles to the entire building air volume, driving particle concentrations lower on a given dose-response curve. With regards to LDCF speed, fan operating points that result in higher air speed at the occupant level reduce occupant exposure to infectious particles and encourage the most comprehensive air mixing in the warehouse. This is especially true for applications where air speed is greater than 0.9 m/s in the working area breathing zone. With regards to LDCF operating direction, it was shown that the downward blowing configuration resulted in better whole space mixing and therefore reduced occupant exposure to infectious particles.

For building owners and operators, the AMCA International study makes the following recommendations for LDCF operation that are fully supported by Big Ass Fans engineering leadership: 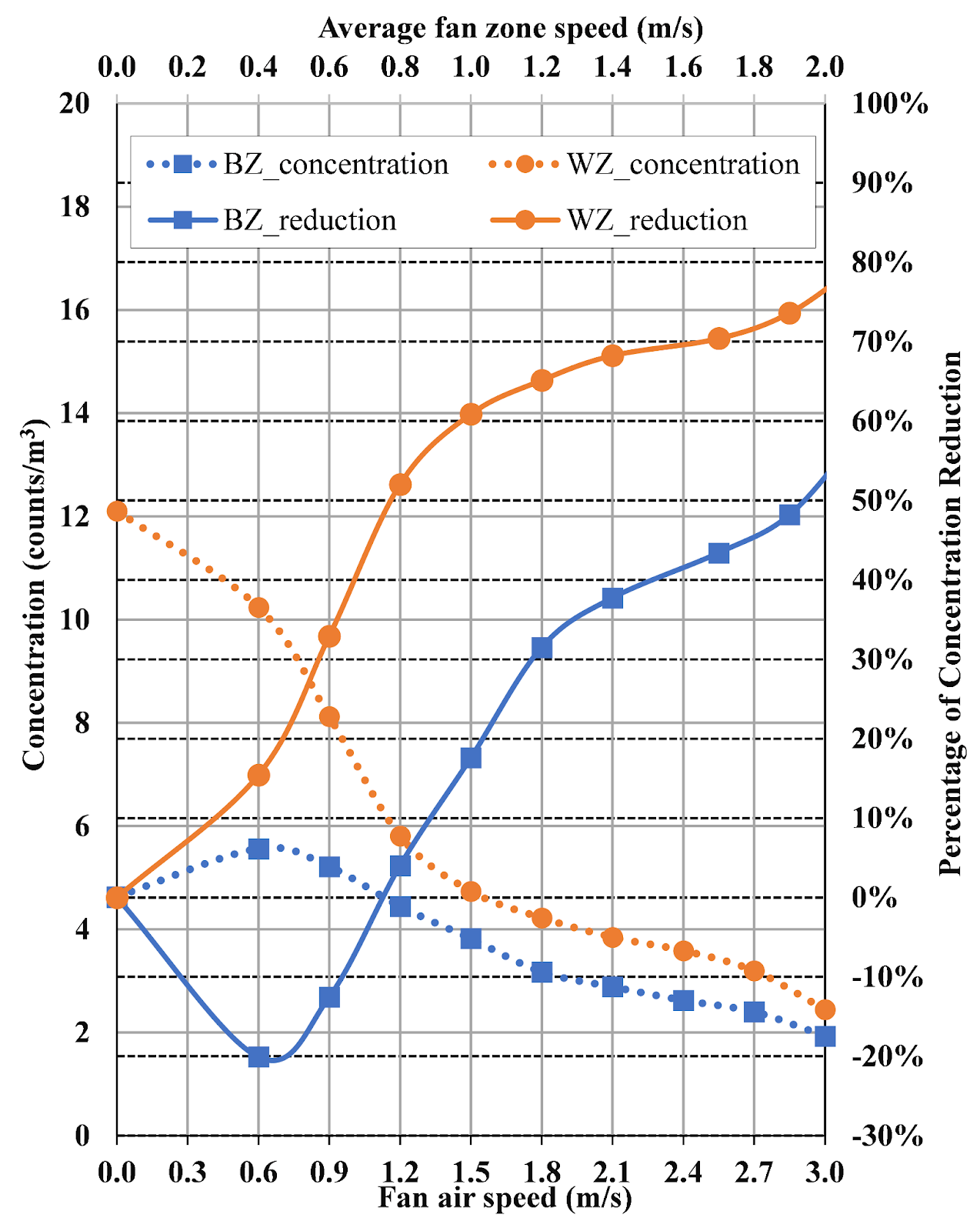 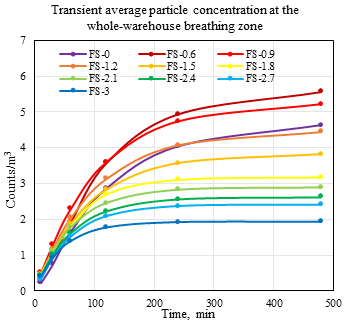 Big Ass Fans would like to thank AMCA International for commissioning the study, Liangzhou (Leon) Wang, Ph.D., P. Eng. and his team at Concordia University for the modeling, and to all members of the science and industry teams for their contributions to the study. Big Ass Fans remains committed to advancing the science and adaptation of LDCF and other air movement products through rigorous research, exceptional design, and industry-leading application knowledge and tools.