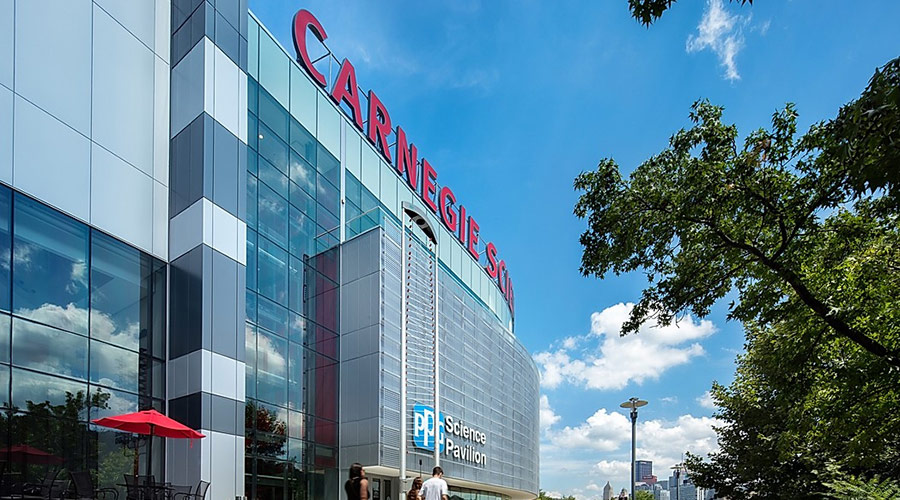 It starts with a white piece of paper or a vision in the architect's mind.

What will this new building look like? How will it spread across expansive acreage or pierce the downtown skyline? What statement will it make when it opens? How will it serve its occupants for years to come — in functionality, in enduring value and in energy efficiency?

For designers and architects, many of the answers to these key questions lie in the kinds of products specified to execute on the overall vision.

Products that deliver on aesthetics and energy performance are even more valuable when they are also versatile, which means they can be used to solve a variety of design challenges, increase efficiency on the job site and ultimately help contractors adhere to strict timelines.

Products for the building envelope designed and engineered by CENTRIA answered the versatility challenge — for a new North Carolina hospital, and for an addition to a popular museum in Pittsburgh. 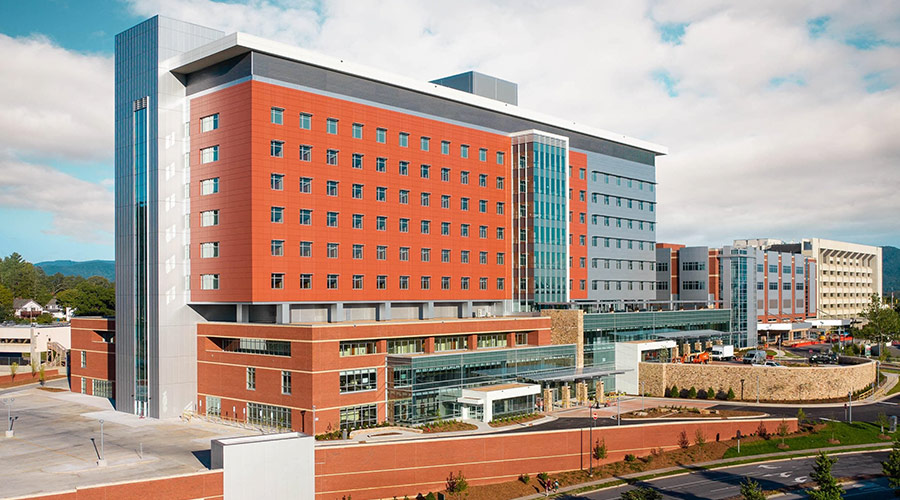 A New Address for Healthcare in Asheville

The 630,000-square-foot, 12-story facility expands emergency department services and patient capacity. It includes 220 patient rooms, a 94-bed emergency room, 11 interventional and cardiac catheterization suites, eight digital operating rooms, and an outdoor terrace on the third floor. The $400-million tower was in the planning stages for nearly a decade.

Designers ultimately chose solutions manufactured by CENTRIA for several parts of the building's exterior, including the two towers that sit on either end of the new building and encase both elevators and staircases. They did not want the towers to appear utilitarian or commercial. Rather than using stone, masonry or concrete, designers sought to source an external wall solution that would be flat and smooth, delivering a modern and sleek look.

The chosen product — nearly 20,000 square feet of Formawall Dimension Series from CENTRIA in a vertical orientation.

"The architect really put to use what Formawall Dimension Series does well, and that's cover opaque surfaces with a very flat-looking surface and also affording them the necessary insulation," said Joe Creighton, president of SECO Architectural Systems. "The results were fantastic." 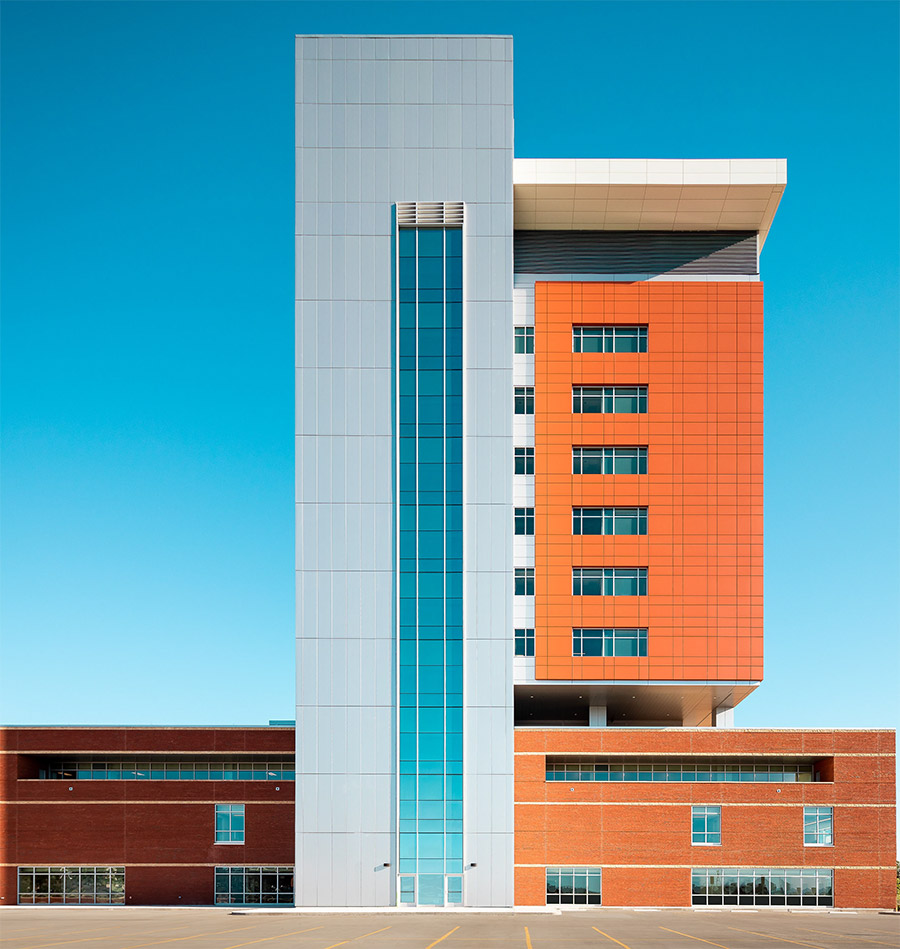 CENTRIA's Formawall high-performance building envelope system consolidates six wall components into one product for distinct architectural profiles in both horizontal and vertical orientations. Formawall comes with concealed clips, fasteners and sealants with insulated metal vertical joints and a pressure-equalized side joint to help prevent water infiltration. The panels are factory foamed in place, minimizing the potential for gaps within the panel. They also integrate with most glass wall, window and CS louver systems.

At the crown of the building, architects specified decorative louvers to add to the structure's aesthetic appeal. At the same time, it was important to create a moisture barrier for the crown. That meant specifying an insulated rain barrier behind the louvers, and CENTRIA's MetalWrap delivered the right performance metrics.

"In one step, you have an insulated weather barrier behind louvers. When the louvers did go on, the building was already dry. It was a time saver in that regard," Creighton said of MetalWrap. "It's really easy to install. Very user friendly."

On the building's podium (between the two metal towers), architects decided to use CENTRIA's Concept Series single-skin wall panels in a variety of places. They created a visual break from the masonry, which served as the primary cladding in that area of the building.

"The Concept panels have a ribbed profile and gave a little more interest to the podium level of the building," Creighton added.

Concept panels feature concealed fasteners and a common-lock joint that allows the panels to be integrated with each other. They can be installed vertically or horizontally with an unbroken appearance, adding to the product's aesthetic versatility.

Mission Health North Tower opened in the fall of 2019. 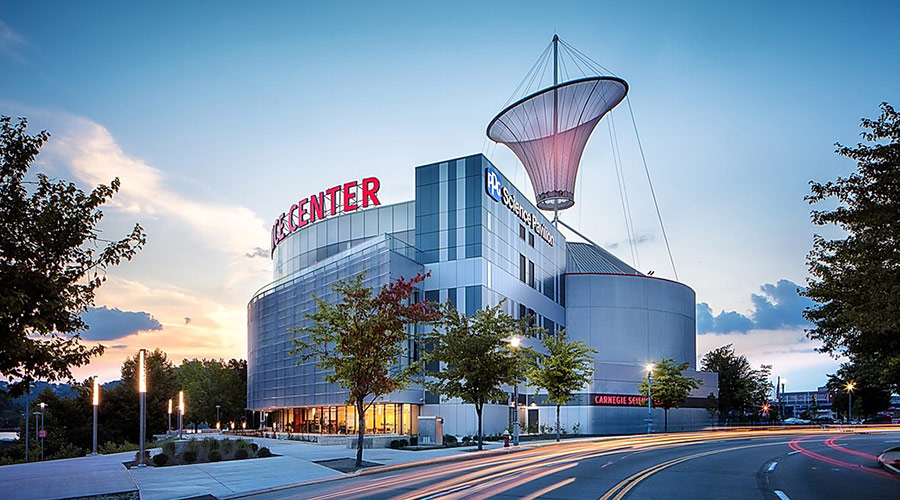 An Experiment in Expansion

Architects and designers faced a different challenge when they began planning for an expansion to the Carnegie Science Center, the most popular museum in greater Pittsburgh. It serves as a place for people of all ages to conduct hands-on exploration of science and how it connects with everyday life. Opened in 1991, the center was the recipient of the National Award for Museum Service in 2003.

The museum's popularity drove the need for an expansion to accommodate STEM education programs for area children along with traveling exhibits that draw regional crowds. In addition, museum directors sought to create more event space.

The result was the PPG Science Pavilion, a $33-million, four-floor expansion to the museum on the city's North Shore.

The key question: How do you replicate the look of a building that opened three decades ago and apply it to an addition while also adhering to modern design standards and much stricter building codes?

When architects began the design process, they had to take into account the notion that the original museum was clad in custom-designed metal panels that had been manufactured decades ago.

"We really needed a product that would align itself well with the spacing, the sizing and the aesthetic appearance of the existing panels while bringing in the modernity of a functional system," said Ryan Indovina, principal at Indovina Associates Architects. "We were really focused on trying to achieve the aesthetic appearance but also the performance standard that the science center was looking for."

Indovina and team were also charged with sourcing materials from a local provider.

CENTRIA's Formawall Dimension Series presented itself as the optimal solution. In this case, the Formawall Dimension Series 3"-T panel was able to be sized and shaped to meet the needs of the project and covered 11,500 square feet of the building. The panel is engineered to provide outstanding aesthetics and value along with maximum thermal performance and moisture control in a single component.

Part of the addition needed to be a "black box" without external windows since it would house the traveling exhibits. To ensure the building remained visually interesting on the exterior, Indovina and team integrated the CENTRIA metal panels with an outer scrim board for a double-layered facade. The perforated boards created depth while the Formawall boards served as the moisture and insulation barrier.

"The CENTRIA panel offered the opportunity to have a consistent manufactured panel that provides that weather barrier whether it's behind that scrim or fully visible," Indovina said, adding that the new panels also coordinated well with old sections of the building when the two were finally connected.

"The aesthetic of the building ended up being almost exactly in line with what we intended in the initial design phases," Indovina remarked.

The PPG Science Pavilion opened in the spring of 2018.