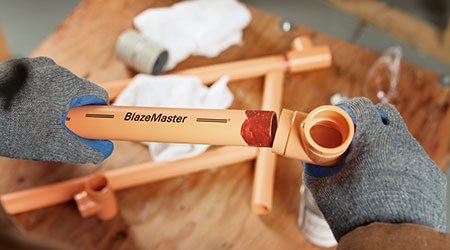 Material selection is a first priority when planning a fire protection system, whether in new construction or a retrofit. Facility managers have two options for pipe and fittings: steel or CPVC.

While steel remains a popular choice, CPVC pipe offers significant advantages for commercial projects as well as residential applications. CPVC pipe is lightweight, easily fabricated, flexible and resistant to corrosion. CPVC has a Limiting Oxygen Index (LOI) of 60; since air contains only 21 percent oxygen, CPVC is self-extinguishing and will not burn unless a flame is applied. 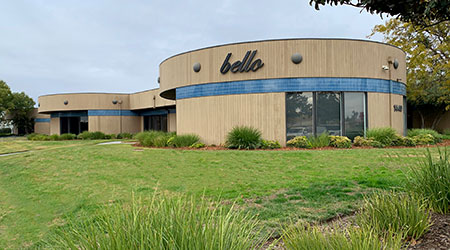 Reduced Costs for a Commercial Retrofit

Those advantages made CPVC pipe the perfect solution for retrofitting a 24,000-square-foot commercial office building complex in Sacramento, California. The complex includes three light-hazard occupancy buildings connected by combustible breezeways that needed to be sprinklered. The 50-year-old structures had never had sprinklers installed, and local government was requiring them.

The remaining two office buildings, totaling 16,000 square feet, required the installation of 240 sprinkler heads in combustible concealed spaces. By using CPVC pipe, Alwest reduced its labor by about 35 percent, said Bill Norwood, President of Alwest. He estimates that using CPVC instead of steel saved about 100 man-hours over the two buildings. 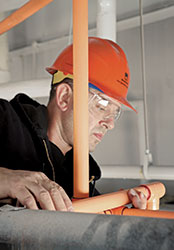 CPVC reduces installation costs for a variety of reasons. For starters, steel is heavy. It requires special equipment to move around a job site and often two or more installers working in the same area. Its rigidity makes it difficult to maneuver through tight spaces and install in hard-to-reach areas. It also requires torches and loud threading machines to fabricate and join the system, which means costly hot-work permits, prefabrication, and vacating occupants from the premises.

By comparison, CPVC piping systems weigh less, are flexible, and are joined together using a quick, one-step solvent cement process. This reduces labor costs since one contractor can install an entire area by himself/herself and fabrication can easily be completed on the spot.

CPVC installation is also cleaner and quieter, which creates minimal disruption for building occupants. At the Sacramento retrofit, the work was done overnight, and crews needed to ensure the job site was cleaned up so a doctor’s office in the building could start seeing patients in the morning.

“With steel, there would have been much more cleanup required and equipment to relocate before the crews ended work for the night,” Norwood said.

The $21,000 in cost savings Alwest created for the building owner by choosing CPVC will grow over time because CPVC doesn’t corrode. Often with steel pipe, corrosion eats away at the interior of a pipe creating pinhole leaks.

Once corrosion starts in a steel system, “You repair it until it can’t be repaired anymore, then you have to replace it,” Norwood said.

Steel pipes are also prone to scaling, which happens when dissolved minerals drop out of the water and attach to the pipe wall, often near fittings and corners. As this scaling builds up, it can limit or even prevent the flow of water entirely.

By comparison, CPVC pipe resists corrosion and scaling for the life of the system, even in salt air environments or with fluctuating water pH balances. CPVC is also naturally immune to microbiologically influenced corrosion (MIC). BlazeMaster CPVC is designed for a 50-year service life. 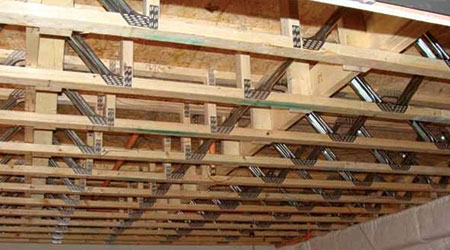 By eliminating corrosion and scaling, CPVC pipe also delivers reliable hydraulic performance to ensure enough water reaches a fire. A pipe’s surface has a direct impact on this—the rougher the surface, the more energy is needed to pump the water through the system. With steel pipe, corrosion creates more friction along the surface. The more friction, the slower the water flows in the event of an emergency.

The Hazen Williams formula was developed to help calculate this by measuring the friction and roughness along a pipe material’s surface. For instance, BlazeMaster CPVC has a Hazen-Williams C-Factor of 150 and retains this rating throughout its life. Conversely, new steel pipe starts with a C-Factor of 120, which dropped by over 50 percent for pipes that were in service for between 4 and 40 years. Over a relatively short period, steel pipe’s surface deterioration limits the fire protection system’s hydraulic performance as compared to CPVC.

Additionally, the long-term smoothness of CPVC pipe can often mean smaller pipe sizes are required for the same level of flow security in a fire protection system. This can result directly in builders and homeowners saving on installation costs.

Based on his experience with the Sacramento office project, Norwood said he is enthusiastic about using CPVC pipe for future commercial projects. He is hopeful that the success of this project will encourage other sprinkler contractors and building owners to consider the use of CPVC pipe in nonresidential settings.

“Using CPVC pipe was not top of mind for me prior to this project, but now I’ll always consider it for future commercial retrofits as well as residential applications,” he said. “The ease of installation gives CPVC pipe a clear advantage over steel in many situations.”