Building Reliability Through Dispatchable Assets in a Microgrid 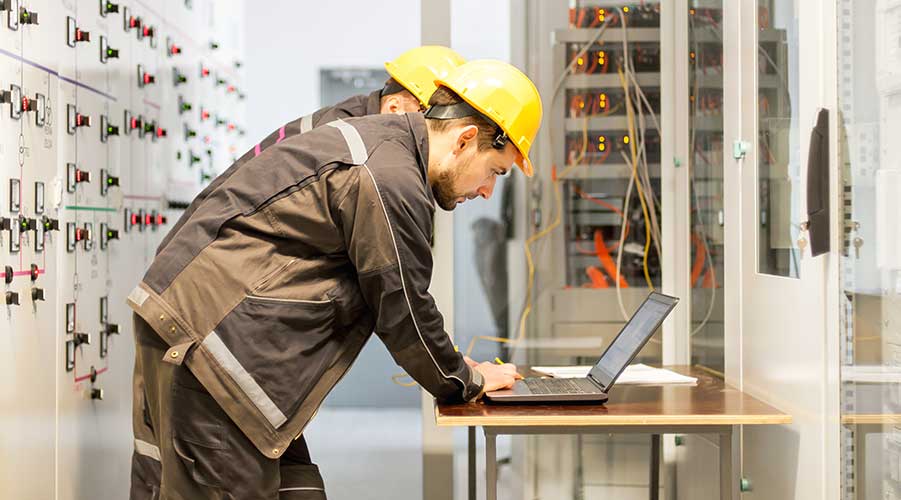 Building Reliability through Dispatchable Assets in a Microgrid

As more renewable energy sources and battery storage units are being incorporated into power systems, building managers are faced with many challenges which could impact the resiliency, sustainability, and economics of their facility.

Today, power consumers can become power producers as roof-top solar, behind-the-meter generators, and battery energy storage systems become more economical and ubiquitous. Additionally, concerns about the reliability of the traditional utility electricity due to its aging infrastructure, extreme weather events, and more sensitive loads have led to wider adoption of microgrids. By incorporating on side Distributed Energy Resources (DERs), facilities can benefit from the cost savings and increased reliability of a microgrid.

What Is a Microgrid?

A microgrid is a local energy grid connected to loads with control capability. Microgrids can be disconnected from the traditional grid and operate autonomously. Some microgrids may be entirely off-grid and be the prime power source for the end-users it serves.

Microgrids may incorporate a variety of traditional and renewable power sources such as diesel or natural gas generator sets, wind turbines, solar panels, fuel cells, and energy storage. Facility managers should work with a reputable power system supplier who fully understands the power system design space to ensure a well-engineered solution which will achieve the project objectives.

Solar panel require a large amount of physical space unobstructed by shade, but their costs have been falling steadily. Due to the extremely low or even non-existent marginal cost of generation, PV panels can be a valuable asset in a microgrid. They are, however, a highly intermittent power source and alone cannot provide uninterrupted power. As a result, they are increasingly being paired with battery energy storage systems to ensure greater utilization and reliability. 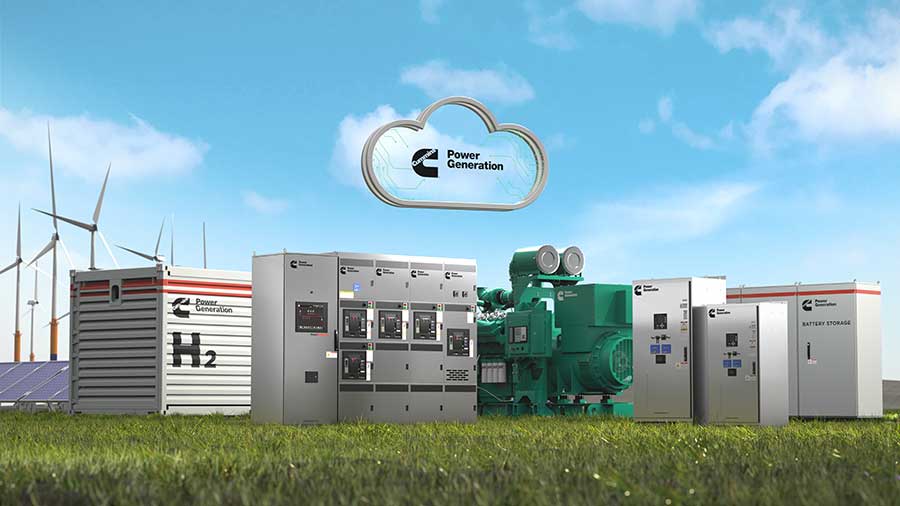 Battery Energy Storage
storage when coupled with intermittent energy sources like PV panels can address the curtailment and irregularity of renewable energy sources. During the day when solar energy is abundant, energy produced in excess of the load demand can be stored in batteries to be discharged overnight rather than being curtailed. Batteries can also be charged by utility power, if allowed by the utility, when utility rates are lowest and discharged during high-rate periods or to avoid costly demand charges.

As with PV panels, batteries are a DC power source and utilize inverters to charge or discharge to an AC electrical system.

Other Technologies Used In Microgrids
can also utilize other power technologies such as wind turbines and fuel cells. Wind turbines, like PV panels, are intermittent sources which produce power when there is adequate wind. Geographic location has a major impact on the viability of using wind energy in a microgrid but in the right location can be very beneficial.

Fuel cell technology has been steadily improving with higher efficiencies, increased power density, and reduced costs. Having a good understanding of the expected operation and fuel availability can help aid in selecting the right fuel cell technology.

Inverters
connect the DC output of solar, storage and fuel cells to an AC network, the DC output must be inverted to AC power first. Inverters, which are semiconductor-based electronics utilize Insulated-Gate Bipolar Transistors (IGBT) to invert the DC power to AC power by turning on/off the IGBTs at a pre-defined sequence and speed to generate pulses of currents which is known as modulation. Additional filters and other electronic devices are used at different stages of the conversion to produce a clean sinusoidal waveform.

Generator Sets
PV panels and batteries are DC power devices, most electrical equipment utilizes AC power. A generator set, by its nature, generates AC power and can directly be used to power AC loads on demand and can be paralleled with other AC power sources such as the utility grid.

Incorporating a synchronous machine into a microgrid application has many benefits as they are dependable, dispatchable energy sources which, if fuel is available, can always be utilized to meet the electrical load demand. Generators, with their high-power density, can start quickly, accept large block loads, and provide a reference to grid following components such as PV or battery inverters. With intelligent controls in modern generator sets, autonomous synchronization and load sharing can be done at the equipment level. There are a wide variety of generator sets available at various power levels that accept different fuel types, operate for various duty cycles, noise levels emissions levels. Generator sets also provide inertia to a microgrid system that many inverter-based energy sources cannot provide, contributing to the overall stability of the system.  Some microgrids, consisting of synchronous generators and PV energy for example, will require a minimum capacity of synchronous generators to always be operating in order to maintain inertia. 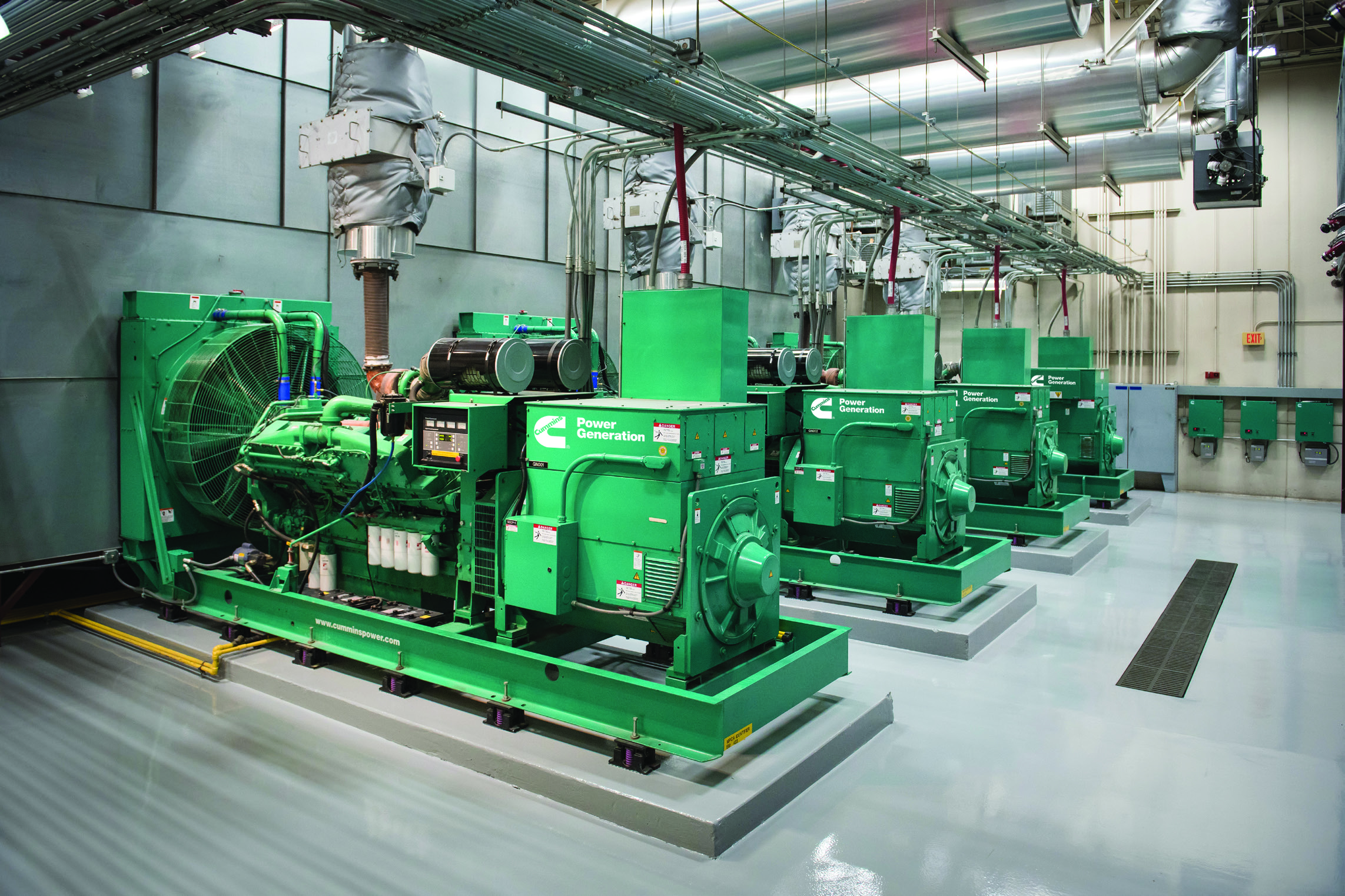 Two common concerns when utilizing generator sets for microgrids and prime applications are noise and emissions with increasing pressure to be environmentally and socially responsible. Modern generator sets are available which exceptionally low emissions due to advancements in combustion and after-treatments technologies. Additionally, low carbon fuels such as Renewable Natural Gas (RNG), Hydrogenated Vegetable Oil (HVO) and biogas can be used for low carbon and even carbon neutral operation. Noise can be addressed through highly sound attenuated enclosures and buildings. Noise and emissions at the site level can also be minimized through intelligent controls which optimize the use of each asset in the microgrid to minimize the duration and timing of operation and therefore minimize noise.

To parallel or connect alternating power sources, several characteristics of the AC output voltage must be the same or within an acceptable range. It is essential that the waveform and phase sequence are the same. Also the frequency, phase angle and voltage amplitude must be within the acceptable range to safely and effectively parallel the AC sources.

The load govern function applies when a generator set, or multiple sets are paralleled to a utility or the grid.  Because the utility voltage and frequency are fixed, the generator sets regulate their kW and kVAR output, instead of their frequency and voltage.

It is expected that the synchronous generator’s onboard paralleling controls to have paralleling and protection capabilities built in and would be responsible for all the following:

Inverters are responsible for the lower-level synchronization, protection, and metering.  However, one essential aspect when paralleling is load sharing across all the sources. Load sharing across synchronous generators is simply accomplished via the on-board paralleling control. When it comes to load sharing with inverters, one method would be to set the generator sets to operate as the utility (load sharing/grid forming) and the inverters would operate in grid following and act like a constant real-reactive power (PQ) source. And an external control system would send these PQ commands to the inverter.

At the heart of any microgrid power system there must be an autonomous controller. The microgrid controller is expected to do, as a minimum, the following:

Microgrids can provide significant benefits for resiliency, sustainability, and cost savings to facilities. Assessing a building for a microgrid should begin with a feasibility study and stability analysis to determine the best mix and sizing of the generating and storage assets to meet the building demands and project goals. The sequence of operation will be written to ensure system resiliency and power quality with mitigated failure modes. The integrated paralleling and protection controls for the synchronous generator sets as well as the microgrid controller are critical components to ensure seamless operation, system recovery, failure mode analysis, and system optimization. Working with a reputable power system supplier who fully understands the power system design space can ensure a well-engineered solution to meet the facilities demands.